On Thursday, it's all about image. An Australian team newly humble in both prospects and disposition will appear before us on a new cricket network. All that can be said for certain is that both medium and message will be determinedly upbeat.

The Test team's misadventures in its "gilded bubble" need no more recapitulation. Channel 9 was also seen to be lost in its own self-absorbed sphere. More probably, after 40 years, the broadcaster was tired and the public tired of them. In March, the same was true of the public and the Test team. Disillusionment was the order of the day; turn-off followed.

The Seven/XI era has started unpromisingly. In the Middle East, the national team was seen for what it was, short-handed. Back in Australia soon after, it was barely seen at all, except by pay TV subscribers. Ticket sales for this first Test are flat.

How much of that is natural downturn in a lean time, and how much is disgust with the new arrangements, remains to be seen. But Test cricket of all sports should be on guard against anything that alienates it. In England, the new fad is 100 balls an innings, not 100 overs. The game is trending towards self-imposed redundancy. 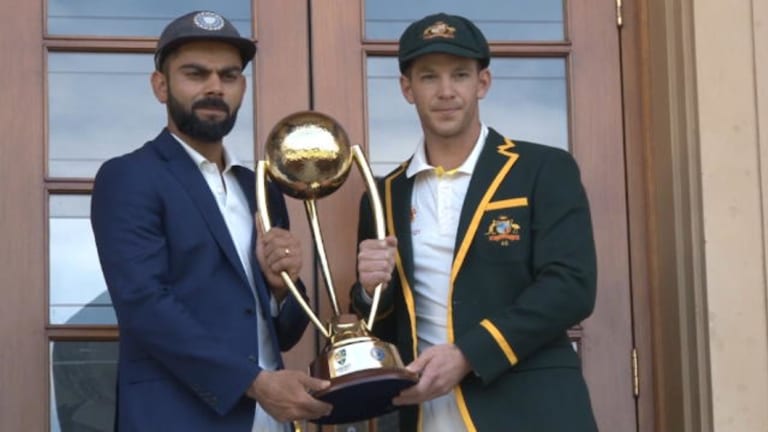 Notably, in their efforts to appeal, both team and telecaster have gone all retro. The team bang on about "respect", harking back to a mythical time when cricket was just cricket. On Wednesday, captain Tim Paine even brought a bit of baggy green iconography back into the conversation. Visually, Paine is the very image of the clean-cut Australian cricketer of yore.

Through the ACA, the players say they're desperate to reconnect with the grassroots. What they don't say is which gigs they will give up to make time for this altruism: Tests? ODIs? T20s? The IPL and its spawn?

Never forget that seeds of Cape Town were sewn at the end of last Australian summer, when Australia had so much cricket to fit in that it had two teams on the go at once, and for David Warner in particular, every day was Groundhog Day. But no alarm sounded.

Seven also is going back to go forward. It has dusted off Fanfare for the Common Man and our own Tim Lane, hoping as cricinfo's Daniel Brettig notes, to touch a Pavlovian chord. Alison Mitchell alongside Lane at the microphone is new ground, but she comes with a hint of BBC reassurance about her. Nostalgia is what it used to be, after all.

Indeed, one characteristic of the prelude to this series has been a sentimental lingering over, for instance, 1977-78, a plain team and time when WSC-ravaged Australia took until the last day of the series to beat India. Then, as now, it was about those stayed, and those who strayed.

Of course, Seven will have new tricks as well as old dogs. One, reportedly, will be a camera in the dressing room, discreetly aimed, of course, looking, as former Cricket Australia PR man Peter Young used to say, "to get 'em out from under their helmets". Getting them out from behind a paywall would work even better, but that bridge already has been burned, wilfully and wantonly.

To begin, we will all be flies-on-walls, all The Eyes of Handmaid's Tale infamy, sententiously alert to the merest misstep. It is only human nature. The captains are not promising high church solemnity, only that there will not be the pre-meditated, sustained and uncontrolled provocation that marred previous series. No-one expects anyone just to walk back to their mark and bowl, robotically, said Virat Kohli. Nor should they; that also is human nature.

Historically, India struggle in Australia, fading exponentially from one Test to the next. But they have rarely met an Australian team struggling like this one. The terms, like everything else about this summer, are unprecedented. But cricket is nothing if not counter-intuitive. Two years ago, a young opening batsman was as good as run out of his state by the frustrated coach. Now, that coach is in charge of Australia – and that batsman may well face the first ball on Thursday. Only that ball will be both new and expected.