Home » Sport » NFL WEEK 10: Our official predictions for who wins this weekend 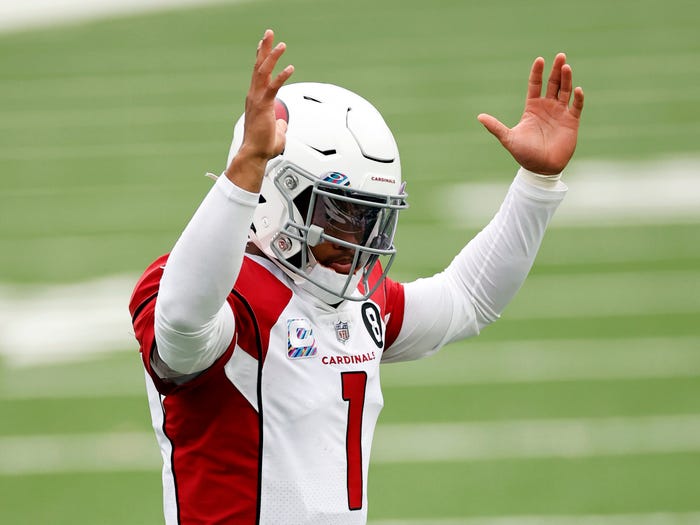 Halfway through the NFL season, it's clear that there has never been a year as difficult to bet on.

Schedules and rosters change at a moment's notice due to COVID-19. Sometimes a team's practice schedule is completely upended, but then by the time Sunday comes around, they'll be ready to beat the breaks off of their opponents, practice be damned.

So far this season, our picks have gone a middling 63-61-4 against the spread — far from a disaster, but you don't bet on football to break even.

Please take a look below at our best bets against the spread for Week 10 of the NFL season (* indicates home team).

This is shaping up to be a battle between the Titans' rushing attack and the Colts' stout rushing defense. When given the option, I'll usually bet on Derrick Henry.

The Steelers had to pull out quite a comeback to beat a battered Cowboys team last weekend. Now facing a division rival and a rookie quarterback coming into his own as a player, it doesn't look like Pittsburgh is gearing up for a blowout. This is an interesting one to think about betting on the moneyline as well.

Alex Smith is back under center for the Washington Football Team, two years removed from the injury that looked like was sure to end his career. He has to get a win, and there are few teams more willing than the Lions to give one up.

This game feels like a coin toss. If the Texans performance last week against the Jaguars was a sign of a turnaround coming, they could absolutely take this game. It feels like the Browns need it more, though.

Jaguars rookie quarterback Jake Luton played well in his debut last weekend against the Texans, throwing for 304 yards and a score and nearly leading Jacksonville to a comeback victory in the final seconds. Heading into Sunday's game against the Packers, Luton said it was "pretty surreal" to be facing off against the likes of Aaron Rodgers.

It's going to be even more surreal when he's trampling all over your defense.

As an Eagles fan, the plan for this season is to win the NFC East with a 6-9-1 record. To do that, the Eagles have to make the most of their games against divisional opponents. Coming off of a bye week, they should be able to take care of business against the Giants here.

Tom Brady just got embarrassed worse than he's ever been embarrassed in his two decades playing quarterback in the NFL. The Saints beat up on the Buccaneers so badly that they threw a dance party in the visiting locker room, and Brady was left to look around, wondering what had happened.

This is a good bounce-back spot for both Brady and the Buccaneers. They'll want to show they can destroy a team too.

I really liked this Broncos team heading into the year, but they're still a year or two away from becoming a real contender. Meanwhile, the Raiders sit at 5-3 and could wind up contending for a Super Bowl this year.

The Bills will be riding a bit too high off of their win over the Seahawks last weekend and be stunned when they realize that the Cardinals defense won't roll over on every play like Seattle did. Also, Kyler Murray should be talked about more as an MVP candidate.

The Seahawks couldn't stop the Bills' offense at all last weekend, and the prospect of facing all of the weapons the Rams have to offer feels daunting after such a poor performance. I'm betting that as bad as the Seahawks defense is, they can't play that terribly two weeks in a row, and Russell Wilson will be able to do enough to get his team over the line.

The 49ers are still dealing with injuries up and down the board, but this is too many points to spot Kyle Shanahan.

The Chargers have lost six of their past seven games, but none of those losses came by more than a touchdown, and three of them were decided by a field goal or less. Justin Herbert may be having the best season we've ever seen a rookie quarterback have. They're due for a win.

Meanwhile, the Dolphins have been on quite a run the past few weeks but have scored a defensive touchdown two weeks straight now. That's not the type of trend that keeps up for too long in the NFL. Fate catches up with both teams this weekend.

Last week the Jets put up 27 points on the Patriots defense. The Ravens should be able to top that, at the very least.

The Vikings look like a brand new team now that Dalvin Cook is back in the fold, but he's playing at a pace that feels unsustainable, averaging nearly 240 yards from scrimmage over his past two games. He's a superstar player, but he's got to come back down to Earth eventually.

Anthony Joshua would ‘hate’ me if I revealed the REAL reasons why he lost to Andy Ruiz Jr, admits Eddie Hearn – The Sun

Grading Yankees’ Hot Stove season — and what happens next