MIAMI GARDENS, Fla. — An unusual trickle of drama seeped out of Alabama’s buttoned-up football program earlier this month when it was reported that the former Maryland coach D.J. Durkin was spending time with the Crimson Tide coaching staff in Tuscaloosa.

Durkin had been fired as Maryland’s coach in the fall after a university investigation prompted by the death of a player after a strenuous practice. Once hailed as a rising coaching star, Durkin departed amid a hail of criticism and was broadly regarded as toxic, at least temporarily, in college football. His apparent involvement with Alabama, the exemplary team of this era, rattled many observers.

In response to the controversy, Coach Nick Saban quickly issued a statement in which he clarified that Durkin had not been hired in any capacity and that his presence was limited to “professional development.”

“He is simply observing our operation as many other coaches have done through the years,” Saban said.

But speculation that Durkin’s trip southward might have been a prelude to his joining the program was understandable, since several high-profile Alabama assistant coaches began their tenures after similar visits. Durkin also satisfied another criterion for a role on Saban’s staff: He is an obviously talented former head coach who, whether through misfortune or misdeed, has fallen on hard times. 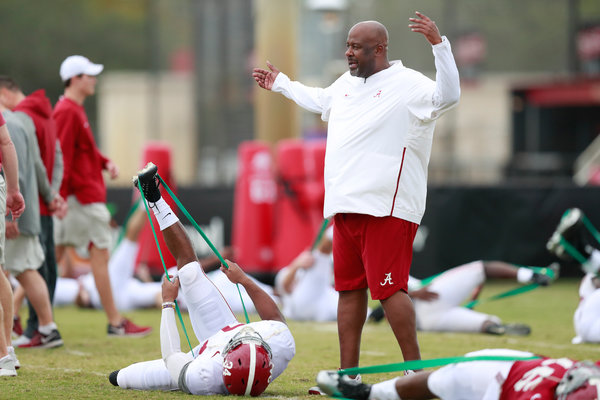 The “Nick Saban Witness Protection Program,” as the Alabama offensive coordinator Mike Locksley dubbed it earlier this month, has in recent years hosted a number of doghouse-inhabiting former head coaches, including Lane Kiffin, Steve Sarkisian and even Locksley himself, who as Saban’s offensive coordinator helped make quarterback Tua Tagovailoa a Heisman Trophy finalist and fine-tuned an offense that might be the most explosive in Alabama’s history.

“Boy, what an honor,” Locksley said of his time at Alabama, which will end after the College Football Playoff as he returns to head coaching. “And how great it’s been for me and my career to be able to rehabilitate.”

His experience was not unique. Butch Jones, fired after five lukewarm seasons at Tennessee, spent the past season as an Alabama analyst. Mel Tucker, once an interim N.F.L. head coach, re-entered college football as Saban’s associate head coach in 2015, and this month — after three seasons as Georgia’s defensive coordinator — landed his first top job, at Colorado.

The Nick Saban Witness Protection Program also nearly included Hugh Freeze — earlier this year Saban all but confirmed he had intended to hire Freeze, the scandal-tarred former Mississippi head coach, before the Southeastern Conference blocked it — and, were it not for the public outcry, might have welcomed Durkin, too.

All college football head coaches buy low and sell high. They recruit raw, teenage prospects whom they hope to develop into outstanding, 21-year-old players. They hire young assistants, benefiting from their youthful smarts and long hours before some other program poaches them and — for much more money — gives them a team of their own to run.

But while Saban certainly has sent many former assistants into their first top jobs, and while he excels at persuading the best high school prospects to play for him, he also has nursed a side interest in resuscitating careers that have gone off the rails.

It is the coaching equivalent of investing in distressed assets. Both Kiffin and Sarkisian had been fired by Southern California before joining Saban’s staff. Locksley was dumped early in his third season as New Mexico’s coach after going 1-11 in each of his first two years. Their second (or third, or fourth) chances with Alabama are worthy of further study — much like everything else Saban does when it comes to coaching.

“We have coaches who have a track record of being very, very good coaches, very productive, they make some mistake or get in some circumstance or situation that maybe creates this downward plummet, but they still have a lot of positive values,” Saban said Thursday, two days before the top-seeded Crimson Tide (13-0) will play No. 4 Oklahoma (12-1) in a national semifinal in the Orange Bowl.

“We can get them in our program, maybe they learn a better way to do things,” Saban continued. “But we also can take advantage of the good things they know and they’ve done.”

The arrangement, he concluded, “worked out well for both.”

Still, the practice of hiring coaches with checkered histories has provided fodder for critics who accuse Saban of prioritizing winning above values.

“Coaches really are by and large very willing to give another coach a second chance,” said Richard Southall, a sport management professor at South Carolina who specializes in ethics.

“I’ve been criticized for giving players second chances,” Saban said, “but I continue to do it, because I think in some cases — everybody makes mistakes. And for us to judge and condemn and put punitive penalties on people, that really doesn’t help their future. It condemns them in some ways to having maybe a much harsher future than they deserve.”

A Saban biographer, Monte Burke, pointed to several players with troubled pasts whom Saban actively tried to cultivate and protect, such as linebacker Rolando McClain at Alabama and running back Shyrone Carey when Saban was at Louisiana State.

“Nick was always about altering behavior,” Will Muschamp, a former Saban assistant who is now South Carolina’s coach, said in Burke’s 2015 biography of Saban. “If a person was willing to change, he’d help them. He’d do anything for them.”

Sometimes it has backfired. The controversy over Durkin created an unwelcome distraction weeks before the Crimson Tide’s playoff game. Sarkisian, who joined Saban’s staff as an analyst less than a year after his tenure at Southern California ended as he acknowledged issues with substance abuse, was Alabama’s offensive coordinator for exactly one game — a national championship loss to Clemson in 2017.

But the most notorious instance of Saban taking in a former head coach with a problematic past seems, on balance, to have worked out. This was, of course, Lane Kiffin. Though Kiffin’s worst sin as the (extremely) young head coach at Tennessee, U.S.C. and the Oakland Raiders was arrogance, he committed it flagrantly, and before Saban made him offensive coordinator after Alabama’s 2013 season, he was considered virtually unhireable.

But Saban hired him anyway, believing that he could use what was good about Kiffin and avoid what was bad by making him a coordinator — a role that, like for all Saban coordinators, came with a prohibition on speaking with the news media.

“I always thought he was a really good coach,” Saban said at the time, according to CBS Sports. “All his issues come from something we’re not asking him to do.”

Saban’s sideline brow-beatings of Kiffin were conspicuous, and the marriage ended a game ahead of schedule in January 2017, when Saban cut loose Kiffin, who had recently been named Florida Atlantic’s head coach, between the Tide’s playoff semifinal and the national championship game.

But by then Saban had squeezed plenty of good out of him; in those three years, Kiffin helped Alabama reach three postseason playoffs and two national title games — and did it with three different quarterbacks. Kiffin also modernized an Alabama offense that by 2013 had fallen behind the spread concepts prevalent at other top programs, setting the foundation for the past two seasons’ success.

And Kiffin may be not only older but wiser after his years in Tuscaloosa. “I should have been paying Coach Saban instead of them paying me because of the amount of knowledge that you learn,” Kiffin told the website SEC Country this year.

Saban’s biggest reclamation success yet, though, might be Locksley. His brief tenure as New Mexico’s head coach, which ended in 2010, featured a 2-26 record and a one-game suspension over what the university said was a physical altercation with his receivers coach. After Locksley served as Maryland’s offensive coordinator and then as its interim head coach over three seasons ending in 2015, the Terrapins passed him over in favor of Durkin.

But after one season in Saban’s small army of off-field analysts, Locksley succeeded Kiffin and Sarkisian as offensive coordinator, and shepherded Tagovailoa and his backup, Jalen Hurts, to last season’s national title and this year’s playoff appearance.

Earlier this month, Locksley got the Maryland job after all. In his introductory news conference, he repeatedly thanked Saban for making it possible.

Locksley explained Thursday that Saban’s famed “process,” which insists on almost inhuman consistency and can appear joyless to outsiders, is the perfect tonic for the midcareer coach who may have lost his way.

“The structure that people respect him for, the discipline of his program,” Locksley said. “If you can make it through this program unscathed, per se, you’re leaving with an opportunity to better yourself as a person.”