There’s a scene in the third season of the TV series Succession in which image-obsessed Kendall Roy issues a directive to underling cousin Greg Hirsch.

Kendall: “I might need you to slide the sociopolitical thermometer up the nation’s ass and take a reading, K?”

I’m not certain you’d want to go anywhere near Australia’s ass right now, let alone have any chance of finding a sociopolitical thermometer on the empty shelves at Coles.

But if you could take the nation’s temperature, I reckon it would indicate people are growing pretty tired of hearing from extraordinarily well-paid sportspeople sounding off about COVID and vaccines and the sacrifices they’re making so we can watch them play sport.

With livelihoods and loved ones being lost, with hospitals at bursting point as nurses work 36-hour shifts, with people roaming the streets like zombies searching for rapid antigen tests and booster shots and two-ply toilet paper, with the elderly and disadvantaged fearing how they’ll survive this mess, now seems like the right time for the out-of-touch sportsperson to display humility and grace.

And to shut up. 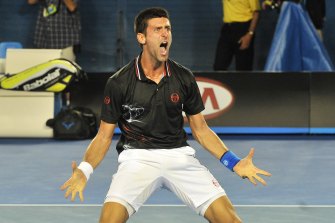 Suggestion: This is the only place the Djoker should be opening his mouth.Credit:Fairfax

Which brings us, of course, to Novak Djokovic, who has been positioned – by himself, his family, and his supporters – as some modern-day Muhammad Ali, oppressed by The System.

Sure, he’s been treated shabbily by the Australian Border Force and politicised by ScoMo, an alleged Sharks fan. The transcript of Djokovic’s interview with bumbling border officials reveals him to be polite and genuinely confused about his visa being cancelled, although I’ve had trickier exchanges getting into half a dozen South American countries on no sleep.

But come on. Come on! He did four days in a dodgy Melbourne hotel. Not four years.

Djokovic has been emboldened by many people, but none more than Tennis Australia boss Craig Tiley, who is less known in tennis circles as a tournament director than a name-dropping fanboy to the world’s leading superstar players each January.

Tiley has done his best to put this disaster back on the federal government (which surprisingly obliged) but it’s clear from the volumes of leaked documents published this week that TA presented a loophole to unvaccinated players to enter this country. That loophole was, perversely, catching COVID-19. Djokovic, the world’s best known anti-vaxxer, jumped right through.

For the past two years, Djokovic has been ramming his pseudoscience jibber-jabber down our throats, ranging from the merits of vaccinations to questioning lockdowns to bizarro claims that he can detoxify water simply by using his mind. (Can you turn it into beer? Asking for a friend).

On December 16, he caught the dreaded virus, got a medical exemption and then blabbed about it on Instagram, setting in train the shitstorm he presently finds himself in.

Sometimes it really does pay to say nothing — or at the very least keep your mobile phone in its holster.

Djokovic has a bigger fanboy than Tiley. His is Nick Kygrios.

Nicky K believes the media are to blame for all this — who else? — while also reminding all concerned about Djokovic’s support during the bushfire appeal two summers ago like it is somehow relevant.

This argument from Kyrgios about himself and other players, dropping the names of foundations and charities they’re involved with, is wearing thin.

Charity doesn’t buy you anything; whether it’s favourable press or free passage at the border. You do something for those less fortunate because it’s the right thing to do, not to trumpet it down the track at a convenient time. 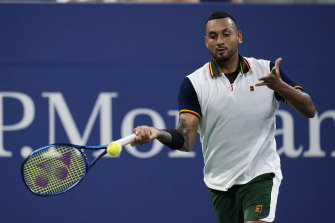 Nick Kyrgios has been an unlikely ally for Djokovic during the deportation saga.Credit:AP

“If this was a normal person, they wouldn’t have to deal with this media side bullshit,” Kyrgios said when Djokovic was detained. “His life is probably hard enough as it is. I know what that’s like.”

He’s right. Normal people couldn’t possibly understand how hard life is for Novak Djokovic, who has an estimated personal wealth of $302 million.

Meanwhile, Bernard Tomic figured this was the right time to play the COVID card while bombing out in Australian Open qualifying.

Of all the inventive ways Tomic has lost matches during his train wreck of a career, this one’s the best.

The inability to read the room isn’t limited to tennis players. Some rugby league players couldn’t read the room with Google Translate.

“I cannot believe nobody’s getting tested,” Tomic fumed at the chair umpire. “They’re allowing players to come on the court with rapid tests in their room. Come on. No official PCR testing.”

Tomic has decided he wants Australia in is his corner from now on.

“I just want the Australian public to get behind me,” he said before his match against Russian Roman Safiullin.

A tip for free, Tank Engine: Australia will rally behind you if you try, regardless of the result. It’s less likely to get around you when you start whinging to the umpire about having COVID while trailing 1-2 in the second set.

The inability to read the room isn’t limited to tennis players. Some rugby league players couldn’t read the room with Google Translate.

The virus is ripping through NRL clubs at an alarming rate while the argument that young, fit and — mostly — double vaccinated footballers won’t suffer the ill-effects of the virus isn’t holding up. I know of several who have been knocked around by it for weeks, not days.

Mostly, though, it’s just forcing players and staff to isolate.

Fearing what this might mean for the competition when it starts in mid-March, the NRL has introduced some rather light restrictions for players, like avoiding high-risk indoor areas such as pubs, nightclubs, restaurants and cinemas. If they do attend these places, they should sit outside if they can.

They’ve also banned public transport and limited visitors to houses to 10 people. There are no restrictions on outdoor activities.

They are also required to get a rapid test, which is provided by the club, every day. My kingdom to find just one under $50.

Imagine it. Having to drink schooners in a beer garden. Or sipping a latte outside a cafe. To keep the comp going. To save your multimillion-dollar contract.

Some players have reacted angrily via social media, wondering why they got vaccinated, while the RLPA wants players to live and work under the same conditions as the rest of the community.

“You’re not going to stop it so we’re going to have to work to live with it and the best way to do that, is to allow now more than ever, players to live under no restrictions other than state requirements,” RLPA boss Clint Newton told News Corp.

From now on, all players can work from home. Just email in that weights session. Ball work? Let’s Zoom it.

And when the season starts, if a squad is decimated by COVID positives or close contacts, just grab a few blokes off the street to satisfy the big, fat broadcast contract that delivers the players enormous salaries each year.

Players keep reminding us about the sacrifices they’ve made in the past two years to keep the competition going.

Let’s examine that for a moment. 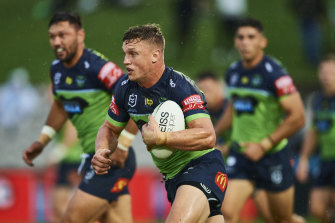 Jack Wighton: “Thought I was getting the stupid vax so I didn’t have to do another year of this.”Credit:Getty

For the past two seasons, players have taken pay cuts, like most areas across the game. This season, though, the NRL is handing back $6m after finishing last year with an unexpected surplus of $50m.

In 2021, players and their families were relocated to Queensland as the Delta strain ripped through NSW. They weren’t sent to a detention hotel like poor old Novak. Rather, resort-style accommodation, with all expenses paid for them and their families. Hardly the Gulag.

“Thought I was getting the stupid vax so I didn’t have to do another year of this shit,” Canberra five-eighth Jack Wighton fumed on social media.

No, you got the stupid vax so you wouldn’t get sick, wouldn’t infect others — and keep your job.

The advice here, for the blissfully unaware sportsperson, whinging about how hard they’re doing it in these uncertain times, is to find one of those sociopolitical thermometers, stick it firmly up the nation’s ass and consider what it’s thinking.

Alternatively, just remove your head from your own. That’ll do it.

“I’d rather people talk about my golf game than my hair.” — Queensland golfer Cameron Smith on his signature mullet. I’m sure they will if he keeps winning PGA Tour events as he did earlier this week, finishing 34 under par and beating world No.1 Jon Rahm in the final round of the Tournament of Champions in Hawaii, picking up $2 million in pocket money.

Give me a thrilling England draw decided on the final ball of a Test match in a so-called dead rubber instead of that Big Bash malarkey any day of the week. The SCG Test was a ripper even with the best part of a day’s play missed because of rain. Perhaps four-day Tests are the future.

Adelaide United’s Josh Cavallo was widely applauded when he came out. But the homophobes can only hold their tongues for so long before they need to be heard, whether it’s on social media or from the stands, as some Melbourne Victory fans did at the weekend when they abused him. Police are investigating.

It’s a big weekend for … the brave souls who will venture to the Magic Millions meeting on the Gold Coast on Saturday, drinking in the humidity as millions of dollars of horseflesh race or go under the auctioneer’s hammer at the sales. Remember: hydration is important.

It’s an even bigger weekend for … Usman Khawaja because you’re only ever as good as your last century. Or, in his case, back-to-back centuries. The fifth Ashes Test at Blundstone Arena, Hobart, starts on Friday. Khawaja has kept his place in the side and will open instead of Marcus Harris.

Oleksandr Usyk will give Anthony Joshua ‘a lot of problems’, Frank Warren predicts