Last season, in certain rugby league clubs in Queensland's south-east, Toowoomba and across Victoria, under-6s players did not tackle each other.

Instead they took their first steps in the sport through Oztag. Teams in age groups up to under 12s did not compete for premiership points, or contest grand finals. 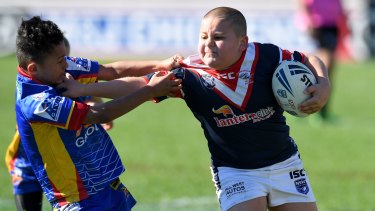 Tackling starts later and finals are out until under 12s but the NRL says the changes must be made to make the game attractive to new players.Credit:NRL Photos

There were even 18-month registration windows to allow for flexibility in finding a suitable age group to match size, maturity and ability. As of the weekend, the sky had not fallen in, nor had the very fabric of the greatest game of all disintegrated before their impressionable young eyes.

You would be forgiven for believing that was the case, given the spike in fierce debate over the past week as juniors across the country return to their training fields to prepare for the season. In Queensland, clubs across the state will be encouraged to roll out the Player Development Framework (PDF, which is the broader term for the suite of changes) in full this season.

Next year, it will be mandatory north of the Tweed, although what happens in NSW remains to be seen. With the merger between the Country Rugby League and the NSWRL taking up resources, the board has yet to make a call on what parts of the PDF it wants to endorse and which may need further discussion.

Some of the concern from former players has been familiar. With under 6s not tackling at all and transitioning to full contact by the end of under 7s, after they undergo a specialised tackling program, the moves have gone to the heart of many things the rugby league fraternity hold so dear; notions of toughness, resilience and physicality from the youngest of age groups.

Former Dragons and Panthers playmaker Jamie Soward was one to express his concerns via social media. He said he had an open mind about some of the moves, which the NRL say are a must to boost participation and compete with rival codes, but it was there the alarm bells started to ring.

"For me, it’s the competitive side of things, not playing for anything at the end of the year. That was always been part of the appeal of team sport, that camaraderie and the friends that you make and being able to say you played in a grand final," Soward said. "Grand finals are few and far between. Some teams stay together, that’s their team, and they win six competitions. Other teams … I only won one under the age of 13 and I didn’t know if I’d ever get back to one.

"The other alarming thing was the no tackling. We have something unique here that nobody in the world is doing, the full contact at that age. If kids aren’t fully developed to be able to play rugby league, there are options (touch, oz-tag) out there to be able to go and learn your skills and then come into an environment where you are going to be able to tackle."

The NRL has been on a blitz during the week to explain the motives for the moves. It became a discussion point when Gold Coast Titans player Nathan Peats tweeted a Facebook post about the changes and expressed his frustrations.

"I think people are passionate about our game and the game succeeding. This is different. I think what is important is that people try to understand that the changes are setting the game up for growth," said Luke Ellis, the NRL's head of participation, pathways and game development.

"People are passionate about all aspects of rugby league. We really need to convince people that we are changing for growth, we are changing to a world where we get more participants through the front door when they are six, we hold them for longer and we have a broader participation base. That’s beneficial for the game."

Ellis has been doing his utmost to explain the motives, selling the vision to not only those with public profiles but families and kids that might be interested in taking up the game.

"What we need to do is explain the benefits are and dispel some of the misconceptions," Ellis said. "The debate around competition is a really interesting one. The NRL is not getting rid of winning and losing, the NRL is not saying we should remove the scoreboard.

"What we are saying is that we want our participants to compete every week and not always basing that on what those young players can contribute to a premiership. We want everyone to get a fair run week to week.

"When it comes to tackling, there is a lot of debate around how important it is for kids to learn how to tackle early. But we have kids come in at all levels of the game and every age group, regardless of what age group that is.

"What we are doing is saying at that very basic, entry level to the sport, we want to be as attractive to as many participants as possible. We understand that tackling is a barrier to entry. If we can demonstrate to people that what we do is safe and inclusive and our coaches are well-trained, they are going to stick around longer."

But those in the junior clubs and the families of young players weren't always on the same page, with a 'disconnect' especially evident around the development competitions (no competition points, grand finals), with just 16 per cent of clubs saying it improved the playing experience.

"A disconnect exists between Club hierarchy and the participant experience," the report said. "This disconnect is most evident in the Development Competition intervention and the Club view of the overall effectiveness of the PDF.

"This anomaly presents an opportunity to establish a program that better informs the Club volunteers on the overall objectives of the PDF and it’s perceived efficacy when viewed through the participant's experience."

NSWRL chief executive David Trodden will be a keen observer of how the changes perform across the other states this season, with the league still to take a deep-dive into the pros and cons despite being presented with the QRL's feedback last November.

"The board is across that. I guess they feel it’s one thing reviewing a report and another making a final decision on the basis of a report without consulting stakeholders."

That's not to say NSW stands to be an outlier to the changes, which won't be seen on fields in the state until at least next season. Trodden believes a uniform approach is a must but what that looks like may not be set in stone.

Islanders proving to Sidney Crosby and Penguins that they belong