Home » Sport » On a dazzling night, the African runner lapped three times was the true star

Birmingham: The problem with a night at the track and field is you don’t know where to look. Your eyes can’t keep up.

Most of the eyeballs at Alexander Stadium on Wednesday focused on the men’s and women’s 100m, the blue riband events at any meet and especially here, at a venue jammed with loud and raucous locals filling every available seat. 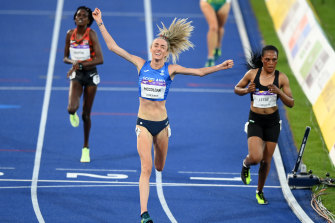 The night was lit up with camera flashes as former Kenyan rugby player Ferdinand Omanyala won the men’s. There was just as many when Jamaica’s Elaine Thompson-Herah smoked the field in the women’s before calmly brushing the hair from her face and leaving the track like it was a training run.

There were other sights, too, and perhaps none were more dramatic than Scotland’s Eilish McColgan in the women’s 10,000m final when she pulled away from Kenyans Irene Cheptai and Sheila Kiprotich in the final 30 metres, her face as wrought with anguish and ecstasy as you’d expect after 25 laps over 30 excruciating minutes.

As she did so, I doubt anyone was looking at Mathakane Letsie, the 30-year-old from the tiny landlocked African nation of Lesotho, who crossed the finish line a metre behind McColgan.

The problem for her was she had three laps to go. 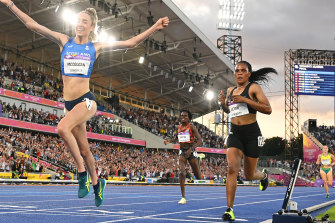 Letsie (right) ran a personal best time in Birmingham – and that’s what it’s all about.Credit:Getty

Letsie was still running after McColgan draped the Scottish flag around her shoulders and did her post-race interviews with a long line of broadcasters.

She was still running as McColgan raced over to the stands and embraced her mother, Liz, who won this same event at the Commonwealth Games in Edinburgh in 1986 and Auckland in 1990.

Eventually, she finished six minutes after McColgan yet received roaring support from the crowd in further evidence these are truly the “Friendly Games”.

After crossing the line, Letsie walked directly towards the main grandstand, grabbed a drink of water and made her way through the media mixed zone where rival competitors were speaking to reporters from their respective countries. 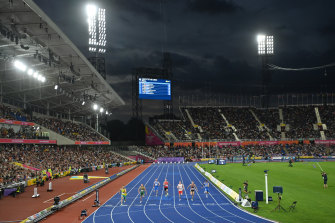 It was a night to remember at the Alexander Stadium on Wednesday.Credit:Getty

When I grabbed her attention, she was stunned that someone wanted to speak to her.

Why wouldn’t we? She’s the humanity we’re supposed to see in sport. She’d also run a personal best time.

As McColgan took on the Kenyans, Letsie was a distant last behind the rest of the field. It didn’t take long for the fans to realise, trying to lift her with every stride.

She was lapped in the 11th, 18th and 25th minutes as the field strung out, forcing the men’s high jumpers — including Australia’s Brandon Starc, who claimed silver after winning gold four years ago — to wait to compete.

Earlier, Australia’s Rohan Browning continued his good form from the heats, becoming the first Australian in 12 years to make the final of the men’s 100m with a commanding run in the semi-final.

When it came time for the final, the men took their place behind the blocks as a heartbeat played through the loudspeakers.

Silence fell over the arena before a spectator couldn’t help himself. “COME ON ENGLAND!” he bellowed repeatedly before someone managed to shut him up. 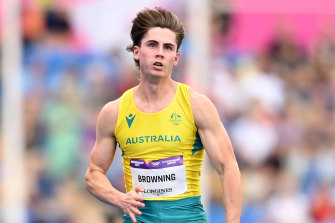 Rohan Browning was sixth in the men’s 100m final.Credit:Getty Images

South African Akani Simbine, who had gone into the race as his main threat, saw a silver lining in his silver medal: “Ferdinand’s win is good for Africa.”

As for Thompson-Herah, there was a belief before the race that England’s Daryll Neita could beat her after breezing through her semi-final.

As it transpired, Thompson-Herah had kept her powder dry as she won her first 100m Commonwealth Games medal.

“I am grateful,” she said. “I had a better execution. I am happy to get my first title. I came fourth in the 200m four years ago, and so to move up to a gold, I’m super excited for that.”

Her sights are now set on the women’s 200m, although the race, disappointingly, won’t include countrywomen Shelly-Ann Fraser-Pryce and Shericka Jackson, both of whom have skipped the meet.

Some believe their absence erodes the relevance of the Commonwealth Games, and in some respects they are right.

Try telling that though to McColgan, who cried tears as the Scottish national anthem was played.

Try telling Letsie, who on Monday returns home to her children.

There will be plenty of farewells and sign-offs at these Games but none will be felt more keenly among athletes – and reporters – than that of legendary media man Ian “Hanso” Hanson.

For decades, there has been no safer pair of hands for sports than Hanson, who has notched up an astonishing nine Olympics and 10 Commonwealth Games, along with countless elite swimming meets, surf carnivals and everything in between.

If he had a dollar for every time a clueless reporter was told to simply “Ring Hanso”, he’d have the bank balance of Elon Musk.

If you see him at his beloved Currumbin Beach Surf Club, which you will, buy the man a beer.

“Members hope all the Triathlon Australia staff are enjoying the expensive trip to Birmingham, while athletes are told funding is low for athletes travel to races in 2022. Is the new CEO enjoying his first major games junket?” — Australian triathlon legend Emma Carney on Twitter. Toot! Toot! The Gravy Train will be departing from platform three in …

It may have taken five days, but sure enough some Australian supporter had to shout out “Aussie! Aussie! Aussie! Oi! Oi! Oi!” Unless it was out of respect to Black Sabbath frontman and Brummie local Ozzy Osbourne, may we never hear this godforsaken utterance ever again. Thank you.

Get all the latest news from the Birmingham Commonwealth Games here. We’ll be live blogging the action from 4pm-10am daily.

Premier League new kits 2020/21 what has been leaked, when are they released and will they be worn this season? – The Sun