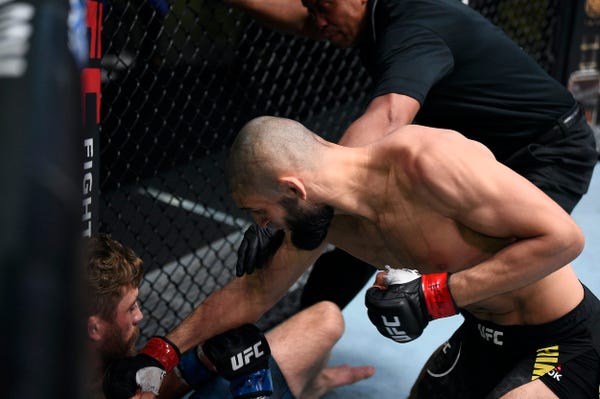 One of the UFC's scariest new athletes finished his opponent in 17 seconds with a merciless one-punch knockout at a behind-closed-doors event in Las Vegas.

Khamzat Chimaev introduced himself to the UFC with two emphatic wins in as many weeks during the company's debut residency on "Fight Island," Abu Dhabi, in July.

The Chechen fighter, who is campaigning in the welterweight and middleweight divisions simultaneously, returned to the Octagon against Gerald Meerschaert on Saturday.

But despite the step-up in opposition, Chimaev had his easiest time yet, demolishing Meerschaert without taking a single punch in return.

Chimaev displayed fight-ending power by flooring Meerschaert early, forcing the referee to wave the bout off as the Sweden-based Russian was about to settle into a frenetic ground-and-pound.

After the win, Chimaev could be heard calling for a performance-related bonus. "I hope [the UFC president] Dana White's gonna give me $50 g's."

Tyrone vs Donegal will go down to the wire, says Peter Canavan