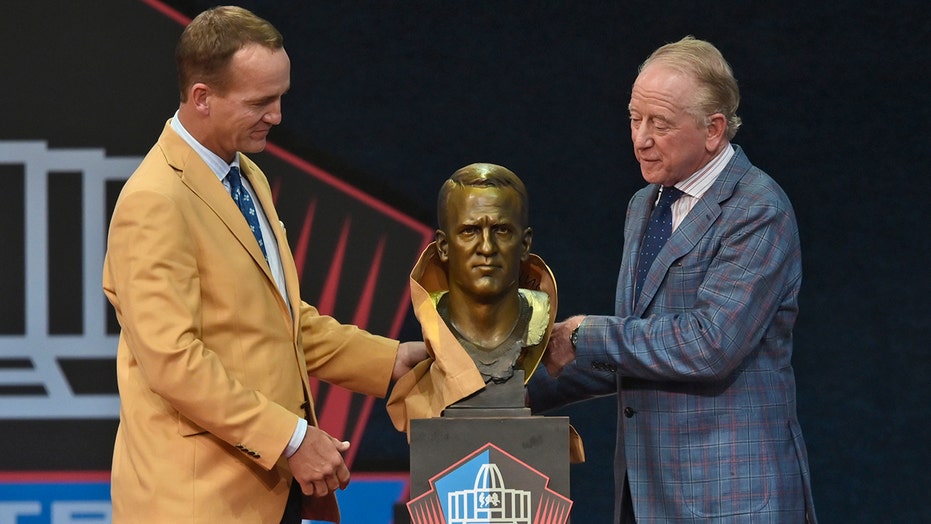 Peyton’s Place is now in Canton at the Pro Football Hall of Fame.

The only five-time NFL MVP and a two-time Super Bowl winner who left the game five years ago with a slew of passing records was enshrined Sunday night with other members of the class of 2021. The stadium rocked with cheers from fans in Colts blue or Broncos orange — the two franchises he took to the top — when Manning was introduced.

The man who could spend seemingly endless moments changing plays at the line then jabbed at the time limits set by the hall because of 19 acceptance speeches this weekend. The 2020 class and a special centennial class had their enshrinements delayed a year by the COVID-19 pandemic.

“The 2021 induction class wants to thank those previous inductees who gave long-winded acceptance speeches,” said Manning, who was presented by his father, Archie, himself a College Football Hall of Fame member. “Forcing us to have a whopping six minutes to recap our football careers. I want to give a special thanks to my old rival Ray Lewis for being here tonight. Ray just finished giving his speech that he started in 2018.”

Joining Manning in this year’s class were two other first-time eligibles, defensive back Charles Woodson — who beat out Manning for the 1997 Heisman Trophy — and receiver Calvin Johnson. Also in the class were safety John Lynch, a seven-time finalist before getting in; guard Alan Faneca, a premier blocker for 13 seasons, winning a Super Bowl with Pittsburgh and making six All-Pro teams; coach Tom Flores, who led the Raiders to two titles; Cowboys wideout Drew Pearson, a 1970s NFL All-Decade player; and Steelers super scout Bill Nunn.

Pearson, of course, caught Roger Staubach’s winning touchdown pass in a 1975 playoff game at Minnesota that is considered the original Hail Mary. But he should be recognized for 557 catches, including postseason, for nearly 9,000 yards and 56 touchdowns.

“It’s not about how long it takes to get here,” Pearson said, “but more about how you wait. My wait was supported by my faith.”

The late Nunn was among America’s most prominent Black sports journalists before going to work for the Steelers and mining the historically Black colleges for talent. He was as much a contributor to the Pittsburgh dynasty as the players he discovered, which included Hall of Famers John Stallworth, Mel Blount and Donnie Shell.

When is Chelsea vs Man City rescheduled date and why has game been postponed? – The Sun