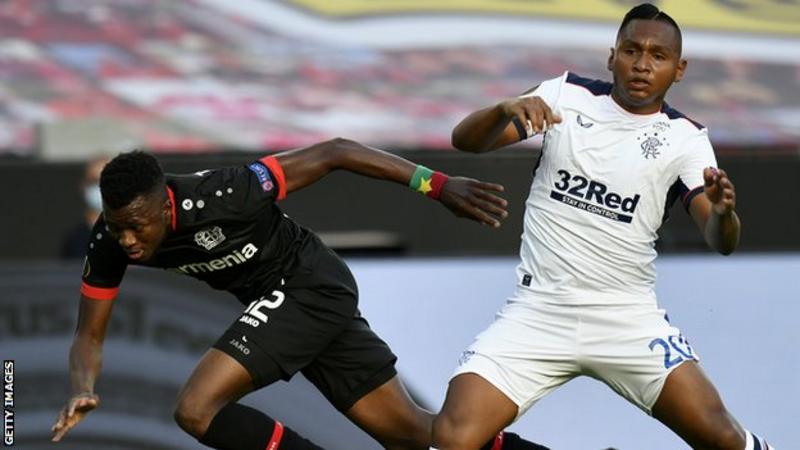 There is “no denying” Rangers striker Alfredo Morelos has been distracted by speculation over his future, says manager Steven Gerrard.

The Colombian made little impression in his side’s 1-0 defeat by Bayer Leverkusen on Thursday, as the Ibrox side’s Europa League campaign ended.

Morelos, 24, has been subject of interest from French side Lille, with reports of an £18m offer.

“Everyone knows he’s had his head turned,” said Gerrard on BT Sport.

“If a bid comes that the board like, and if the player tells me face-to-face he wants to go, we’ll see what happens.

“My focus is on the team and the players that want to be here.”

Gerrard was speaking after defeat in Germany consigned Rangers to a 4-1 aggregate loss in the Europa League last 16.

Despite the result, the manager expressed pride in his players, following a campaign in which they reached the last-16 of European competition for the first time since 2011.

“The run’s been amazing. The players have been fantastic, they’ve gave me everything they’ve got,” Gerrard added.

“It’s an amazing achievement to get to where we got to, but we’re Rangers and we need to keep striving for more and to get better individually.

“There’s a lot we can improve on and a lot we can work on moving forward, and tonight we’ve found a level to strive for. Hopefully one day we can get to that level.”

Match of the Day: Conor McNamara on most memorable commentary moments