Roger Federer had to hold back the tears as Laver Cup defeat alongside Rafael Nadal brought his illustrious career to an end but the 20-time Grand Slam winner insisted he was not sad.

The 20-time grand-slam champion announced last week he would bow out from competitive tennis with one final match at the Ryder Cup-style competition which was his brainchild.

London was the destination for the fifth edition of the Laver Cup, the city for some of Federer’s greatest triumphs, but the Swiss superstar could not add one more victory to his illustrious CV.

Team World duo Jack Sock and Frances Tiafoe proved the pantomime villains with a 4-6 7-6 (2) 11-9 victory at the 02 but it was still a celebration for the 41-year-old.

Federer enjoyed a lengthy hug with old sparring partner Nadal at the conclusion of the match before he was given one final standing ovation by a sold-out crowd despite the clock being well beyond midnight.

‘We’ll get through this somehow,’ Federer said on-court. 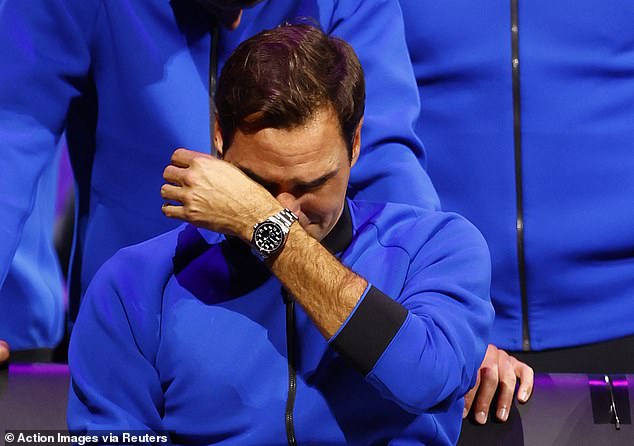 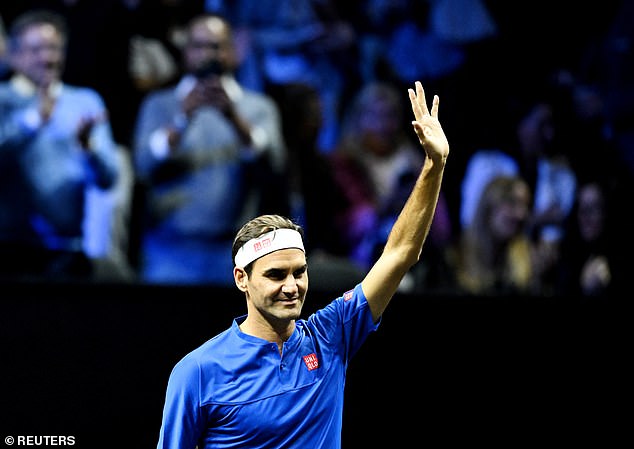 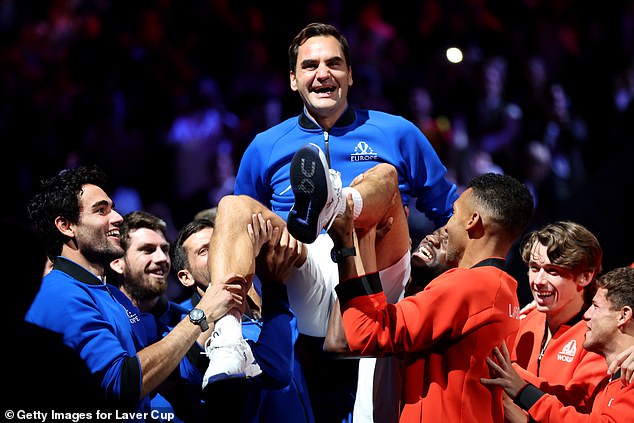 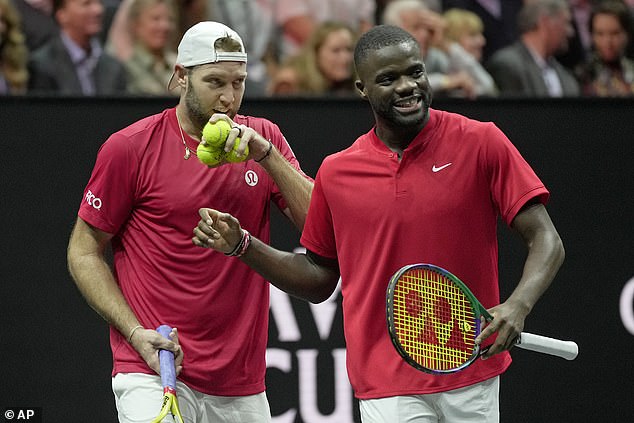 ‘Look, it has been a wonderful day. I told the guys I’m happy, I’m not sad. It feels great to be here and I enjoyed tying my shoes one more time.

‘Everything was the last time. Funny enough with all the matches, being with the guys and having family and friends, I didn’t feel the stress so much even if I felt something would go during the match. I am so glad I made it through and the match was great. I couldn’t be happier.

‘Of course playing with Rafa on the same team, having all the guys here, the legends, Rocket (Rod Laver), Stefan Edberg, thank you. 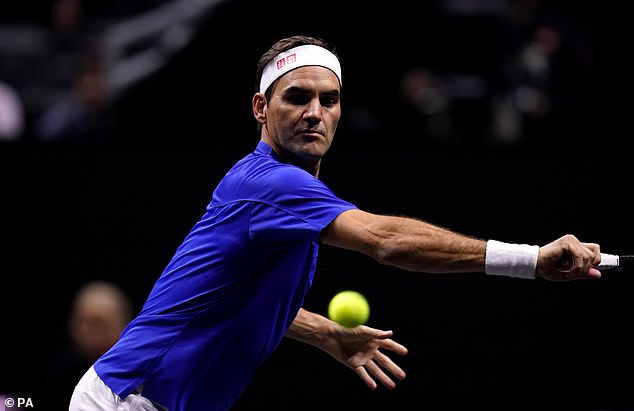 Despite his tears, Federer insisted that he was happy, not sad, to be retiring from tennis 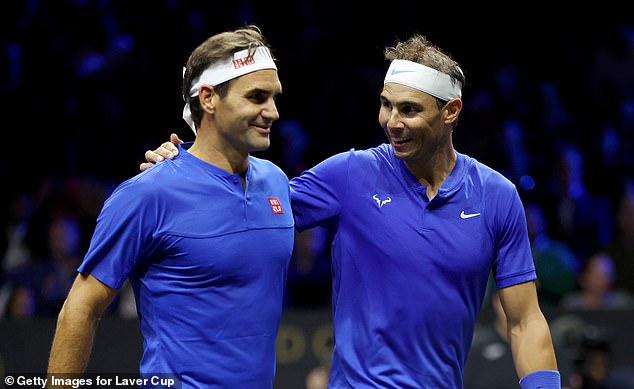 Federer expressed his delight at having played alongside Rafael Nadal (right)

‘It does feel like a celebration to me. I wanted to feel like this at the end and it is exactly what I hoped for so thank you.

Federer had to fight back the tears before he thanked wife Mirka, who has watched him battle through a succession of knee operations before he finally admitted defeat in his pursuit to come back last week.

He added: ‘Thank you everybody. I’ve had so many people cheer me on and you guys here tonight mean the world.

‘My wife has been so supportive… she could have stopped me a long, long time ago but she didn’t. She kept me going and allowed me to play so thank you. She is amazing.’

Even Federer’s playing partner and old rival Nadal struggled to keep his emotions at bay as he was also spotted in tears alongside the Swiss star following the match.

Following Federer’s announcement last week, the Spaniard saluted his long-time rival and said news of his retirement is ‘a sad day for me personally and for sports around the world’.

Nadal, a 22-time Grand Slam champion, has enjoyed numerous duels with Federer over the years, with thrilling finals and agonizing defeats at the hands of the Swiss.

Along with Novak Djokovic they have proven a dominant ‘Big Three’ in men’s tennis and news of Federer’s retirement led to Nadal penning an emotional tribute. 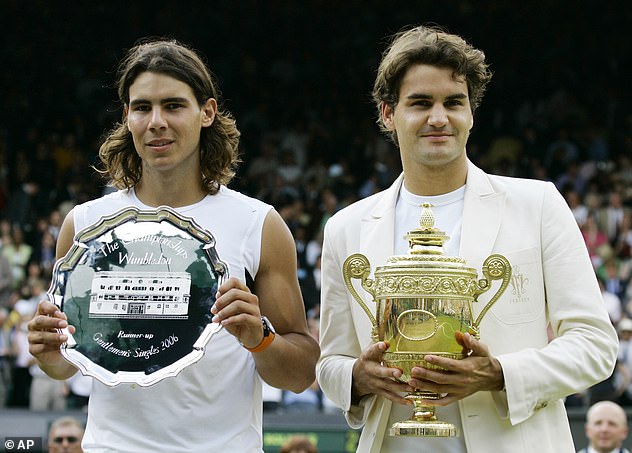 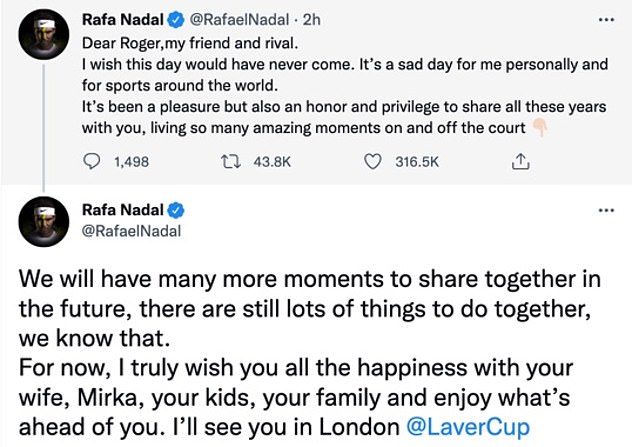 Writing on Twitter, Nadal described it as a ‘sad day’ for him and the rest of sporting world

‘Dear Roger, my friend and rival. I wish this day would have never come,’ he tweeted. ‘It’s a sad day for me personally and for sports around the world.

‘It’s been a pleasure but also an honor and privilege to share all these years with you, living so many amazing moments on and off the court.

‘We will have many more moments to share together in the future, there are still lots of things to do together, we know that.

‘For now, I truly wish you all the happiness with your wife, Mirka, your kids, your family and enjoy what’s ahead of you. I’ll see you in London.’