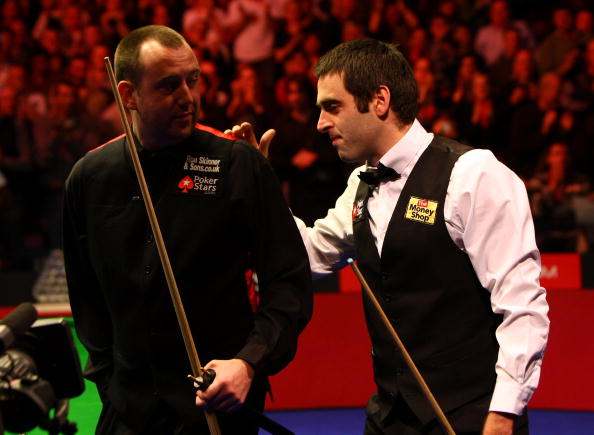 Ronnie O’Sullivan and Mark Williams renew their epic rivalry on Saturday in the semi-finals of the Welsh Open, a history which dates back over 30 years to when the two all-time greats were battling it out as juniors.

The two men have been part of snooker’s elite for nearly three decades and they have been battling it out for even longer than that as they learned the ropes in the immensely tough amateur and junior scene of the late 1980s.

Neither man can remember the exact first time they met or played, but O’Sullivan is placing a memory of the Welshman as far back as just his twelfth year.

‘I remember we had a really good game once at a Pro-am at Upton Park, that was a local one for me, but Mark travelled down from Wales,’ O’Sullivan told Eurosport.

It is an incredible achievement from both men that they are still at the top of the sport into their mid-forties and still battling it out as they were before they were even teenagers.

Williams said: ‘I’ve been locking horns with Ronnie since I was 12 or 13 years old, playing in the juniors together, before the likes of John Higgins came along.

‘I’m 46 next month and he’s 45 and we’re still locking horns. Its incredible really.

‘Obviously I’d love to win, but the occasion…who would have thought, 25, 26 years as a professional that I’d be playing him in the semi-final of a ranking tournament, it’s crazy really, but something I’m looking forward to.

‘I remember in all the Pro-Ams I used to go to at 13, 14, all over the country, he was unbelievable then, you know. There was a lot of youngsters then, before the likes of John Higgins come there was Jonathan Saunders, Chris Scanlon all them.

‘The amateur scene was just frightening it was so good. If I won one match I’d be lucky, I was getting beat all the time. Them hammerings, I kept going and that’s really why I’m here today, going back on the Saturday, get hammered again, go again Sunday. Same as Ronnie was doing, but he was winning a lot more games than me, but that’s where you learn your craft.

‘All of a sudden after a year, or whatever, of hammerings, then I was losing 3-2, then I was beating the odd one, then I’d beat more and it puts you in good stead for when you turn pro.’

Williams feels this is a grounding in the game that young players just don’t get to enjoy these days, thanks to the lack of amateur game and the flat draws that welcome them when they turn pro.

‘They’re not learning their craft these days,’ he said. ‘Get through Q School, into a flat draw, top player every time, get hammered and get the confidence ripped out of them and I think that’s the reason the young ones aren’t coming through.

‘We used to go to Blackpool for months on end, play amongst ourselves before we come to the top boys, so by then you’d earned a couple of quid and were confident.

Williams and O’Sullivan may not have the closest relationship, but having been competing for such a long time, the respect is unquestionable.

‘We’re not the best of mates,’ said Mark of Ronnie. ‘We don’t go out drinking or nothing, but I’ve got the utmost respect for him.

‘I’ve known him and played against him since 13 years of age, I’m 46 in three weeks, it’s 33 years, I’ve only known missus 20. Nothing but respect and admiration for him.

‘I know how hard it is for myself to keep going and he’s  on a different level to me so it must be even harder for him and his dedication to keep going.’

Ronnie added: ‘I’m happy just to be playing. I think I’m a bit like Mark, we enjoy it we appreciate that we’re still able to compete and it’s nice to be out there playing on good tables, good events and still competing.’

The two legends played in the World Championship quarter-final just last year as the Rocket went on to lift the trophy for the sixth time.

Williams was happy to joke about the match, as ever, insisting that he expects to lose to Ronnie again on Saturday.

‘I was in control first session. If it had carried on I’d probably have won really comfortable but obviously another day is a different thing, he played well to come back and he does what he does – beat me all the time,’ said Mark.

On being confident going into the semi-final, Williams added: ‘Yeah, I’m confident of him beating me again.’