Serena Williams has come a historically long way since she made her WTA Tour debut at age 14. She has won 23 Grand Slam singles titles and 50 other tour titles; occupied the No. 1 ranking for 319 weeks; and become one of the cultural touchstones of her time and one of the greatest athletes of any time.

There is, at this advanced stage, much to celebrate in her singular journey. But her 1,000th career singles match, played on Wednesday on a breezy afternoon at the Italian Open, was an often-frustrating reminder of just how far she has to go to resume winning the game’s biggest prizes, against the odds, at age 39.

Seeded and ranked eighth, Williams has turned into a part-time tennis pro. She makes intermittent appearances on the circuit while her younger rivals continue to grind away and improve day by day and round by round, even in the midst of a pandemic.

Wednesday’s loss in Rome against Nadia Podoroska was Williams’s first match in nearly three months. Her desire has not dimmed, as her shrieks, grunts and clenched fists made clear. But her power to intimidate has diminished, and though Podoroska had never faced Williams, she stared down the challenge to win, 7-6 (6), 7-5, in the round of 32.

“It’s an honor to play against her,” Podoroska said. “I saw her playing since I was a child.”

She missed Williams’s first match on tour, however. Podoroska, an unseeded 24-year-old Argentine, was not yet born when Williams played in the qualifying tournament in Quebec City, Canada, on Oct. 28, 1995, losing to another American teenager, Annie Miller.

“I didn’t play like I meant to play,” Williams said then.

More than 25 years later, the same sentiment surfaced in Rome, one of Williams’s favorite cities. Her signature shot — her fearsome first serve — failed her repeatedly. She put only 48 percent of her first serves in play, forcing the issue under pressure and casting increasingly exasperated looks at her coach, Patrick Mouratoglou, and her husband, Alexis Ohanian, in the nearly empty stands on center court.

Even when Williams did make a first serve, she won just 62 percent of the points — an ominously low figure for her and a tribute to Podoroska’s solid returns and remarkable defensive skills on clay.

“It was definitely kind of good to go the distance and try to be out there, but clearly I can do legions better,” Williams said.

Podoroska grew up playing on clay in Argentina, and it showed as she slid expertly into groundstrokes and changed direction quickly. She understands how to construct points on clay, and her kick serve and heavy topspin forehand are well suited to the game’s grittiest surface, as she proved last year with a surprise run to the semifinals at the French Open.

“Of course, that helps me,” Podoroska said of that breakthrough. “I feel a lot of confidence playing on clay courts.”

But Williams, in her prime, overwhelmed many a clay-court specialist, breaching defenses with full-cut forehands off short returns and juicy second serves. She could not get the timing or formula quite right on Wednesday, even if Podoroska dropped hints that she might not be ready to beat the best women’s player of the 21st century.

Podoroska served for the first set at 5-4 and was broken. She then lost a 6-3 lead in the tiebreaker as Williams saved three set points, but at 6-6, Williams steered an edgy, off-balance forehand just wide down the line. Podoroska closed out the set with a good serve and a forehand winner.

In the second set, Podoroska served for the match at 5-3 and was broken at love, making three unforced errors. Williams then held at love to 5-5. Those who have followed her know what this sort of scenario typically means: a ferocious fight back to a three-set victory. 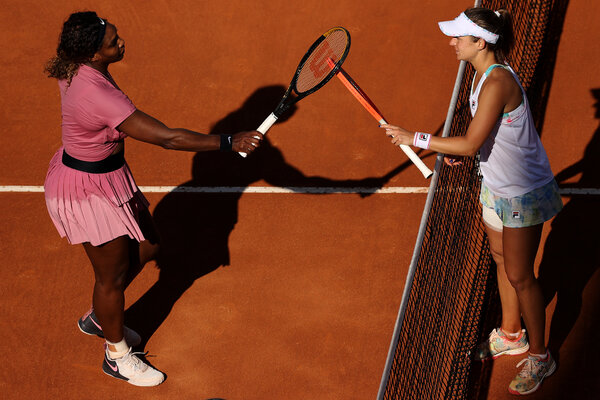 But these are different days. Podoroska won a great scrambling point with a backhand reflex volley and went on to hold serve. With Williams serving to stay in the match, Podoroska hit a bold and precise forehand inside-out winner from deep to go up by 0-30. Williams lost the next two points with glaring errors: an ill-judged low forehand swing volley and a tentative forehand unforced error.

How often has Williams been broken at love in the final game of a match?

“I’ve been training for months, but it feels different on clay to make that last adjustment,” she said. “Finding the rhythm, even sliding and confidence with that, with movement, and just not wanting to break my ankle when I moved. That’s always like a little struggle in the first two matches, and then I’m raring to go.”

The trouble is, she played only one match in Rome. A bigger problem is that there are so many hungry young players full of talent and dreams who no longer wilt in the face of Williams’s power and presence.

She last competed in February, losing to a 23-year-old Naomi Osaka in a semifinal of the Australian Open, another match in which Williams’s first-serve percentage dipped precipitously.

She had expected to play more on hardcourts in March. But the BNP Paribas Open in Indian Wells, Calif., was postponed, and she withdrew from the Miami Open, citing unplanned dental surgery.

“Maybe I do need a few more matches,” Williams said. “I’m going to try and figure that out with my team and my coach and see what we would like to do.”

Her next move is probably accepting a wild card into the WTA event in Parma, Italy, next week, which would give her more competition before the French Open, which begins May 30 in Paris. For now, she has played just three tournaments in the past eight months.

That might have been enough at one stage, given the gap between Williams and the field. But the gap is gone, and a busier tennis schedule is essential if she is truly committed to playing (and winning) into her 40s. It took her less than two years to get from 800 career singles matches to 900. It took nearly five years to get from 900 to 1,000.

Her 851-149 career record remains a work of art, but nothing in sports is eternal, even in Rome, the Eternal City.

Cristiano Ronaldo v Lionel Messi: Barca star comes out on top in head-to-head battles with his rival for GOAT tag – The Sun