SHAUN ROONEY headed himself into St Johnstone folklore at Hampden to win a Cup Double for Saints by beating Hibs.

The result rounds off a magnificent season for the Perth Saints, having secured a top five finish in the Premiership alongside the two pieces of silverware. 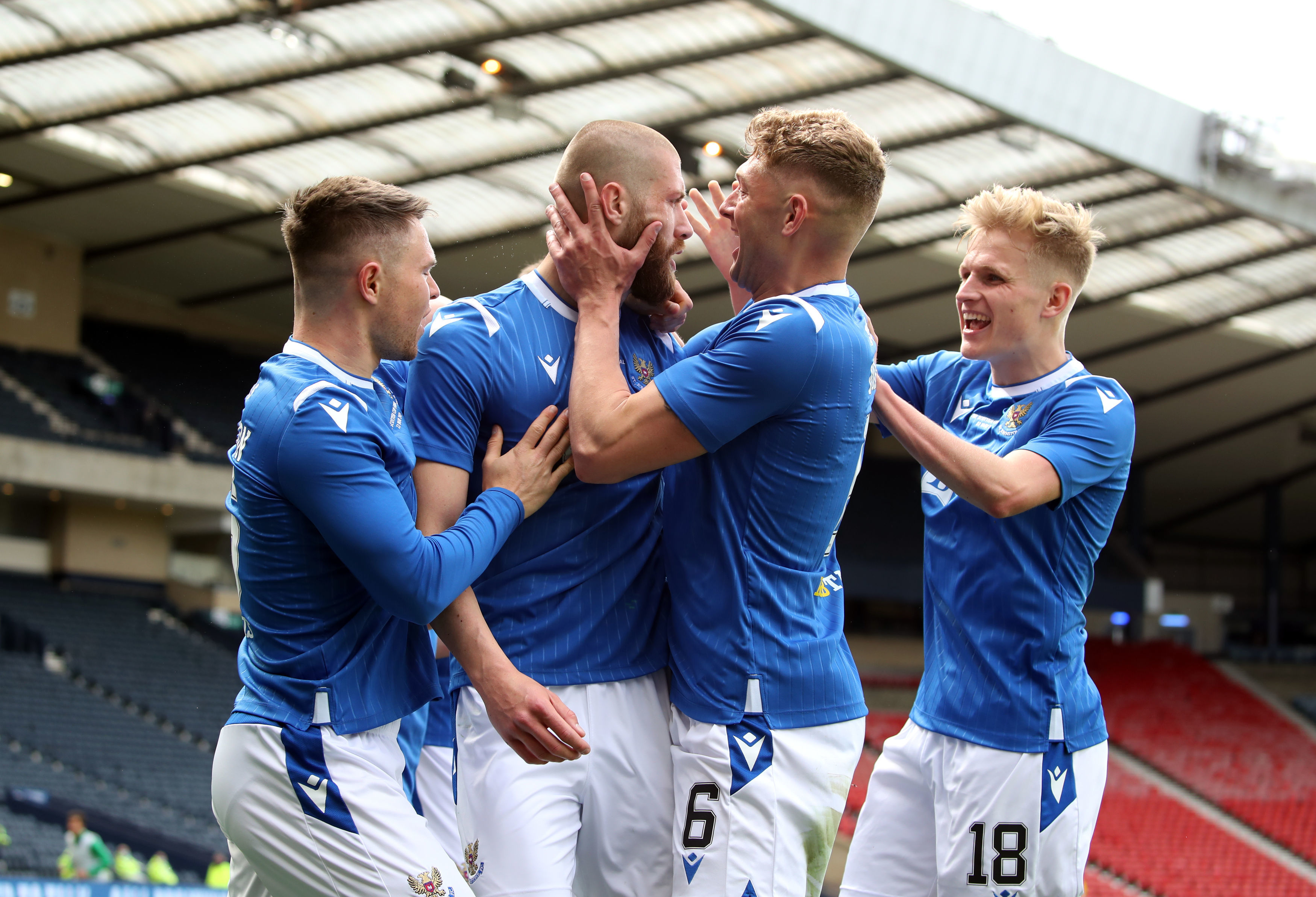 Callum Davidson made a raft changes to the XI he fielded against Livingston for the last game of the season.

Zander Clark was between the sticks and Chris Kane returned up top as did Rooney at right wing-back, while stalwarts Liam Craig and Murray Davidson dropped out to make way for Craig Bryson and Ali McCann.

Pacy attacking Glen Middleton, hero in the semi-final, also came back into the side as well as defender Liam Gordon.

Hibs gaffer Jack Ross had given plenty of players a rest last weekend too, including the terrific trio of Martin Boyle, Chrisitan Doidge and Kevin Nisbet. 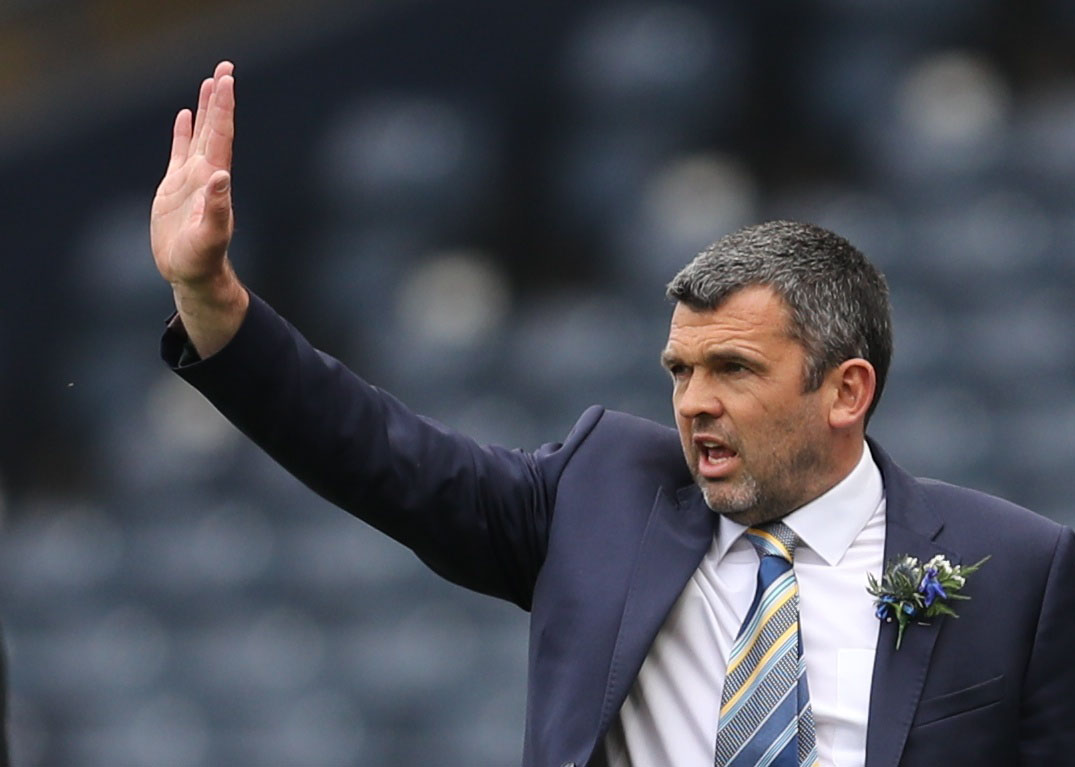 Kane had the first chance of the game after nine minutes when Bryson poked a bouncing pass through the Hibs defence.

The Saints forward quickly pulled the trigger and shot over the bar, despite perhaps having ample time to take a touch. Put it down to those final nerves.

St Johnstone threatened again on 16 minutes through the speedy Middleton. 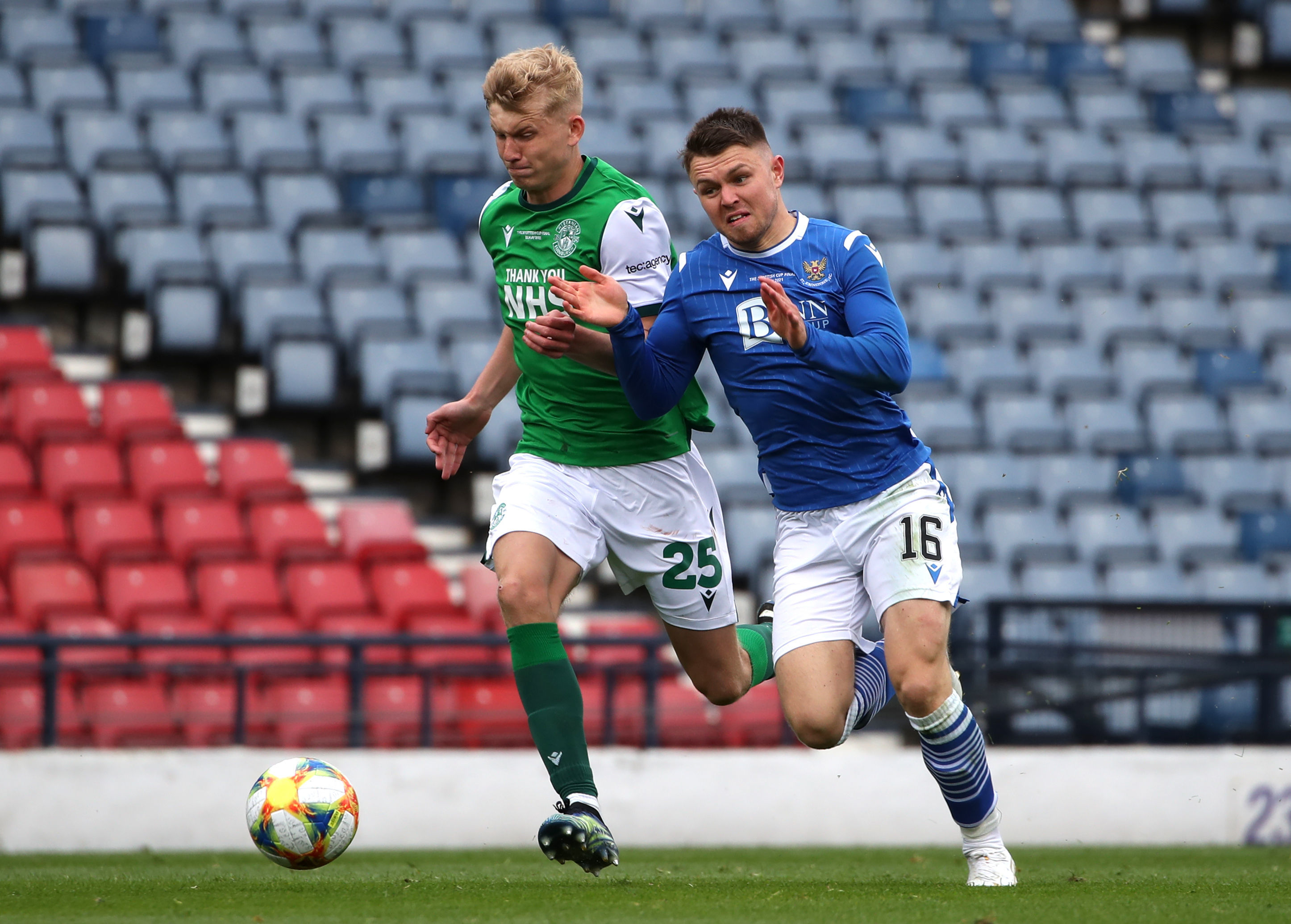 The on-loan Rangers winger dribbled into the box but was denied by a lunging Alex Gogic just when the danger really looked on.

The Leith side had their first crack at Clark ten minutes later when Joe Newell shifted the ball wide to Irvine, who in turn had found space in behind Rooney.

The Aussie aimed a shot at the far post but Clark stuck a leg out to block it brilliantly.

And then just after the half hour mark came Rooney's opener. 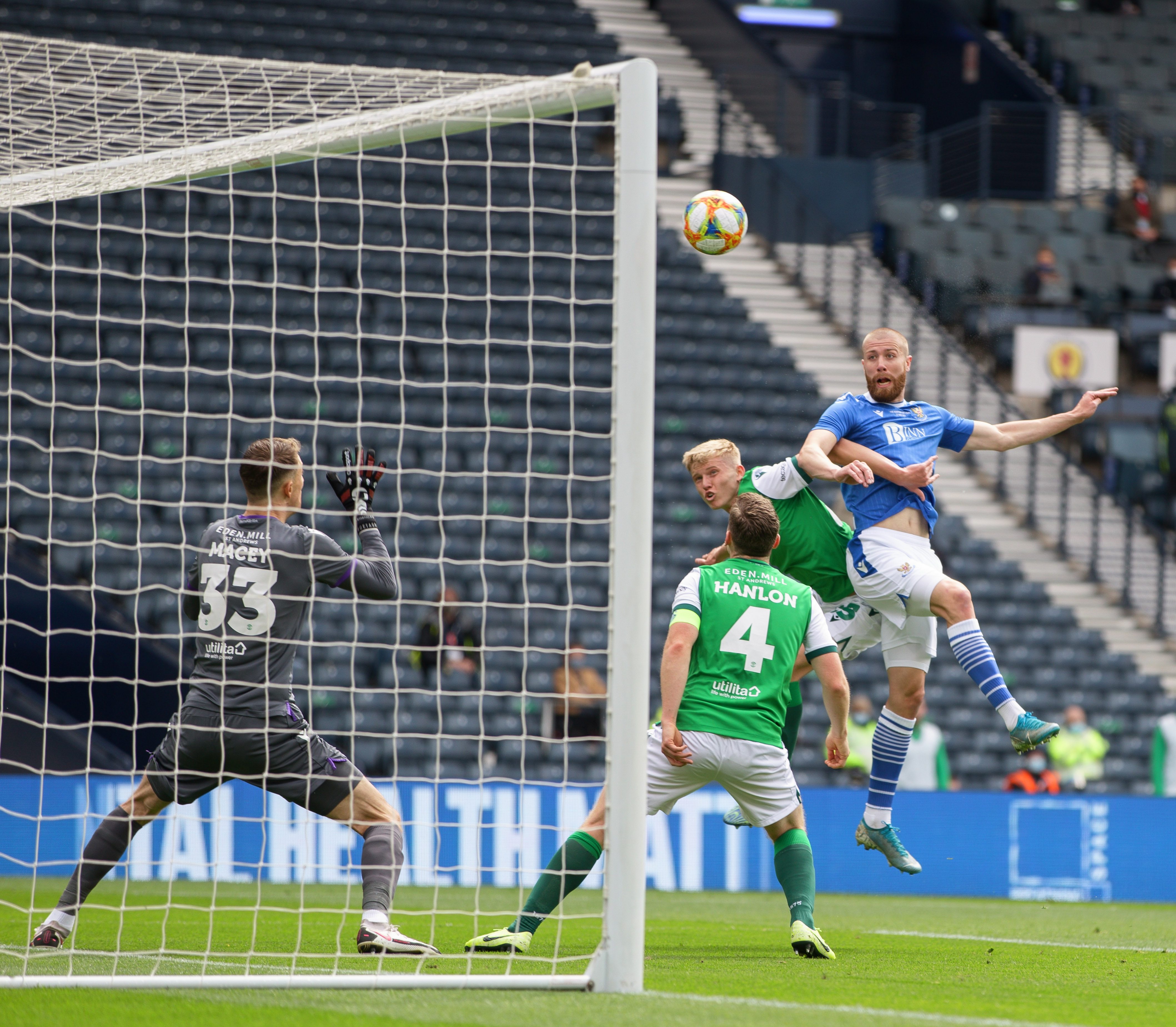 It was a classic header from the rampant full-back.

And maybe it was filled with extra bite having missed out on a Scotland Euros call.

He timed his run to perfection to leap onto the end of David Wotherspoon's cross and quite simply dominated Doig in the air and steered a solid header past Macey.

Hibs went close a couple of minutes later when Newell burst through the middle of the Saints defence and fired at goal – but his effort was always rising and it cleared Clark's crossbar. 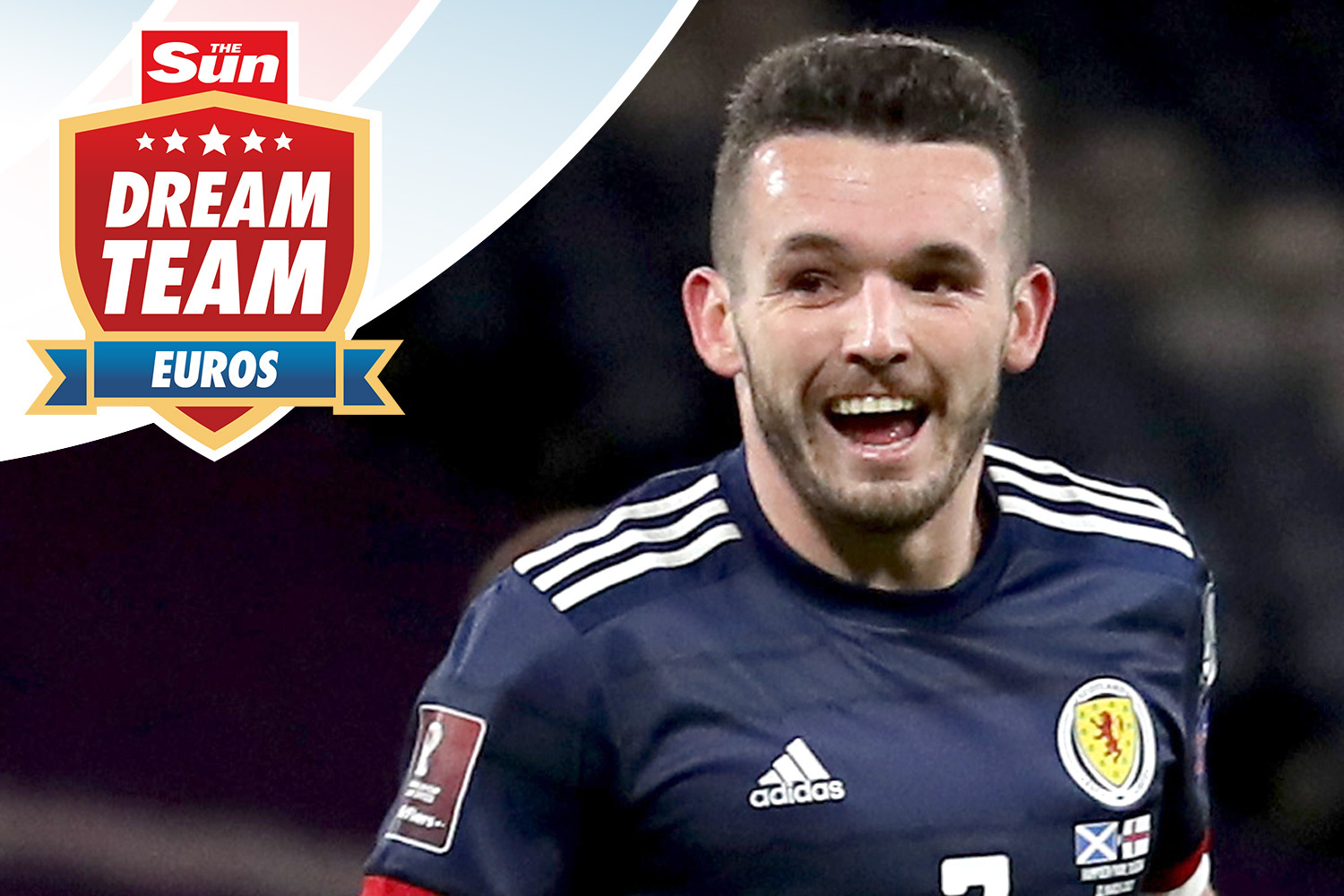 That was about it for pure sights of goal until the half-time whistle.

Within the first five minutes of the restart, we had drama at Hampden.

First, there were claims for a Hibs penalty after a free-kick caused chaos in the box when Jamie McCart blocked a close-range header – those in green were convinced the defender did so with his arm but replays showed it hit his knee.

Whistler Nick Walsh wasn't having it and the Saints subsequently drove right up the other end through Middleton.

Newell managed to hold the winger up and then somehow got his body in the way of Rooney's follow up to deflect a shot wide.

Just as the teams started rolling the substitutes on and the game's tempo died down slightly, the Perth Saints found themselves taring a two-goal lead straight in the face.

A fortunate deflection found its way to Kane who raced into the box but as he went to shoot he was bowled over by McGinn and Walsh pointed to the spot.

Middleton stepped up but his left-footed effort was superbly saved by 6ft7in Macey – and the goalkeeper was alive AGAIN to deny Kane's rebound.

The remaining minutes were nail-biting affair – Hibs had plenty of possession but couldn't find a way to break down the Saints' tough defence.

On 88 minutes a promising Hibs attack ended with Boyle on the floor – Walsh quickly branded a yellow card for simulation.

Boyle's reaction was that of a man resigned to defeat, both in that situation and in the tie as a whole.

And even when the fourth official gave Hibs a lifeline with five minutes of stoppage time, you felt that St Johnstone would still just hold on.