MANCHESTER UNITED face a frustrating task replacing Ole Gunnar Solskjaer and are likely to end up appointing an interim manager.

The Norwegian, 48, was sacked on Sunday morning just hours after the 4-1 mauling against Watford. 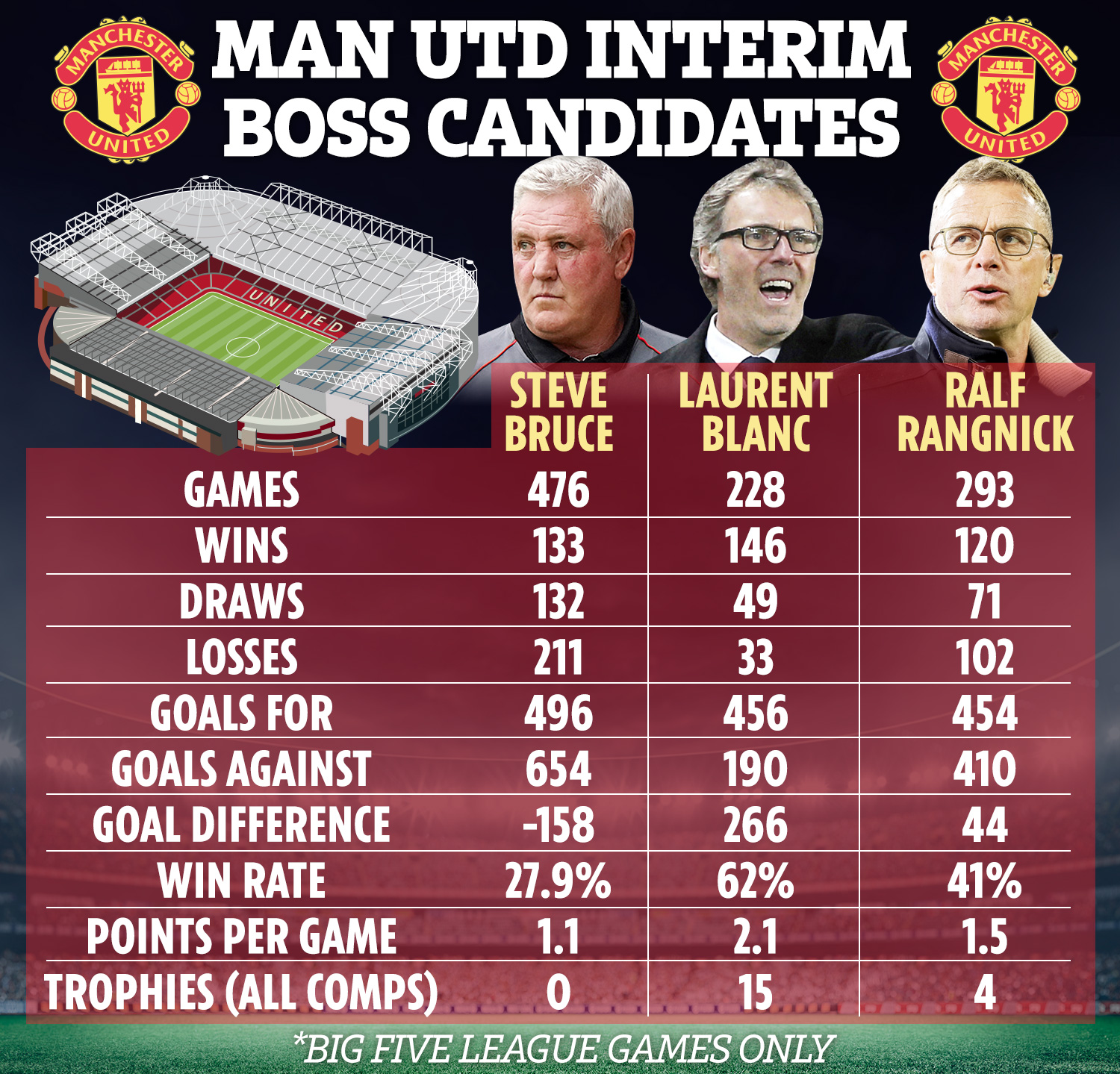 Michael Carrick was swiftly named his short-term replacement with Mauricio Pochettino and Zinedine Zidane the favourites to take the job permanently.

Pochettino is currently in charge of Paris Saint-Germain, with Zidane potentially replacing him at the Parc des Princes should the ex-Tottenham man head to Old Trafford.

However, it's unlikely United land their man before the summer.

And that means they are likely to hunt for another interim manager to steady the ship until the end of the 2021-22 campaign.

Club legend and recently-sacked former Newcastle boss Steve Bruce is one name to have been thrown into the mix.

Another ex-United defender, Laurent Blanc – currently in charge of Qatari side Al-Rayyan – has also been tipped to take over, with ex-RB Leipzig chief Ralf Rangnick, now head of sports and development at Lokomotiv Moscow in the frame.

But of the three, who would be the best fit? SunSport crunches the numbers…

Based on Big Five Leagues experience, Bruce reigns supreme with 476 matches under his belt, to Rangnick's 293 and Blanc's 228.

But that's where the former Toon chief's lead ends.

Bruce, 60, sits bottom in win rate, points per game and trophies – as well as being the only chief on the shortlist to have a negative goal difference.

Blanc, 56, leads the way in wins, goal difference, points per game, trophies and win rate – but his numbers are somewhat warped thanks to taking charge of French heavyweights PSG for three years.

Rangnick, 63, sits in the middle in every category – making the decision seem pretty cut and dry on first glance.

After all, Blanc is currently in charge of Qatari side Al-Rayyan, with Rangnick also working in a boardroom position for Lokomotiv Moscow.

Bruce is the only unemployed manager of the three.

And while the ex-United defender might sit bottom in terms of stats, he has taken charge of the likes of Hull and Newcastle – relative minnows compared to PSG and Leipzig.

On top of that, Bruce has Old Trafford in his blood having played for the club for nine years between 1987 and 1996 – winning three Premier League crowns and the FA Cup on three occasions.

There's no doubt emotion will hold some weight in the decision-making process at United.

It's that same emotion that saw Solskjaer take charge in the first place, despite his relative lack of managerial experience.

Solskjaer was, of course, signed as interim manager following Jose Mourinho's sacking in 2018 before taking on the top job just months later.

And while the next interim manager is almost certain to be told they will be in charge until the end of the season regardless of results, that's not to say they won't want the best option.

But who will United turn to before making their move for Poch.. or Zidane?

NHL commissioner Gary Bettman slows down rumors on next season: ‘Still too much we don’t know’

Steelers to sit Roethlisberger for finale against Browns