Many of the classic hallmarks of an Australian summer were present at the Portsea Swim Classic on Saturday: sunscreen, sand and swimmers.

But there were some key differences this year, with some participants wearing face-masks as they stood in socially distanced queues ahead of the race. 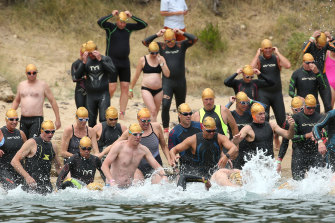 President of the Portsea Surf and Lifesaving Club Matt Mahon said the event had been impacted in a number of ways due to the current surge in coronavirus numbers in Victoria.

Participants were required to enter the week before the race, he said, to reduce the need to transport people from the registration area to the starting line. Entrants were also required to show their vaccine certificate before they could take part.

To enable social distancing, double the usual number of buses were hired for swimmers who did not have their own transport to get from one location to another. Those who were bussed to the starting line were required to wear masks and maintain a distance. 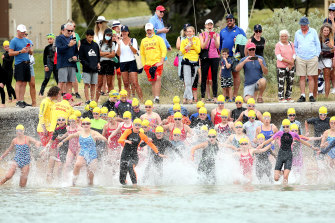 While slightly fewer swimmers took part thisyear, with about 1900 competing on the day, it was a feat in itself to stage the event.

“To be able to deliver an event, in a COVID-safe way, and to allow people to still swim, has just been fantastic,” Mr Mahon said.

“We’re really fortunate, we’ve gotten a lot of volunteers through the life saving club who have been happy to put their hand up and come and volunteer.”

Sophie Thomas, 25, who won the Open Female race, said she was happy with the measures that were taken. 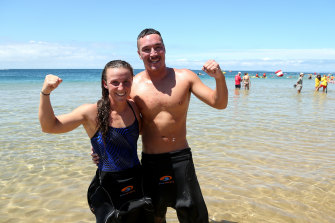 “We’ve had events cancelled all year… so it’s always nice to see a club go the extra mile to take precautions and let the event to go ahead.”

Three generations of the Hare family competed in the mixed race category, as 83-year-old Bob Hare swam alongside his son, Andrew, 59, and his grandson Hunter, 20.

It’s a popular category, giving people the chance to swim with someone outside their age bracket. 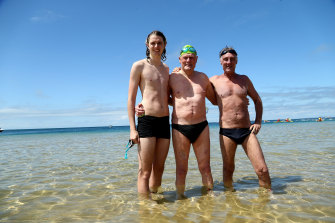 “If my 83-year-old grandfather can do it, I think I can do it,” Hunter laughed.

But despite the 63-year age gap between grandson and grandchild, the competition was still on.

The trio began together, before Hunter quickly took the lead and crossed the finish line solo, with his father and grandfather finishing within minutes of each other.

“It was a good swim,” Andrew said. 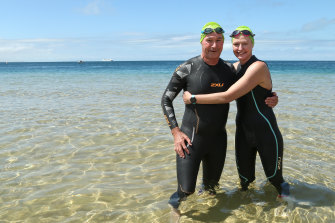 Stuart Jones and daughter Sarah Blackman swam in the Classic, a year after Stuart had a heart attack.Credit:Hamish Blair

This year the race held a special meaning for Stuart Jones, 71, and his daughter, Sarah Blackman, 39. The pair who swam together in the mixed category, crossing the finish line arm in arm.

After completing the race in 2021, Stuart went into cardiac arrest and became unresponsive.

“[It was] the best place for it to happen because there were life savers everywhere,” Mr Jones said.

The medical team at the event performed CPR, before Stuart was transported to hospital by ambulance where he underwent open-heart surgery the following day.

After several months of rehab, and slowly getting back into swimming, Stuart was excited to be back just a year on, competing again with his daughter.

“We’ve been through a big year… it’s so nice to be able to do this a year later,” Ms Blackman said.