During his Paralympics debut in 1996, runner Tim Matthews remembers quizzical looks from locals as the Australian team explored the host city of Atlanta. "People would literally stop you on the street and say, 'Hey, what are all you disabled people doing here?'"

Many who went to Atlanta remember its Paralympics as a mess. Contractors began packing up the Olympic village before the Paralympians moved in, Matthews had to direct bus drivers to venues himself, and barely any locals knew about the Games, let alone turned up. "It looked like we were competing in the middle of COVID," he says. "There was literally no one there." 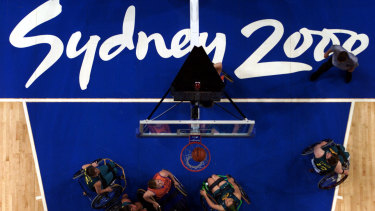 The Paralympics grew from a British sports competition for veterans with spinal cord injuries after WWII. The first official games were held in Rome, but it was not until Seoul in 1988, almost 30 years later, that the Olympics and Paralympics were held in the same city. And only after Sydney – and partly in response to its success – did it become mandatory for an Olympic city to host both.

After the chaos in Atlanta, Sydney's two organising committees resolved to be more coordinated. They mostly succeeded (Paralympic sources say Olympic organisers only signed Kylie Minogue for their closing ceremony when they heard she'd be opening the Paralympics). But resources were far from equal. As the Olympics soaked up sponsors and headlines, the Paralympics battled to raise awareness and funds.

"When I came on board in 1997, I was surprised at how the knowledge of the Olympic Games was at a tertiary level, but knowledge of the Paralympics was a kindergarten level," says Margie McDonald, who was the communications director for the Sydney Paralympic Organising Committee (SPOC). "People knew it was disabled sport. They weren't sure how confronting they were going to find it – whether it was going to upset them to see someone with one leg high jump, or with no arms swim." 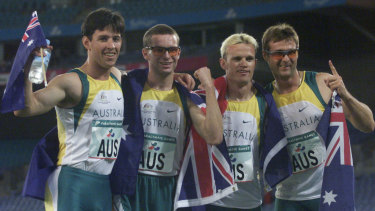 McDonald and her team began an education campaign. One of their most successful ideas was a pen pal scheme linking athletes with a school. Francis, who ran in amputee events after losing part of his arm in a mincing accident, remembers a letter from a third grade student at a Victorian primary. The student recounted how they had performed at their school carnival, and finished with, "I have no idea how difficult it must be for you to get up out of your wheelchair and run 400m each time!" Francis still chuckles when he thinks about it, but "it was also a great snapshot of how Australian kids saw disability before the Paralympics," he says. "[They thought it meant] being in a wheelchair."

The Sydney Olympics were, in IOC president Jan Antonio Samaranch's words, the best ever. Sydneysiders were intoxicated with their success. "I don't think we went into the Paralympic Games thinking, 'We've got a lot to live up to," says Matthews, who is now the senior manager of para sport for Paralympics Australia. "We did think we'd need to put on a good show from an athletic perspective. If we did that, people would want to watch. They'd walk away thinking, 'That was awesome sport, I'm coming back'."

In the days before the Games, "we were worried about the crowds and athletes performing for empty seats," says McDonald. But the government subsidised school excursions, so the first heats were cheered on by excited kids. They went home and told their parents, and 1.25 million day passes soon sold out. Quickly, says McDonald, spectators dropped their pity – "which athletes hate" – and were swept up in the spectacle. "They're on their feet yelling and screaming like a normal sports fan," she says.

Mostly, the media got on board, too. The commercial broadcaster of the Olympics was only interested in brief highlights, so the ABC stepped in. News organisations sent big reporting teams and "gave us great respect," says McDonald, although some required a tutorial in terminology, such as refraining from describing athletes as being "confined to a wheelchair".

There were many highlights. Siobhan Paton owned the pool, winning six gold medals and setting six world records in the intellectually disabled events. "My peers can look at me as a hero now, not someone to torment," she said at the time. "I've had enough of the tormenting. They just did it because I was an easy target. I don't think there will be any teasing any more." 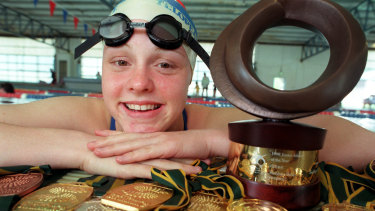 Swimmer Siobhan Paton with some of her career spoils Credit:Fairfax media

Tim Sullivan won five gold medals in cerebral palsy events at the track, and would go on to win many more in Athens. Louise Sauvage, Australia's most well-known Paralympian at the time, won one of her events but was upset in another by her arch-rival Chantal Petticlerc, who would go on to be one of the great Para-Athletes of the next decade. Kurt Fearnley, who is now Australia's best-known wheelchair racer, kicked off a long and decorated career.

The crowds lapped it up. "They might have been going with good intentions – 'I need to support our poor disabled athletes'. They came back because it was really good sport," says Matthews. "They knew what was a good performance, and they knew what wasn't. We don't want to be cheered just because we're there. A pat on the head because we're alive and that's the main thing. We want our performances recognised."

Sydney also adopted the Cambodian volleyball team, 10 of whom had lost limbs to landmines, and the East Timorese, who arrived in Sydney without athletic shoes. The Herculean efforts of a Chilean swimmer born with one leg and neither arm fully formed brought the crowd at the pool to its feet over and over again. "If the Olympics elevated the spirits, it was the Paralympics that touched the soul," wrote Herald reporter Anthony Dennis in his wrap of the closing ceremony.

Any preconceptions that disabled athletes were somehow more virtuous were also crushed. The Paralympics recorded more positive drug tests than the Olympics. The Spaniards were stripped of their gold medal in the intellectually disabled basketball competition after it was revealed they stacked the team with able-bodied athletes. Investigations found only two players had IQs below 70 as the rules required; the other 10 had fake medical certificates. Australia learned what Paralympics athletes had long known. This was ultra-competitive, high-stakes sport.

Matthews remembers a wheelchair basketball player reading a newspaper report about his team's loss. "The story talked about how they didn't play well as a team, they'd played as a group of individuals," says Matthews. "He felt as though the movement had made it because the article was written by a sports journalist and critiqued the way they played, not how amazing it was to see someone in a wheelchair play basketball."

Australian athletes say their own eyes were opened by the games. "The village was like nothing I've ever seen before," says Brad Dubberley, who was then on the wheelchair rugby team and is now its coach. "The most incredible feats of getting around and doing stuff. You'd think, 'how the hell is the guy with no arms going to eat that hamburger? [He ate it with his feet]. 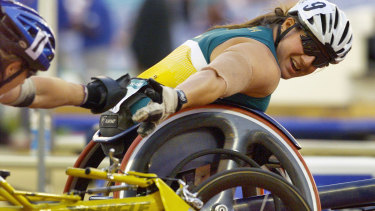 Louise Sauvage receives the congratulations of Jean Driscoll of the United States after winning the 1500-metre final of the Sydney Paralympic Games.Credit:Reuters

"Everything from the dwarfs to the giants to all sorts of different impairment types, which even in the Paralympic environment we're not used to seeing. You see people playing table tennis with their mouth and still beating able-bodied athletes."

Greg Hartung, who was the vice president of SPOC and now heads the Australian Paralympic Committee, would bring medallists to the Ansett marquee to sign autographs after their events. Every day, the queue would be hundreds of metres long. "That was a sensational breakthrough in the perception of athletes," he says. "There's a fabled story where a young able-bodied child of about 10 attended the wheelchair basketball, left the stadium and told his parents, 'I now know what I want for Christmas. A wheelchair."

Francis believes the Sydney Games were a turning point for Australian athletes. "The huge strides that Kurt Fearnley and [tennis player] Dylan Alcott have continued to make have only been possible from the support Australians now have for disability sport," he says. It grew the kind of awareness that made more change possible, too. "I firmly believe that social changes in Australia like the NDIS National Disability Insurance Scheme] being enacted were possible as a result of Australia hosting the Paralympics in Sydney," says Francis. "It definitely wasn't the only factor, but I think it played a big part."

Matthews says Sydney brightened the future of countless Australian children with disabilities, and the Paralympic movement has built on that success to inspire many more. Four years ago in Brazil – a country well behind Australia in its attitudes towards people with disabilities – Matthews met a boy with cerebral palsy who had just attended some Paralympic events. "He had calipers on his legs that looked like they were from the 1930s. But that night, he had his tracksuit pants pulled high. His mum said he wanted everyone to know he had a disability."

Sports news, results and expert commentary delivered straight to your inbox each weekday. Sign up here.