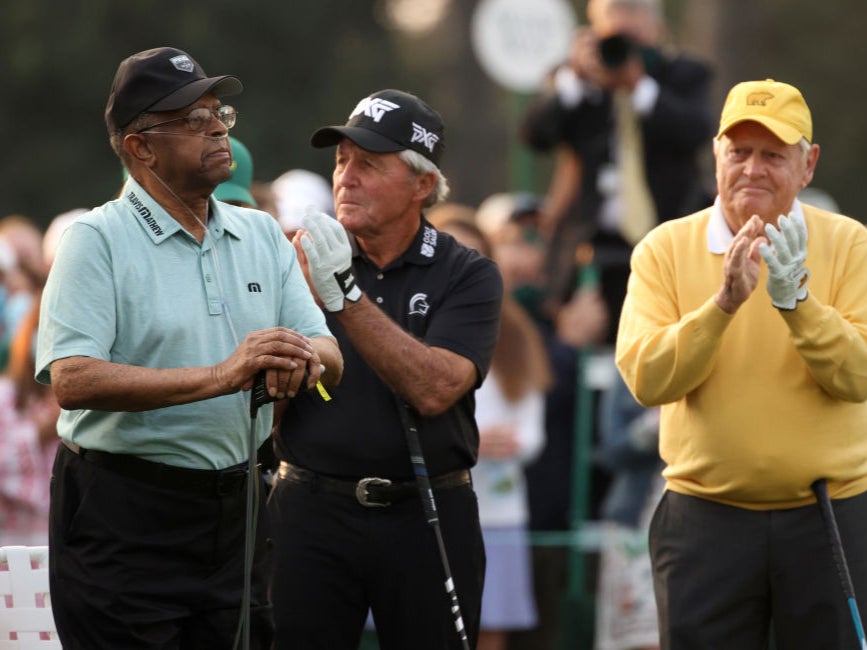 Follow all the action as The Masters gets underway in what promises to be a thrilling first major of the year, with Augusta’s greens exceedingly fast and firm after last November’s soft conditions.

Dustin Johnson is bidding to defend the Green Jacket after his record-breaking victory but arrives in somewhat questionable form. Meanwhile, after a disappointing previous outing, Bryson DeChambeau will once again rely on his gunslinging heroics to dismantle one of golf’s most revered courses.

Rory McIlroy has been out of form, too, but has been inspired by a recent visit to Tiger Woods’ home and remains desperate to complete the career Grand Slam. Justin Thomas is sure to be a threat, after a strong finish last year and a cathartic victory at the Players Championship. Jon Rahm has not been able to practice properly ahead of the tournament, owing to the birth of his first child, but has a great record at Augusta and warmed up brilliantly on Wednesday as he seeks to clinch the maiden major of his career.

Johnson was a popular winner last year, having grown up just an hour away from Augusta, however, it’s Jordan Spieth who will surely be the crowd’s favourite, with a limited number of spectators allowed through the gates. The past champion ended a four-year trophy drought last week at the Texas Valero Open and has been in terrific form for several weeks. The same can be said of Lee Westwood, who leads the English charge alongside Matt Fitzpatrick and Tyrrell Hatton.

It might mean little at the moment, but we do have action on the course as the very first groups get underway. Hudson Swafford is off to a flier, birdieing the par-5 2nd before a wonderful 182-yard tee-shot into the par-3 4th. He’ll have just 9ft to take the outright lead and leave Sandy Lyle in his wake. The 63-year-old Scot, who won a Green Jacket in 1988, was still spending hard hours practising his chipping yesterday and made good use of that on the 2nd with a wonderful approach that left a simple tap-in for birdie.

It may be Dustin Johnson who is defending the Green Jacket this week but no player is drawing attention quite like Bryson DeChambeau in the absence of Tiger Woods. The US Open champion is testing a new driver this week, specially made to account for his sickening swing speed, and has promised to take aggressive lines off the tee. Here, we examined the mind of golf’s polarising genius with insight from his first coach, Mike Schy, and the trainer who’s overseen the American’s dramatic physical transformation, Greg Roskopf. 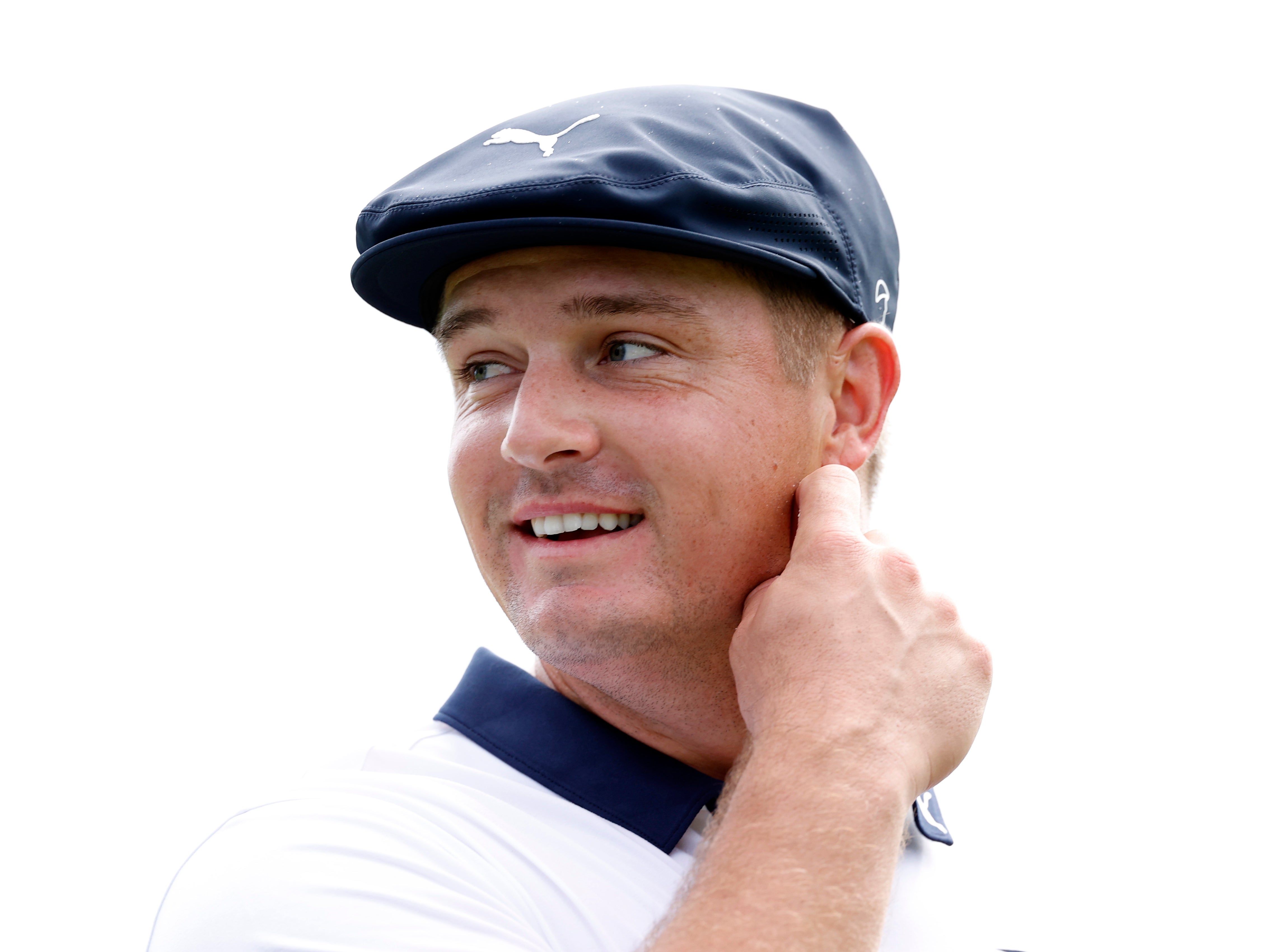 Inside the mind of Bryson DeChambeau, golf’s polarising genius

THE MASTERS 2021: FIRST ROUND PIN POSITIONS

Here are the pin positions for today’s first round. The speed of the greens has caused quite the stir at Augusta, with the course in tremendous and exceedingly quick condition.

Lee Elder, the first black man to compete in The Masters, made history as an honorary starter at Augusta alongside Jack Nicklaus and Gary Player as the 85th edition of the tournament officially got underway.

Elder made his debut at Augusta National in 1975 and recorded a best finish of joint 17th in 1979 from six appearances. The 86-year-old was not able to hit a ceremonial drive on the opening hole but was warmly applauded after being introduced to the spectators by Masters chairman Fred Ridley. Nicklaus, 81, and Player, 85, hit drives on the first before retiring to the clubhouse. 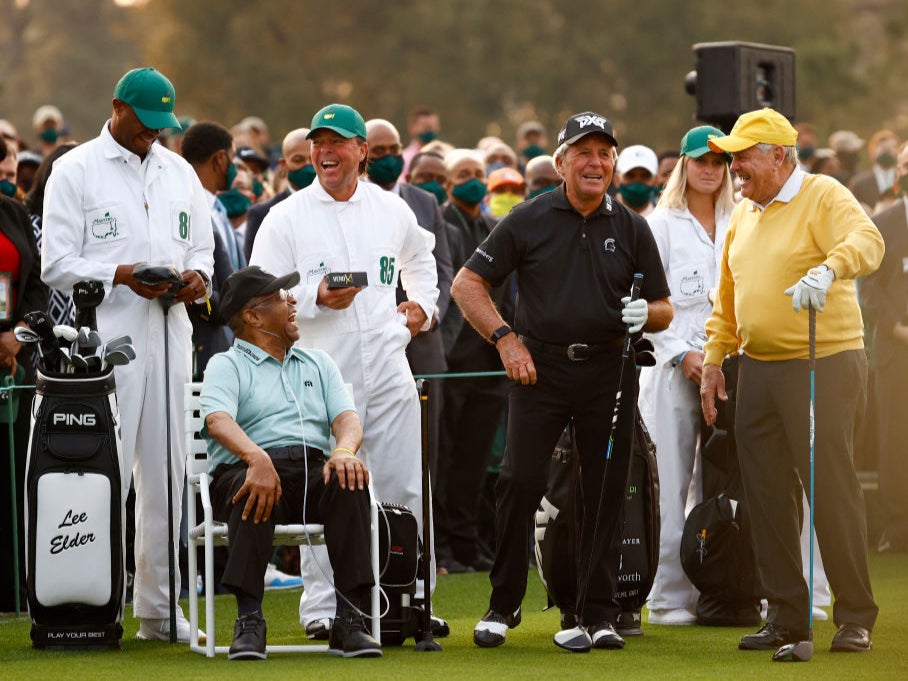 THE MASTERS 2021: FIRST ROUND TEE-TIMES

Defending champion Dustin Johnson will tee-off at 3:30pm alongside Lee Westwood and they will be closely followed by Rory McIlroy, Jon Rahm and Xander Schauffele in the day’s most exciting group. Meanwhile, Bryson DeChambeau (6:36pm) and Jordan Spieth (7:00pm) will be among the last to reach the clubhouse.

WELCOME TO THE MASTERS

Welcome to The Independent’s live coverage of The Masters as Dustin Johnson bids to defend the Green Jacket after his record-breaking victory last November. Augusta promises to provide a far more unforgiving test this time around, with the greens exceedingly fast and firm, but that threat will do little to deter Bryson DeChambeau, who’s attempting to dismantle more of the sport’s sacred turf. Elsewhere, Jordan Spieth arrives as one of the favourites after ending his four-year trophy drought at last week’s Valero Texas Open, while Rory McIlroy is, as ever, attempting to complete the career Grand Slam. One of the true highlights of the golfing calendar is upon us, and we’ll bring you all the action over the next four days.

Horse racing tips TODAY: This 8-1 shot at Kelso can break the bank for punters on Sunday