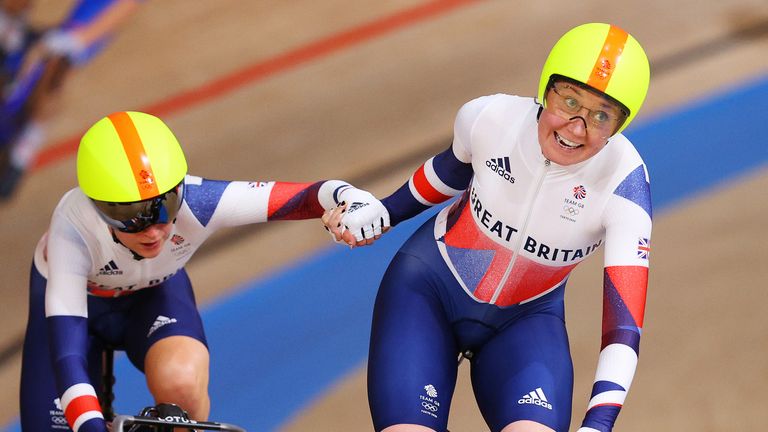 Katie Archibald and Laura Kenny have won a gold medal for Team GB in the women’s madison event inside the Izu Velodrome at the Tokyo Olympics.

It was a fifth career Olympic gold for Kenny, who surpassed Dutchwoman Leontien Zijlaard-Van Moorsel to become the most successful female cyclist in Olympic history as she took gold at a third consecutive Games.

The British pair looked in control from the off, winning the first three sprints on the track and then further extending their advantage after the Dutch pair of Kirsten Wild and Amy Pieters, reigning world champions, were caught in a crash with a little over 70 laps remaining.

In the second half of the race, the British duo got themselves in a series of breakaways, hoovering up points in the sprints and gaining a lap with a little over 20 to go to build an all-but-insurmountable lead.

By the end of the race, they had won 10 of the 12 sprints – including the double points for the last lap – to finish with 78 points, more than twice the tally of second-placed Denmark on 35.

In winning this gold, Kenny has become the first British woman to win golds at three consecutive Olympic Games and is the joint most decorated British female athlete alongside Charlotte Dujardin.

“It’s unbelievable. I am just so glad,” Kenny said, as she reflected on their race win.

Archibald added: “I’ve been dreaming about this. I’ve never wanted something so much and I’ve never been so nervous. But we’ve been clinical in our approach.

“I’d like to thank our coach Monica [Greenwood]. None of this would have happened without her as she overhauled our approach to this event.”

“Monica is married to Ben, who is the U23s’ coach,” Kenny shared. “We’ve done this exact plan five times [with the U23s].

“I’ve never felt so in control of a race in my life. It felt like we were just repeating a race that we’d already done three or four times [in training with them].”