TWO people have been arrested and the Liverpool team bus was BLOCKED as around 2,000 Manchester United descended on Old Trafford to protest the Glazers' ownership.

Fans set off smoke grenades and flares outside the stadium while a side street was blocked briefly as two were arrested for public order offences. 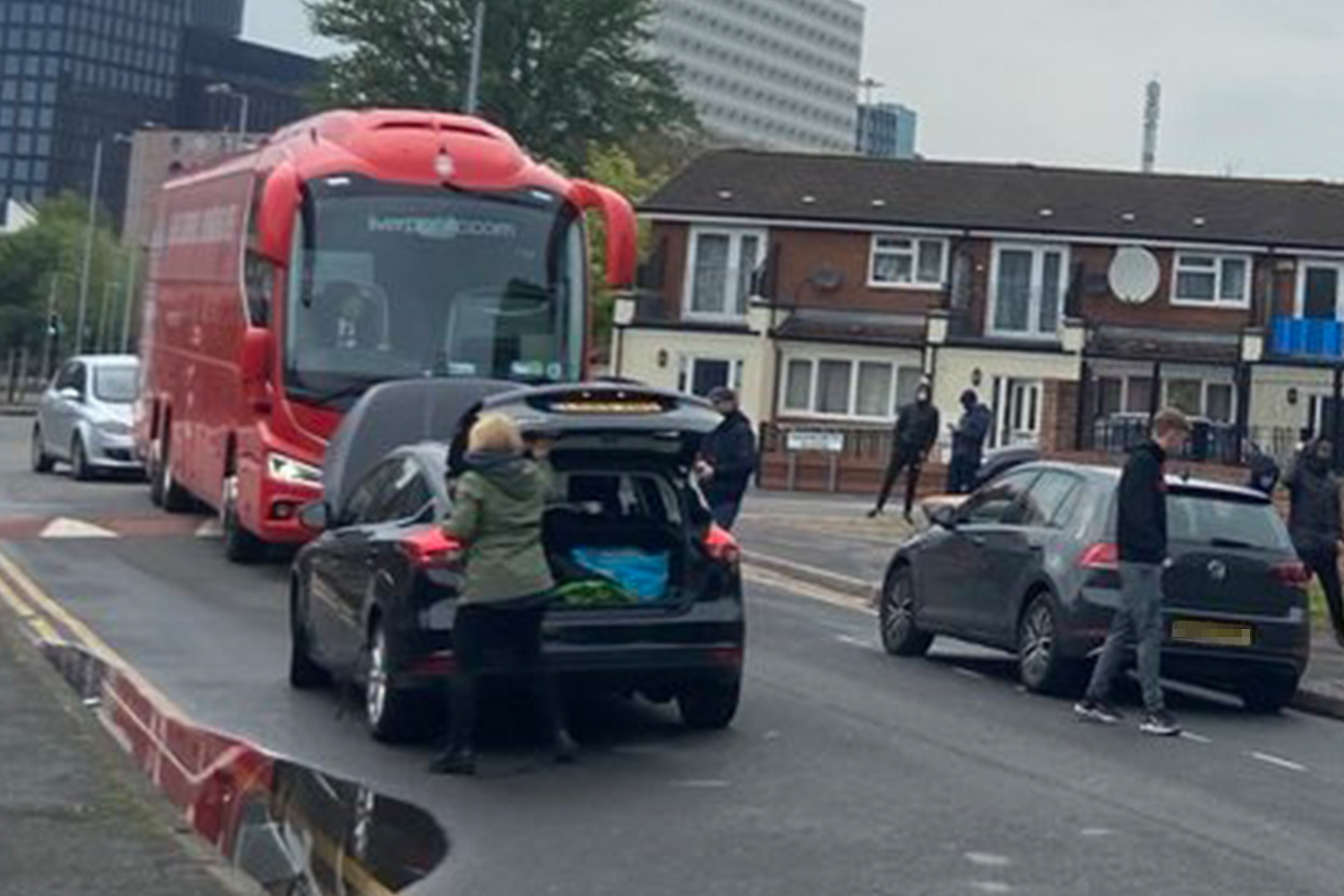 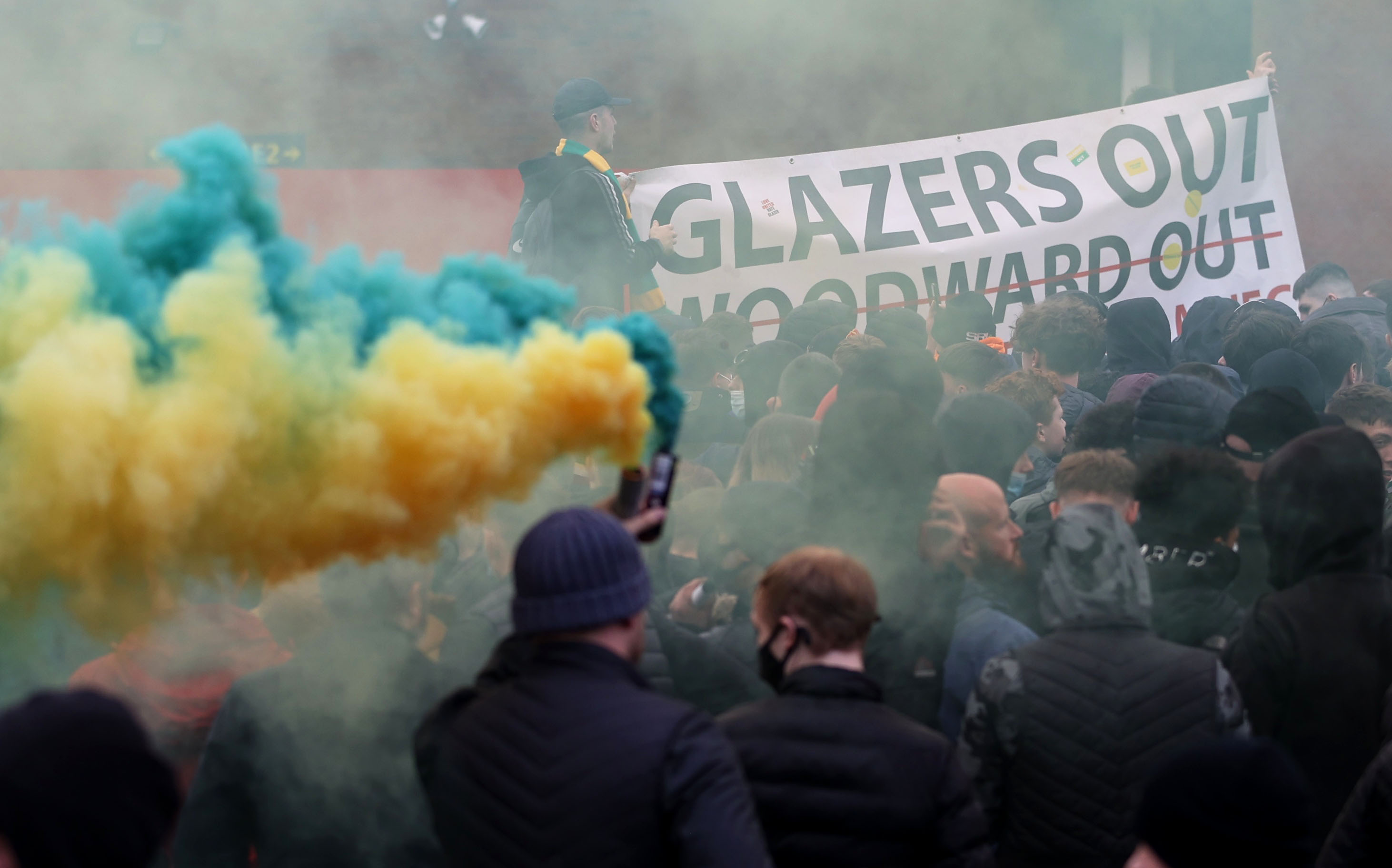 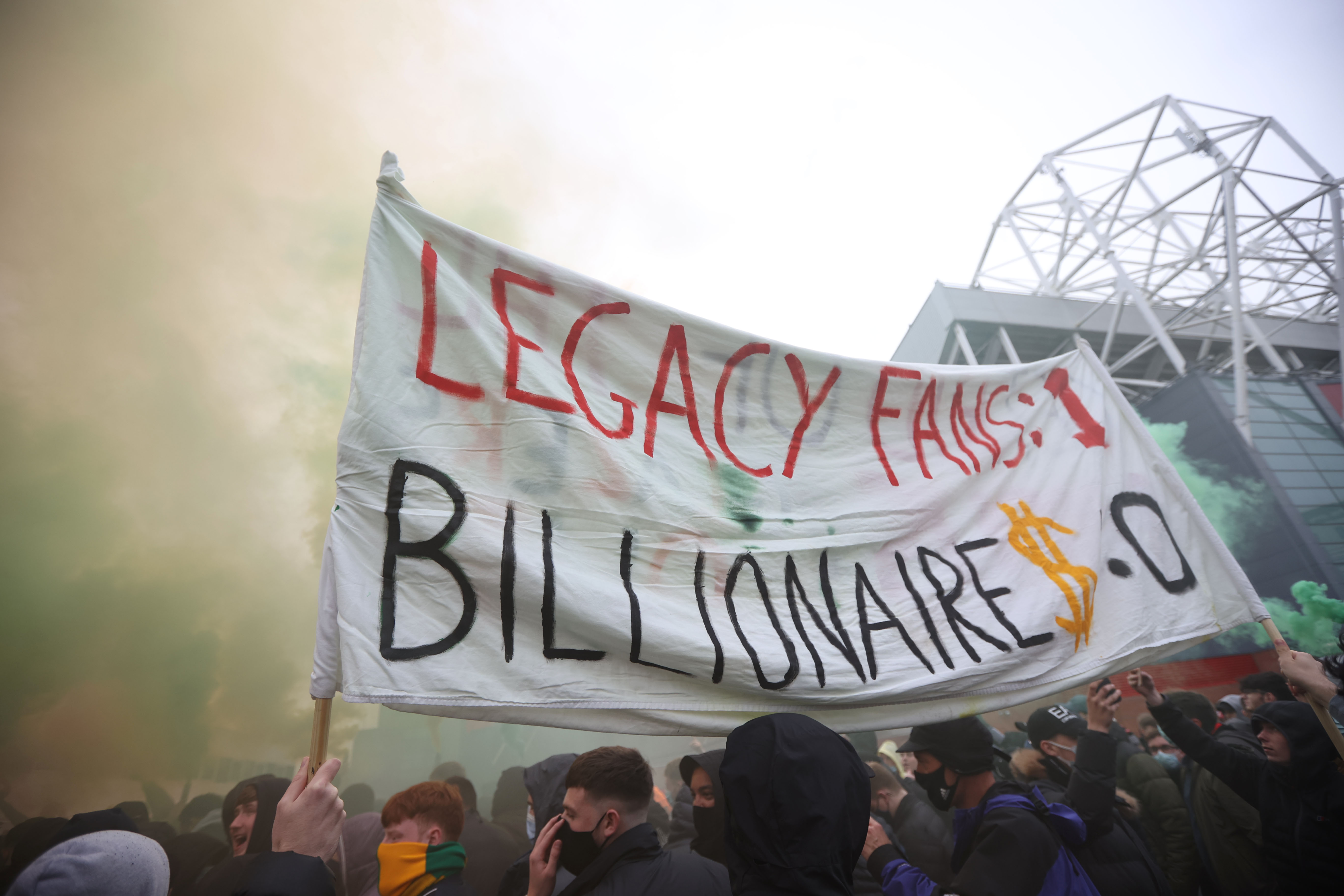 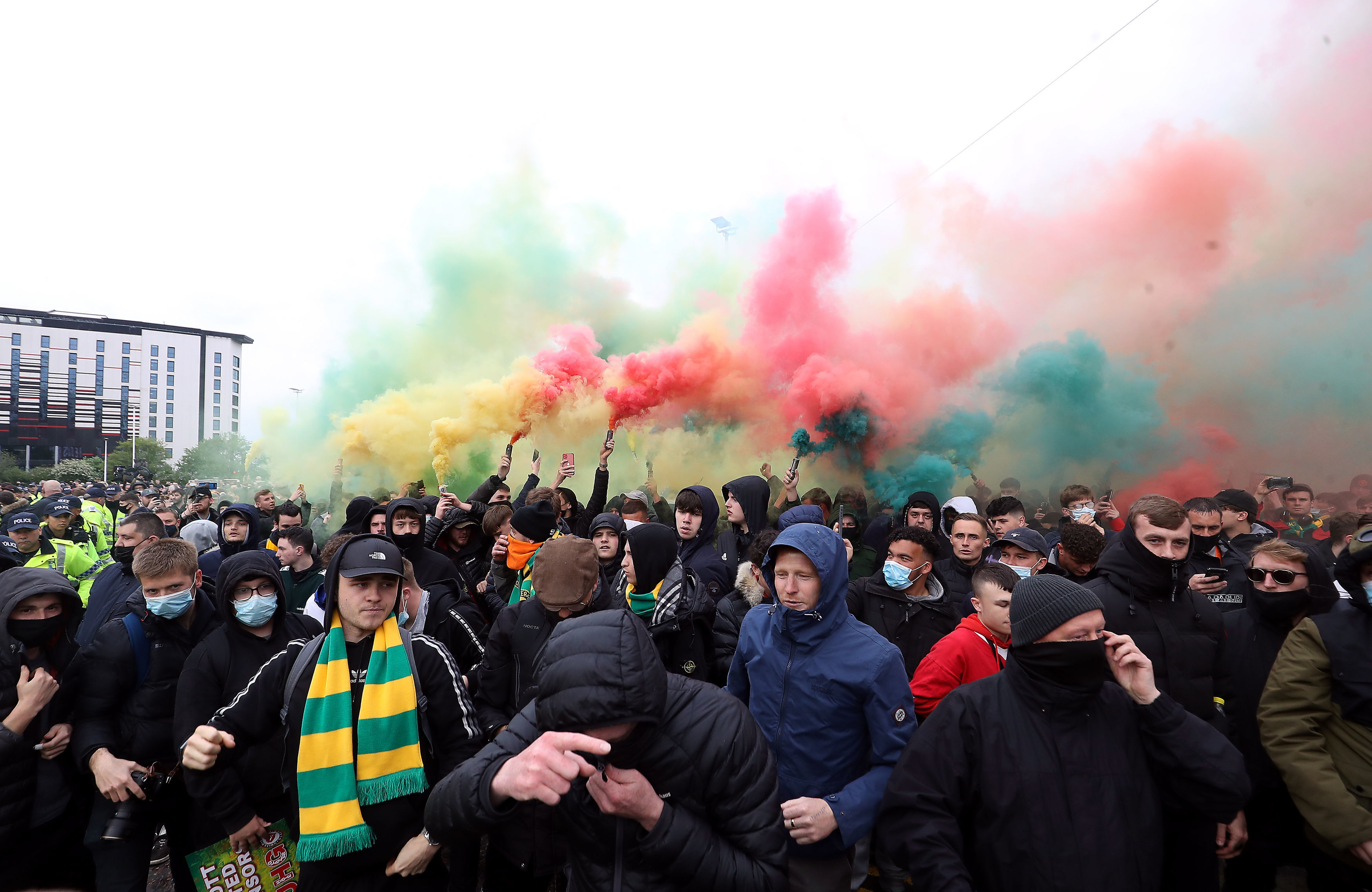 "Officers in attendance to maintain safety while facilitating right to peaceful protest. Two arrests made for public order offences."

Images on social media showed the vehicle held up by cars on a quiet road with Manchester city centre in the background.

And it has also been claimed the coach's tyres were then let down.

However, it was later revealed that the usual red bus was actually a DECOY – with Liverpool's players arriving to Old Trafford in a separate bus via a back entrance.

Pictures showed police arriving at the scene to disperse those blocking the red bus. The cops quickly stopped the reported 50 protestors from holding up the vehicle any longer.

And the coach was soon on its way towards the Theatre of Dreams for the north-west derby.

It eventually arrive at its destination before 7pm. However, United fans welcomed it to Old Trafford by setting off smoke bombs and flares, with Sky Sports also claiming some threw bottles.

Police in riot helmets barred entrance points as supporters brandished banners with anti-Glazer slogans in scenes reminiscent of 11 days ago, when the game was originally meant to be played.

United supporters descended on Old Trafford to protest the Glazer family. in large numbers ahead of kick-off on Sunday, May 2.

A large group broke onto the pitch as police struggled to contain those outside the stadium in what was a largely peaceful protest.

And it soon became clear the game would not be able to go ahead.

United were left fuming when it was announced they would have to play three games in five days after getting their new Liverpool date.

The Red Devils beat Aston Villa on Sunday before losing to Leicester on Tuesday after fielding a heavily-changed side. 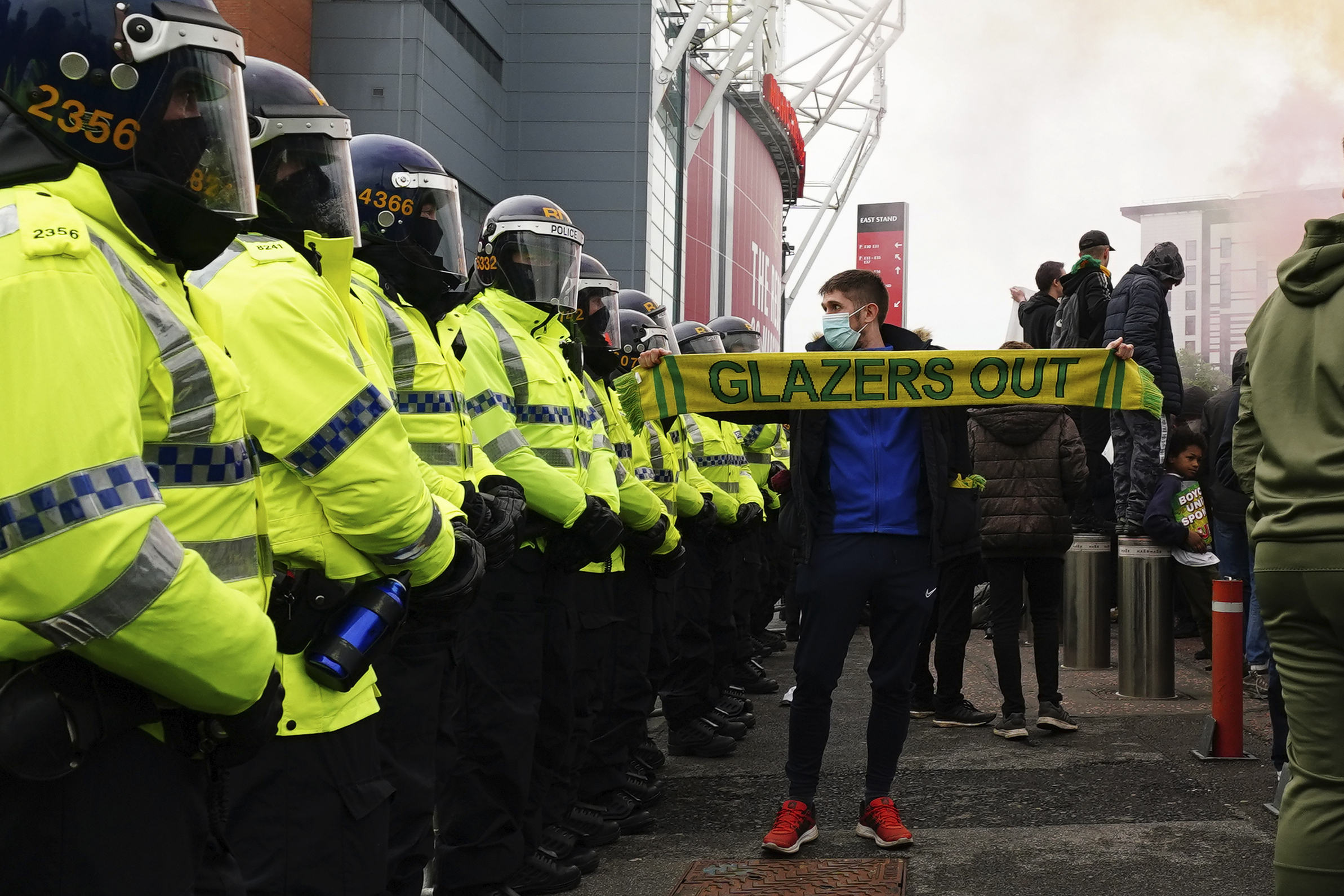 But Ole Gunnar Solskjaer is expected to restore the usual faces to his XI tonight, with the likes of Edinson Cavani, Bruno Fernandes and Paul Pogba all in line to play.

Following the original cancelled game, United have been keen to ensure tonight's match goes ahead without any problems.

Players turned up at Old Trafford SEVEN hours early to prevent being held up outside closer to kick-off.

Meanwhile, a top-secret operation to foil further anti-Glazer protests was launched at the start of the week, with players sworn to secrecy and some staff even kept out of the loop to prevent leaks.

A 10ft 'ring of steel' has also been built around the more vulnerable areas of Old Trafford, including the Munich Tunnel entrance which fans got through last time round.