Mack Horton has been delivered a serious wake-up call just months out from the Olympic trials as the next generation of Australian freestylers set their sights on his spot at the Tokyo Games.

The Olympic 400m champion now has a major fight on his hands to not only defend his gold medal in Rio but lock down a starting berth as rising stars Elijah Winnington and Thomas Neill, along with proven distance ace Jack McLoughlin, throw down the gauntlet. 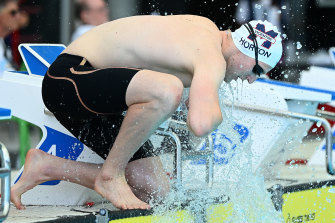 Olympic 400m champion Mack Horton didn’t contest the event at the Australian Championships – and came just 35th in the 200m.Credit:Getty

Horton struggled at the Australian Swimming Championships on the Gold Coast, finishing 35th in the 200m and a distant seventh in the 800m timed final, almost 30 seconds behind Neill, an 18-year-old Queenslander who stormed through the junior ranks and is taking huge strides every time he races.

He then withdrew from his pet 400m, the race in which he so famously won Olympic gold in Rio, as Winnington (3:45.69s) and Neill (3:46.35) completed the quinella, with Winnington continuing his superb form this year having already clocked an Olympic qualifying time.

Horton is notorious for his struggles to be competitive when he’s in a heavy training block and senior figures in Australian swimming were split on his efforts during the week. Some privately expressed concerns given the amount of time he needs to find over coming months, while others suggested his work in training behind closed doors in Melbourne would see him rise to the occasion once again.

He mistimed his run leading into the FINA World Championships in 2019, when he finished second in the 400m at trials but failed to hit the qualifying mark. He travelled to Korea as a 200m relay swimmer and was able to take his spot in the 400m field given he had completed an A qualifying time, which is slower than the stringent standard now set for the Australians (top eight at the previous world titles).

But when he did swim, he largely delivered, finishing second to Sun Yang and proving he could still fire on the international stage. He later produced one of the best swims of his career to anchor the 4x200m relay to a gold medal.

Even if Horton at times looked like he was standing still on the Gold Coast this week, his rivals weren’t waiting around. Winnington has taken the mantle as Australia’s in-form men’s 400m contender while Neill, who also takes on the longer distances, looks like the kind of fearless young talent who can slash seconds off his time in a hurry.

The reality for Horton is that he is no good thing to be there in any capacity in Tokyo given the hugely competitive talent clambering for spots in both the 400m and 200m events. How he fares will be one of the most intriguing storylines for the sport heading towards the Olympics.

Winnington, 20, is ambitious and hungry and believes he can be a serious medal contender. He said he expected Horton to hit back hard at the trials in Adelaide in June but was keeping a steely focus on his own progression.

“He’s the Olympic champion. He had a sluggish meet at world trials and gets a silver medal behind Sun Yang. The guy can swim so you can never count him out but he’s in his work and that’s all behind closed doors. I can’t worry about that, I have to be prepared for him to be on come Olympic trials,” Winnington said.

“First and foremost it’s just getting on the team. What comes with that on an Australian team is that you’re in medal contention anyway. First goal is get my ticket to Tokyo and take it from there.”

World champion Ariarne Titmus looked excellent as she demolished the field in her 400m freestyle, touching in 4:01.34s in a swim that has given her immense confidence in her injured shoulder. She will race in a meet in Sydney next month and wants to bank a sub-four minute swim ahead of trials.

“That would be great for the confidence. Leading into worlds, I did a couple of 3:59s in work. Maybe with another month, two months of work, I can definitely get there,” Titmus said.

Kaylee McKeown (2:09.78) and Mitch Larkin (1:56.74) turned in world-class times in their respective 200m individual medleys, although it hasn’t helped Larkin decide on his Tokyo program given the champion backstroker can’t swim the 200m back and 200m IM due to a schedule clash.

Sports news, results and expert commentary delivered straight to your inbox each weekday. Sign up here.