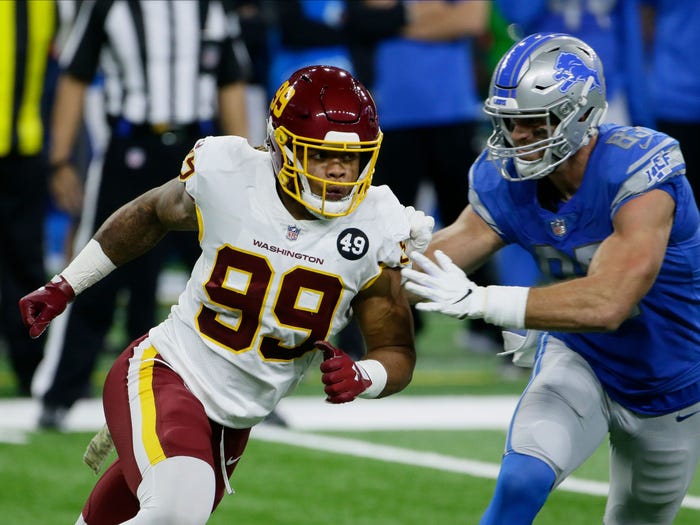 Rookie defense end Chase Young is one of the most disruptive young pass-rushers in the NFL, but on Sunday, his aggressiveness cost the Washington Football Team a shot at victory.

After trailing 24-3 in the third quarter, Washington fought their way back against the Lions, with kicker Dustin Hopkins putting a 41-yard field goal through the uprights with just 16 seconds remaining to tie the game 27-27. At the time, it looked as though Washington had done enough to force overtime.

But Detroit came out and tried to make the most of their final 16 seconds of regulation. Quarterback Matthew Stafford connected with wide receiver Quintez Cephus for a quick 10-yard strike. On the next play, Stafford missed another pass to Cephus, leaving just six seconds left on the clock.

This likely would've meant overtime in other circumstances, but Young was flagged for a late hit on Stafford, giving the Lions 15 yards without taking any time off of the clock, and moving Detroit to midfield.

The Lions made the most of Young's mistake. After Stafford hit Marvin Jones for one more quick gain, kicker Matt Prater trotted out to attempt a 59-yard field goal to win the game.

After the game, Young admitted that he had made a mistake.

"I just went for it, it was a rookie mistake. It happens," Young told reporters.

While it's nice of Young to acknowledge his error, it doesn't change the outcome. With the loss, Washington falls to 2-7 on the season, with losses in seven of their past eight games.