THIS is the astonishing moment a women’s football match descended into chaos as players exchanged pushes and punches and pulled their opponents to the ground by their hair.

Violence flared after an altercation between two players near the halfway line during a game in Argentina. 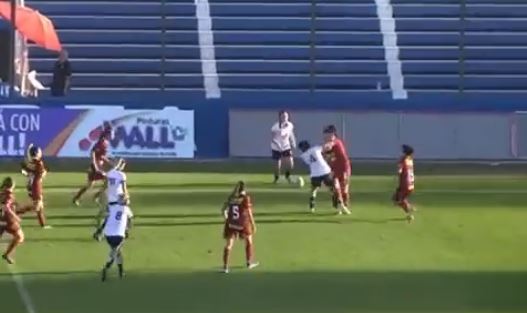 One delivered a right hook to her rival’s face after they squared up to each other.

Seconds later team-mates of both women rushed over and began exchanging blows.

The referee failed to regain control of the game as the two teams’ subs and officials rushed onto the pitch in a desperate effort to stop the violence.

The altercation lasted for more than half a minute before a tense calm was restored and the players were separated.

The astonishing scenes occurred during a derby match between Godoy Cruz and Las Pumas in a regional Argentine women’s league in the city of Mendoza.

One of the match commentators could be overheard saying as fists flew: “The match officials have lost control of this one. What we’re seeing is astonishing.”

One of the goalies appeared to be trying to separate warring players despite being pushed and punched as she attempted to play peacemaker.

Fights during men’s football matches in South America are not uncommon but such levels of violence are rare in women’s games.

It was not immediately clear if any players had been red-carded over the astonishing incident, which happened towards the end of the first half of Sunday’s game.

Godoy Cruz won the match 2-0 with a goal in each half.