Home » Sport » Where are the decent two-year-olds in Sydney before Christmas?

Kiamichi will look to make it a third straight Sydney Saturday two-year-old win for Godolphin as jockey Glyn Schofield questioned the depth of the latest local batch of bubs.

Tassort rocketed into Golden Slipper favouritism with a powerhouse victory at Rosehill a fortnight ago before stablemate Athiri, with Schofield aboard, landed the prize last weekend. 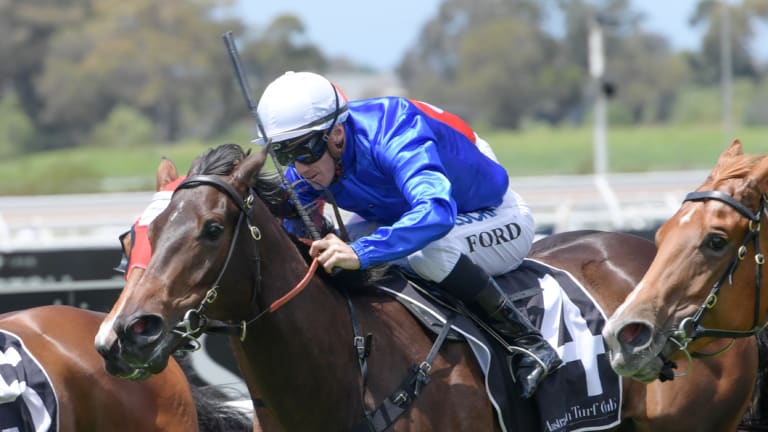 Improving: Kiamichi wins on debut and will look to chalk up another juvenile win for Godolphin at Rosehill in the first race tomorrow. Credit:AAP

Schofield, however, said aside from Godolphin’s two recent winners, there had not been too many others who had stood out from the rest of the pack.

Of the past 10 Golden Slipper winners, only this year’s winner, Estijaab, had not raced before Christmas. She Will Reign, Capitalist, Vancouver, Mossfun, Overreach, Pierro, Sepoy, Crystal Lily and Phelan Ready had all enjoyed a day at the races the previous year.

‘‘You usually get three or four standouts before Christmas, and we still have a few weeks to go, but to my eye there haven’t been too many dominant performances,’’ Schofield said.

‘‘Even with the Gimcrack Stakes [Catch Me] and Breeders Plate [Dubious] I didn’t think there have been many standouts.

‘‘These young horses can go quickly, they can go shin sore, go off, while some horses can fly under the radar and improve without noticing it. There’s so much to-ing and fro-ing.

‘‘I’m sure there’s plenty of depth, but it appears at the moment nothing has caught the eye. Maybe that’s why the bookies installed Tassort favourite straight away.’’

Kiamichi, a Sidestep filly, won a month ago in a small field and will take plenty of benefit for the trip to the races, said Schofield.

‘‘[Race experience] is a big asset to have, and not only do they have that race awareness but fitness on their side as well,’’ Schofield said. ‘‘She put herself on the speed from the get-go in her trial, and that transferred to her first win.

''She’s had a bit of time to think about it and let the penny drop. She did it first-up and there’s no reason to think she won’t improve from that again.’’

Awaiting Kiamichi will be Waterhouse colt Czarson, who won on debut at Gosford, and Team Snowden’s Redoute’s Choice colt Creator.

Schofield has enjoyed plenty of success for Godolphin, and it was the South African hoop who kicked home some of James Cummings’ earlier group 1s for the global stable, including Alizee and Kementari.

He will also wear the Godolphin blue on Etymology (Summer Racing Handicap) after placing at his past two starts, including at Flemington over 2000m during the carnival, and aboard ultra-reliable mare Deft later in the day.

Deft won third-up last preparation, drawn the rails and has missed a place once in eight career starts.

As for the two-year-olds, Breeders Plate winner Dubious is one of 14 nominations for next Wednesday’s Magic Millions race at Wyong.