Home » Sport » Why Is Everyone Talking to Ibai Llanos?

Outside, in the bright Parisian sunshine, the world’s news media lined up on the edge of the field at the Parc des Princes. Producers fiddled busily with cameras and boom microphones. Reporters chattered away, dutifully filling airtime before their designated interview slots.

They were under strict instructions and constraints: three questions apiece, a few minutes, no more, to mine the details of the biggest sports story of the summer, to get to the heart of a transfer that ended one era and ushered in another. And then their time would be up, and Lionel Messi would have to move on.

Ibai Llanos’s setup was different. He had been ushered inside the players’ tunnel, along with two of his oldest friends, Ander Cortés and Borja Nanclares. They had no sound equipment. They were filming on a phone. Yet Llanos had, at that point, an audience of half a million people watching him.

Llanos, 26, had, without really trying or particularly meaning to, usurped every news outlet on the planet. Messi’s first interview after leaving F.C. Barcelona for Paris St.-Germain would not be with a television network or a major newspaper. It would instead go out exclusively on Llanos’s Twitch channel.

Over the last couple of years, Llanos has interviewed a succession of soccer’s biggest names, from Sergio Ramos to Paulo Dybala. He now counts some stars, like Sergio Agüero, as friends, and others, like Gerard Piqué, as business partners.

Players who habitually distrust the news media have been happy to spend as much as a couple of hours talking to Llanos on Twitch, the Amazon-owned livestreaming service. That is turning him into a breakout star of the internet age in Spain and, at times, occasionally invoking the wrath of journalists from more traditional outlets who envy the access he enjoys and disdain his lack of training. 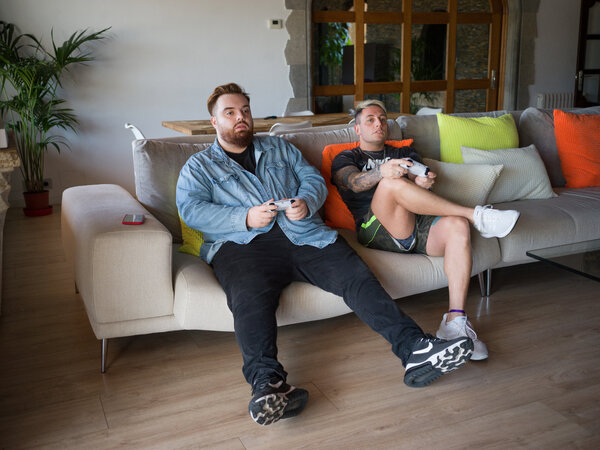 The interview with Messi was, by some distance, the most high-profile moment of his relatively brief career. It was also, from a journalistic perspective, a little unorthodox. Llanos was nervous. When he watched the video later, he saw that he had been threading a pen between his fingers throughout his talk with Messi without noticing. “It was a bit like having vertigo,” he said.

Operating under the same strictures as everyone else, Llanos asked Messi if he had “eaten a lot” at the farewell dinner he had held for some of his closest friends in Barcelona a couple of days earlier. “Did I behave myself?” Llanos asked. Messi assured him that he had.

Llanos asked Messi only one soccer question, on the appeal of playing alongside Neymar and Kylian Mbappé, and so there was only one soccer answer, delivered in that dampening monotone players adopt whenever their sport is brought up. Mostly, the entire exchange was light and cordial, its intimacy only undercut by Llanos’s referring to the world’s best soccer player as “Messi” — not Lionel, not Leo, not Señor Messi, but the word on the back of his jersey, somewhere between an honorific and a schoolyard nickname — throughout.

That was exactly what Llanos had promised. “I am not going to ask him about Mauricio Pochettino’s tactics,” he had explained on his livestream just before Messi arrived. Llanos is not a journalist. He does not pretend to be a journalist. He is not trying to become a journalist. And that is what allowed him to get the exclusive every journalist wanted.

Llanos has been a streamer since before the term existed. At age 15, he and some friends from Bilbao, his hometown in Spain, set up a YouTube channel, filming themselves playing the video game Call Of Duty. “It was growing, but it wasn’t so normal at the time to see gaming on YouTube,” Llanos said.

They built a small but impressive audience — some videos attracted 20,000 viewers, he said — and earned a little money. “It was 30 euros a month, something like that,” he said. “It wasn’t money to live on, just to buy a little bit of equipment. It was a hobby, a pastime. It wasn’t a business.”

He was still deciding “what to do with my life” when he noticed an advertisement for a casting call from the Liga de Videojuegos Profesional (L.V.P.), Spain’s esports league, looking for announcers. He and Cortés applied and, in August 2014, got the job.

The pay was initially “quite low,” Llanos said, but he enjoyed the start-up energy not only of the company, but also the scene. “There was a lot of love,” he said. As the league grew, so did his profile. “There were more and more events, collaborations with brands, athletes,” he said. He moved to Barcelona. He did an ad for the release of the PlayStation 5.

But Llanos turned into a more mainstream cultural phenomenon only last year. He had left the L.V.P. just before the coronavirus pandemic — “there was a bit of a generational shift, and I felt saturated” — and dedicated himself to creating content for an esports team, G2 eSports, streamed on his own Twitch channel. Cortés, Nanclares and several other creators joined him.

Everything changed with the pandemic. As Spain went into lockdown, its population cloistered at home, Llanos saw his viewership figures explode: His Twitch channel currently commands 7.8 million followers, making him one of the 10 most followed creators on the platform. His YouTube account attracts a similar audience.

After he announced plans for a virtual version of La Liga — filling the void left by the suspended league — it emerged that a number of high-profile players already ranked among his fans, including Sergio Reguilón, the Tottenham defender; Borja Iglesias, now of Real Betis; and Messi’s new teammate at P.S.G., Achraf Hakimi.

“There are a lot of players that play video games in their free time,” Llanos said. “And because they could not go out, because in the first lockdown they did not have training or games, they had more time to dedicate to it.”

The most significant guest, though, may have been Aymeric Laporte, the Manchester City and Spain defender. “Laporte was already following me,” Llanos said. “We agreed to play Fortnite and stream it, and while we were playing he told me that he had messaged Sergio Agüero and invited him to play, and asked if it would be OK if he joined us. It was his first time on Twitch.”

Others have followed. Earlier this year, Llanos launched a weekly, longform interview segment on his channel: Charlando Tranquilamente, or Chatting Quietly. The likes of Dybala, the Juventus forward, Ramos, the former Real Madrid captain, and Agüero himself have all appeared as guests.

That a 26-year-old streamer could attract names of that magnitude sparked criticism from more traditional news media outlets.

“Who is Ibai? I called Agüero for an interview, but Ibai beats me, and if Ibai beats me, I have to retire,” the Argentine announcer Gustavo López said. “They talk to the powerful, and disregard those of us who are paid in pesos.” Others derided Llanos as an “entertainer,” rather than a journalist.

To Llanos, though, that is kind of the point. “Maybe I am the sort of person they like,” he said of players. “A little bit different.” He does not attempt to pry into their personal lives. He does not try to ask them challenging questions about what, for them, is often simply their work. Instead, he tries to talk to them as informally as possible, while doing something — playing video games — that they enjoy.

The players’ motivation is perhaps a little more calculating than that. “Twitch is the Generation Z platform,” said Julian Aquilina, a broadcasting specialist at the media research firm Enders Analysis. “It skews very young, and quite male. It is quite a different audience to traditional broadcasters.” Llanos offers a precious route into that audience: His interview with Dybala, for example, attracted more than 100,000 live, largely teenage viewers.

That soccer’s biggest stars find it a more appealing prospect than a more formal interview, though, is not in doubt. “Twitch has much more of a community vibe,” Aquilina said. “It’s much more interactive.” To at least one of Llanos’s guests, the allure was that talking to Llanos did not feel like an interview at all. There was no camera, no sound equipment, no call-and-response of questions, no defined structure. The players feel safe talking to someone who seems like a friend.

That, ultimately, has been the secret to his success. He and Agüero have grown close enough that the striker invited Llanos, surreptitiously, to Messi’s farewell dinner in Barcelona. The encounter earned Llanos his invitation to Paris, to Messi’s presentation, and to his world exclusive.

At the table that night, too, was another player now firmly in Llanos’s orbit: Gerard Piqué. The Barcelona defender was the first guest on his talk show segment; he is now, in effect, Llanos’s business partner.

In August, the two men bought an e-sports team. This was after Piqué’s investment vehicle, Kosmos, bought the Spanish streaming rights to this summer’s Copa América, and broadcast it on Llanos’s Twitch channel. It did the same for Messi’s first game as a P.S.G. player last month.

That match also was shown on Telecinco, a Spanish broadcast network. About 6.7 million people watched at least a little of the game on television; Llanos attracted roughly 2 million viewers (though he also has a large following in Latin America, so the figures are not immediately comparable).

It is an approach, Aquilina said, that may become more common. “Twitch is becoming a broadcaster,” he said. “Amazon has done that with some N.F.L. games, putting them on Twitch as well as Prime. If you have the rights to something, you want it distributed across platforms: You can sell the broadcast rights but still have an online presence.”

Llanos was not thinking about that, he said, that day in Paris. He was, instead, simultaneously dealing with the nerves from “the most pressure I have ever felt,” and marveling a little at “being able to do this with two of my best friends.” The combination was enough to give him that dizzying feeling of vertigo. He, and the revolution he represents, are not going anywhere, though. He will get used to the height.

Australian Open invaded by colony of beetles as desperate officials sweep, vacuum and release HAWK to get rid of bugs