Home » Sport » Yasiel Puig, traded to Indians, gets in brawl in final game with Reds

Yasiel Puig played his final game in Cincinnati as a Red on Tuesday night and went out fighting.

Puig got ejected after a bench-clearing brawl broke out in the ninth inning of Tuesday night’s game between the Reds and the Pittsburgh Pirates.

Social media was already carrying reports that Puig had been traded to the Cleveland Indians as part of a three-team swap also involving the San Diego Padres.

None of the teams had yet announced the trade while Tuesday night’s MLB games were still underway.

Cleveland reportedly acquired Puig, while Cincinnati got Indians pitcher Trevor Bauer, who had placed himself in the club’s doghouse by hurling a baseball over the center-field fence after being removed from his most recent appearance. 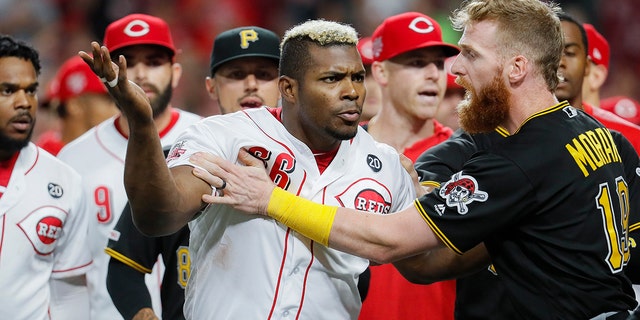 The Padres reportedly acquired Cincinnati prospect Taylor Trammell and send outfielder Franmil Reyes and pitcher Logan Allen to the Indians, according to ESPN.

As for the brawl, tensions between the Reds and Pirates began running high after the Pirates threw a pitch near the head of Cincinnati’s Derek Dietrich early in the game, USA Today reported.

In the ninth inning, Reds reliever Amir Garrett got involved in a shouting match with the Pirates dugout – and then charged toward the opposing bench, sparking the melee.

Garrett and Puig were among eight ejections, the report said.