Playing hero came at a potentially fatal cost for several members of the 126 on Monday as 9-1-1: Lone Star: The Ice Storm raged into its second week.

Let’s start with poor T.K., who began the hour by rescuing that little boy from underneath the ice… and ended it in a hospital bed, facing what could be (but will definitely not be) his untimely death. Even before Tommy noticed that T.K. disappeared in the blizzard, it was clear that his personal victory would be short-lived; there was no way he could be that wet and that cold without triggering a bout of hypothermia.

That said, we weren’t expecting Tommy and Nancy to find their fallen comrade naked and shivering in a snowy ditch. Never mind that he also tried to hit them with a stick and suddenly started speaking Hebrew. These were all symptoms of T.K.’s dangerous condition, which ultimately sent him to the ICU.

“Typical T.K., it’s the first time he wants to talk to me in months and he’s in the ICU,” Carlos remarked upon his arrival. But his cavalier attitude quickly shifted to genuine concern when Nancy revealed that she asked Carlos to come on T.K.’s behalf. “It’s not good,” she said with tears in her eyes. And their fears only increased when Tommy emerged from her meeting with T.K.’s doctor: “We need to find his father.” 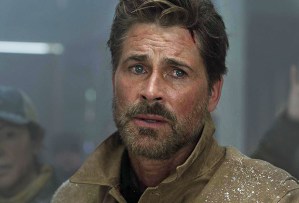 * For someone who’s tired of being a hero, Owen has basically been thrust into his most heroic situation yet. Not only did he drag in a stranger from the snow, but he also cauterized the guy’s wound and successfully radioed for help with an old ham radio. Sadie was getting all hot and bothered watching Owen do his thing, and you know what? Same. Unfortunately, Owen’s patient got spooked and bolted, forcing Owen back out into the snow. After passing out, Owen was taken in by a group of people who were on the run from their coyote captors, one of whom just happened to be the guy whose life he saved in the cabin. (Oops!) To make matters worse, the episode ended with that very same coyote arriving on the scene, gun in hand.

* On a happier note, Paul successfully rescued that teenage girl from the ice palace this week. In order to stay awake and warm, they focused on things that make them angry, an exercise that elicited some extremely strong emotions from Paul about the 126 getting shut down and disbanded.