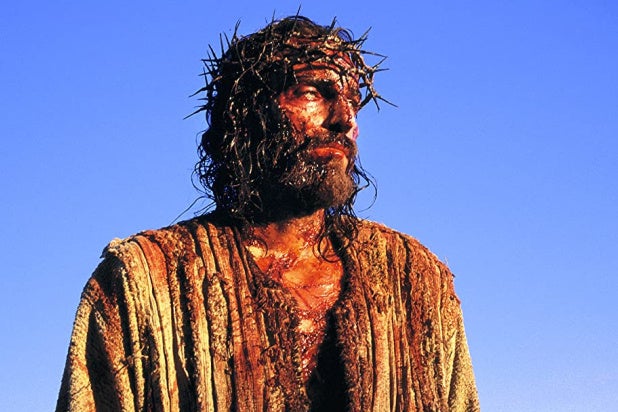 Actor Jim Caviezel, who used to be famous for starring in movies like “The Count of Monte Cristo” and “The Passion of the Christ,” joined an all-star lineup of far-right conspiracy theorists at a COVID-19 conspiracy “health and freedom” conference in Oklahoma on Friday night. And Caviezel spent at least part of his segment endorsing the false QAnon conspiracy theory regarding “the adrenochroming of children.”

This made-up theory states that rich people torture children so they can harvest their adrenaline, which the theory says has some unspecified rejuvenation properties. This nonsense, which is more or less just the plot of Pixar’s “Monsters, Inc.” has been at the bedrock of the QAnon #SaveTheChildren movement, which is more concerned with fake stories like this than with actually saving children who are the victims of human trafficking.

Caviezel joined quite the roster of right-wing conspiracy fans at the conference, which included names like Michael Flynn, Lin Wood, Sidney Powell and the My Pillow Guy. Mike Lindell, among many other far-right figures.

Caviezel was supposed to appear with a man named Tim Ballard, founder of the anti-trafficking organization Operation Underground Railroad. Ballard has been a sort of hero figure for QAnon adherents, and Cavezel played him in an obscure movie. Caviezel said Ballard skipped the conference because “he’s down there saving children as we speak.” Though he didn’t elaborate on that at all.

At one point, the moderator asked Caviezel to explain this untrue conspiracy theory to attendees at the conference who might not know about it. Though he needn’t have bothered — when the host asked the crowd to raise their hands if they knew about “adrenochroming,” pretty much everyone in the crowd did so.

Here’s how Cavezel explained it.

“Essentially, you have adrenaline in your body,” Caveizel explained. “And when you are scared,  you produce adrenaline. If you’re an athlete, you get in the fourth quarter, you have adrenaline that comes out of you. If a child knows he’s going to die, his body will secrete this adrenaline. And they have a lot of terms that they use that he [Ballard] takes me through, but it’s the worst horror I’ve ever seen. The screaming alone, even if I never, ever, ever saw it, it’s beyond — and these people that do it, umm, there will be no mercy for them.”

Cavezel then claimed that this Tim Ballard movie that he’s in “is on a level of Academy Award level.” That is a direct and accurate quote, not a typo.

The conference is scheduled to conclude on Saturday night with an event titled “It’s Time to Burn Those Masks,” during which attendees will, uh, burn face masks instead of using them to help prevent the spread of COVID-19. The pandemic still kills thousands of Americans each week and is seeing a new surge in cases in the U.S.

Game of Thrones season 8, episode 1 streaming: How to watch online

Get This Awesome Merch for Game of Thrones Season 8