Home » Alex Jones halts The One Show as ‘wind’ joke leaves her in hysterics: ‘So unprofessional!’

The One Show: Alex Jones gets the giggles about 'wind'

On Thursday evening, Alex Jones and Ronan Keating welcomed Richard Osman and EastEnders’ Adam Woodyatt onto the BBC programme. But away from the celebrity guests, they also enlisted the help of Gardeners’ World star Adam Frost to give a ‘One Big Thank You’ to Duncan Borthwick, a member of the public who’s been pulling out the stops to raise money in his local village. However, things quickly went off the rails of The One Show when Alex stumbled on her words when introducing Duncan.

Alex and Ronan revealed Duncan has been going the extra mile to help his community by holding a number of fundraisers to help his neighbours who had been furloughed and helping local children needing entertainment in the midst of the pandemic.

Duncan had raised thousands of pounds for the residents of his town, all of whom shared clips with The One Show explaining why he was a man worthy of the show’s ‘One Big Thank You’.

And as a fan of Gardeners’ World, Adam was on hand to surprise Duncan with a treat – but not before Alex sent the show on a downwards spiral in the studio.

After hearing from those close to Duncan, the cameras return to Alex in the studio who began: “Well, his friends know him well as you’ll see now.” 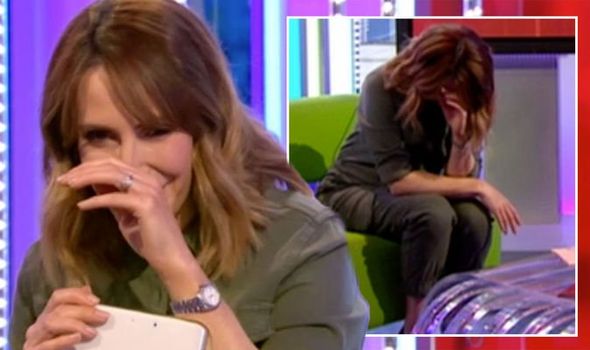 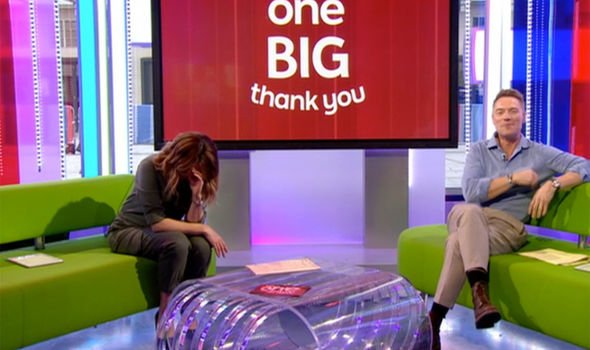 She added: “Now, he got wind – we got wind, sorry, that he’s a massive Gardeners’ World fan.

“So who better -“ she tried to continue before cracking up at her slip of the tongue.

“Sorry, that’s really tickled me,” Alex said as she keeled over in laughter, unable to read the rest of the script from the autocue.

As laughter erupted from The One Show crew as well, it was left to Ronan to jump in as he finished her speech: “Who better to surprise him than one of the presenters.

The One Show surprises guest in Gardeners’ World prank 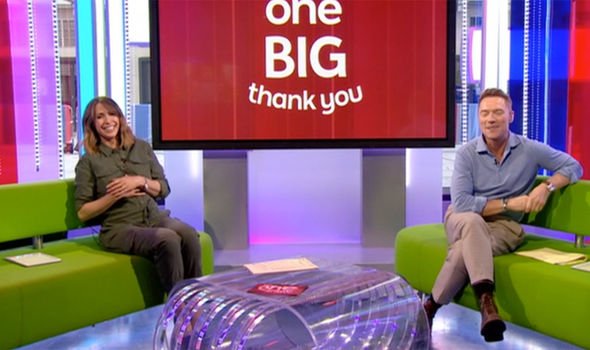 “Here’s what happened when we gave him a huge surprise,” Ronan added, with Alex still in fits of giggles.

The One Show viewers then saw how Adam surprised Duncan in front of all his family and friends, pranking him into thinking he was taking part in a live episode of the gardening show.

Instead, Adam thanked Duncan for all his fundraising efforts and had a number of other famous faces on hand to show their gratitude.

Girls Aloud’s Kimberley Walsh and Nadine Coyle – members of his favourite pop band – both appeared on a big screen to thank Duncan, leaving him in tears.

As the cameras returned to the studio, Alex had just about regained her composure, but it wasn’t the last time the mix-up was going to be brought up.

Before closing the show, Ronan replayed the clip of Alex derailing proceedings with her laughter.

“Have a look at this,” he said as the clip replayed on-screen, leaving Alex mortified.

“That is so unprofessional, I’m so sorry,” Alex said as she began to laugh again. “And so childish!”

“I love it,” Ronan teased before reading aloud viewers’ comment who also found it funny.

And one of the comments had Alex in stitches again, when a viewer tweeted the show to say her dog also had wind.

“Honestly, it’s pathetic,” Alex said as she tried to compose herself. “I mean what’s going on!?”

“I’m a grown woman, apparently,” she joked before the two just about managed to bring the show too close.

The One Show continues weekdays at 7pm on BBC One.

Is Glastonbury Festival cancelled over the coronavirus pandemic and can I get a refund? – The Sun