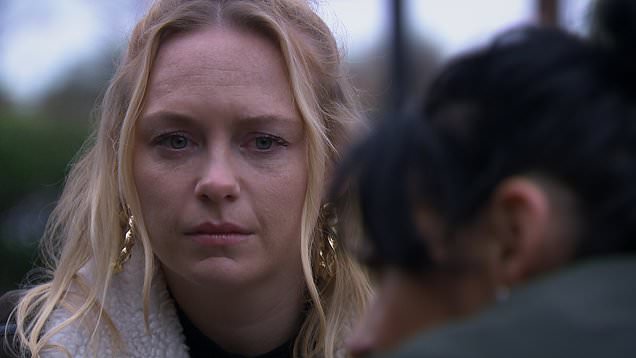 Amy Wyatt (Natalie Ann Jamieson) was left devastated in Emmerdale tonight (Wednesday January 18) as her visit to see son Kyle (Huey Quinn) was cancelled at the last minute, following an incident at the secure children’s home where he is currently living.

Cain Dingle (Jeff Hordley), who had been informed he was not allowed to visit his son himself, arrived at Amy’s house to take her to the visit, only to be kept waiting while she answered the phone.

After demanding that she hurry up and not waste her opportunity to visit their son, he was told to go easy on her by a protective Matty (Ash Palmisciano) and Victoria (Isabel Hodgins).

Matty insisted that he could take her if Cain was just going to have a go, an idea which was quickly shut down, as the car park was as close as he would be able to get to Kyle before the plea hearing.

Having been present for Al’s shooting, the crime which Kyle is facing jail time for, and the subsequent cover up, Cain is a key witness in the case, meaning that he is allowed no contact with his son.

Unbeknown to him, the phone call causing the delay was actually from the secure unit they were supposed to be heading to.

A disappointed Amy broke the news that there had been an incident, and, while it wasn’t clear if Kyle had actually been involved, he wasn’t allowed any visitors that day due to the pending investigation.

Cain took the news badly, later lashing out at Moira (Natalie J Robb) when she spilt a drink over Isaac’s drawing for his brother.

A furious Moira pointed out that, with Cain this angry now, if Kyle doesn’t get bail then their lives will be made far more difficult by Cain’s temper.

With the hearing imminent, will things go their way, or will everyone be forced to face the wrath of Cain?

SAG Awards Predictions: Stakes Are High in the Actress Categories