“Animal Crackers” is what might happen if a desperate animator used a monkey’s paw to wish for a career in the movies. The absurd path of this silly and rather enjoyable animated movie is all the more startling because it turned out kind of…decent. It all started in 2010 when screenwriter and eventual co-director Scott Christian Sava wrote an innocuous family comedy about a man who saves his family’s circus with the help of some magic cookies that can turn people into animals. The journey to get it made was almost as strange: “Animal Crackers” scored investment from Harvey Weinstein three years later, a flotilla of Chinese firms agreed to put up the rest of the money, “Mulan” co-director Tony Bancroft came aboard to help steer the ship, and “Despicable Me” character designer Carter Goodrich was hired to help with the animation. With those pieces in play, a rather astonishing variety of famous voices came aboard to help bring the story to life.

John Krasinski — at that point still two years shy of stepping into the Captain America machine and transforming from Jim Halpert to Jack Ryan — signed on to play Owen Huntington, a blue-haired yuppie who dreamed of joining his uncles’ circus before life got in the way, the big top collapsed, and he settled for a job at his father-in-law’s dog biscuit factory (Emily Blunt naturally agreed to voice Owen’s wife and Wallace Shawn took a gig as her old-fashioned dad). Ian McKellan was cast as Owen’s vain and scheming circus MC Horatio P. Huntington — the actor seizing on a role that would allow him to split the difference between Gandalf and Liberace — while Danny DeVito agreed to be a hot-dog addicted clown named Chesterfield, and Gilbert Gottfried added to this Avengers-worthy assemblage of comic talent as the diminutive henchman Mario Zucchini, who speaks in the third person and insists that Horatio actually works for him.

Throw in Harvey Fierstein as an obese “gypsy” woman (the rare part that’s potentially offensive in at least three different ways), Raven-Symoné as the Ferran Adrià of dog food, and Sylvester Stallone as the movie’s very own Groot (his trisyllabic performance as the iron-headed daredevil Bullet-Man has big “someone just told Sly how much Vin Diesel made on “Guardians of the Galaxy” energy) and you have… well, probably not much left in the film’s $17 million budget. Judging by the finished product, Sava left little of that to the animation, and let original songwriters Toad the Wet Sprocket, Huey Lewis and the News, and Michael Bublé fight to the death for the last few bucks. That’s right: “Animal Crackers” is something of a musical. Imagine the spirit of “The Greatest Showman” with the graphics of “Mario Kart 64” and you’ll be on the right track.

But if “Animal Crackers” is another hideous reminder of how aesthetically catastrophic the rise of computer-generated animation has been for low-budget kids fare (underfunded CGI animation tends to erase the artistry behind it, in the same way that cheap hand-drawn animation tends to reveal it), Sava’s debut is also proof that a decent script, some delightful voicework, and a few choice “Lord of the Rings” references can blend into the kind of charm that money can’t buy. For all of its limitations, the movie is good. Ish. In a world where the likes of “Wonder Park” can open on thousands of screens, there’s no reason “Animal Crackers” shouldn’t have enjoyed a traditional release after its bow at the Annecy International Animated Film Festival in 2017.

Alas, as much of a blessing as it was that Weinstein disassociated from “Animal Crackers” before his downfall, the movie somehow wound up belonging to the one Hollywood exec who might have been even more toxic to its chances: Ryan Kavanaugh of Relativity Media (whose company struggled to hit the planned release date of April 28, 2017 on account of its total financial collapse). If Sava felt optimistic when upstart distributor Serafini Releasing then snapped up the rights, he may have felt less so when Serafini then promptly ceased to exist before it was even deemed worthy of its own Wikipedia page. That was hardly the last time it seemed like “Animal Crackers” would die in confinement, but you get the idea; this movie’s path to release has been like “The Odyssey,” if the epic poetry of Homer’s classic was replaced by Stallone shouting “Bullet-Man!” in 10 different ways.

And much like “The Odyssey,” the long and bloodsoaked journey of “Animal Crackers” has a reasonably happy ending: Netflix is releasing it in hundreds of territories around the world at a time when kids are desperate for new content.

Still, it would be even easier to appreciate what “Animal Crackers” has to offer if not for the sloppiness of its table-setting. Kids and their parents alike might find themselves confused by the film’s overloaded prologue, which sets the plates spinning for at least three different movies before honing in on the story that Sava actually wants to tell. We begin in the halcyon days of 1962, as Horatio — looking like the pompadoured lovechild of Lupin III and Vanilla Ice — kicks things off with a huge musical number about how great he is, and while the song itself isn’t particularly memorable there’s no denying that McKellan performs it with Barnum-worthy gusto. 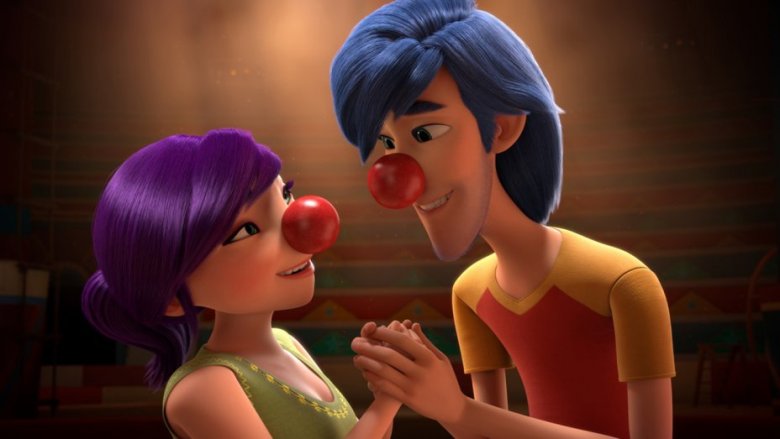 But Horatio is an insecure narcissist, and he burns with jealous rage when his brother Buffalo Bob marries their mutual crush Talia, receives a mysterious wedding gift of some kind, and uses it to open an animal-based circus of his own. Horatio is still bitter when the action picks up a few decades later, and his resentment builds until Bob and Talia die in a fire (but like, a family friendly fire) and the workaday Owen becomes the last hope of preserving the Huntington family’s magical legacy.

The task would seem too great for a corporate drone like Owen, if not for the heirloom he finds at his aunt and uncle’s (family friendly) funeral: An enchanted box of animal crackers that turns you into whatever kind of cookie you eat. Cut to: A madcap and genuinely amusing car chase in which Owen’s wife Zoe tries to outrage the relentless Zucchini while Owen transforms into a hamster and a bear in the backseat of their station wagon (each of the animals bearing his signature blue eyebrows). It’s nothing of the sort you haven’t seen before, but the sheer joy that Owen and Zoe’s daughter Mackenzie displays at watching her dad go full Baloo proves contagious; it’s like a giggling little laughtrack that gives you permission to just surrender to the zaniness of it all.

This isn’t “Coco” or “The Wind Rises”; it’s a movie where Danny DeVito plays a clown who pulls hot dogs out of people’s ears. It’s a movie that has montages instead of character growth, and catchphrases instead of themes (on the one hand, your kids will start shouting “nincompoopy!” in the voice of Wallace Shawn; on the other hand, they’re going to lose their minds when you show them “My Dinner with Andre”). Sava and Bancroft tame the film’s big “none of this really matters” energy into more of a carnival attraction than a big, up to and beyond the Scar-inspired showstopper in the second act where McKellan sings about how “the cookies should have been his” with Shakespearian pathos.

If “Animal Crackers” never quite matches the mania of “Meet the Robinsons,” nor the comic wit of “Cloudy with a Chance of Meetballs,” it still moves so fast that less generic animation might have seemed like a waste. The film may not have much of a message — something about holding onto your inner child and putting your family first, maybe? — but one shot of a chicken driving a motorcycle made me laugh out loud. Now that Studio Ghilbi’s movies are all streaming for anyone whose kids need something to chew on (and/or awe at), it’s easier to appreciate having the likes of “Animal Crackers” on hand as a light snack. Even after sitting on the shelf for half a decade, it still isn’t too stale to enjoy.

“Animal Crackers” will be available to stream on Netflix beginning Friday, July 24.

Robert Pattinson ‘Weirdly Enjoys’ the Prospect of Messing Up ‘The Batman’