The Broadway performances of a U.S. congressman’s wife has become an unlikely talking point in Wisconsin politics.

In her campaign to unseat Republican U.S. Rep. Mike Gallagher by highlighting his background of “wealth and privilege,” Democratic State Rep. Amanda Stuck repeatedly mentions Gallagher’s marriage to a “Broadway star” in a video to the local PBS station.

Stuck continues, “For most of us, Broadway is a street in Green Bay. It isn’t a place in Manhattan, like Mike Gallagher knows.” 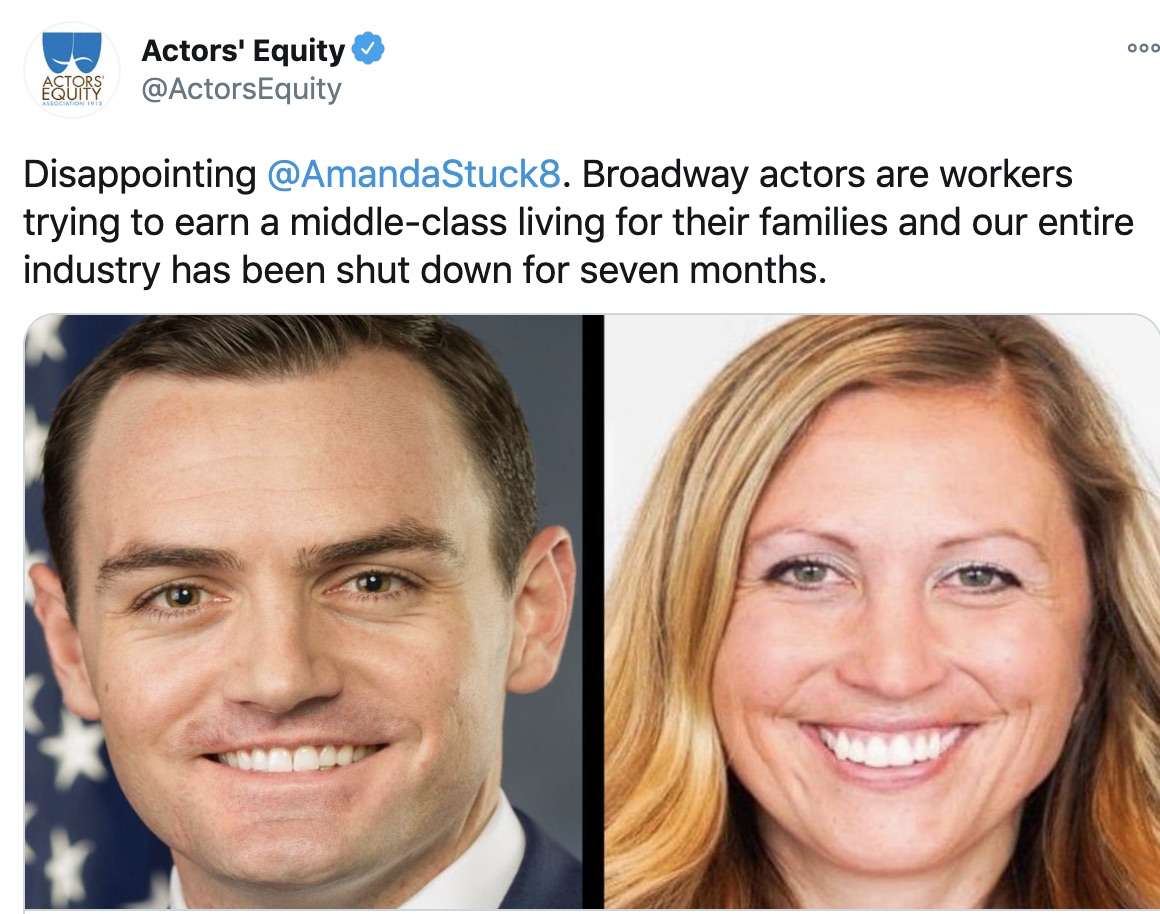 The approach has made headlines in Wisconsin’s 8th Congressional District and even drew a reproach from Actor’s Equity. Last night, the union representing stage actors and stage managers tweeted, “Disappointing @AmandaStuck8. Broadway actors are workers trying to earn a middle-class living for their families and our entire industry has been shut down for seven months.”

All of which leads to the question, Who, exactly, is Anne Gallagher?

Even Broadway-goers with good memories won’t recognize the name, but they might know Anne Horak, the actress’ name before her marriage to Gallagher last year. Under that name, she made her Broadway debut in the ensemble of the 2008 holiday season musical Irving Berlin’s White Christmas. In 2013-14, she understudied, and then took over, the role of Roxie in the long-running Chicago.

Horak Gallagher, a Green Bay native, has a more extensive roster of regional credits, including the Paper Mill Playhouse and the Long Wharf Theatre, and she did the national tours of Chicago and Young Frankenstein. She’s had small roles in TV episodes of Law & Order: SVU, Forever, A Gifted Man and Royal Pains, MTV’s Eye Candy. She appeared as a “Goldigger Dancer” (alongside Amanda Kloots) in Martin Scorsese’s The Irishman last year.

“Amanda Stuck’s attempts to shame me for pursuing my career in theatre is repugnant,” Horak Gallagher told local Wisconsin news outlets. “I had amazing teachers at Notre Dame Academy in Green Bay and worked my tail off to establish a career for myself in Manhattan. Any success I had was a result of hard work and determination. I want my daughter Grace to grow up in a community where women feel empowered to follow their dreams, whether that takes them to Marinette, Milwaukee, or Manhattan.”

'The View,' 'Live With Kelly and Ryan' and 'Tamron Hall' to Tape Without Audiences Due to Coronavirus