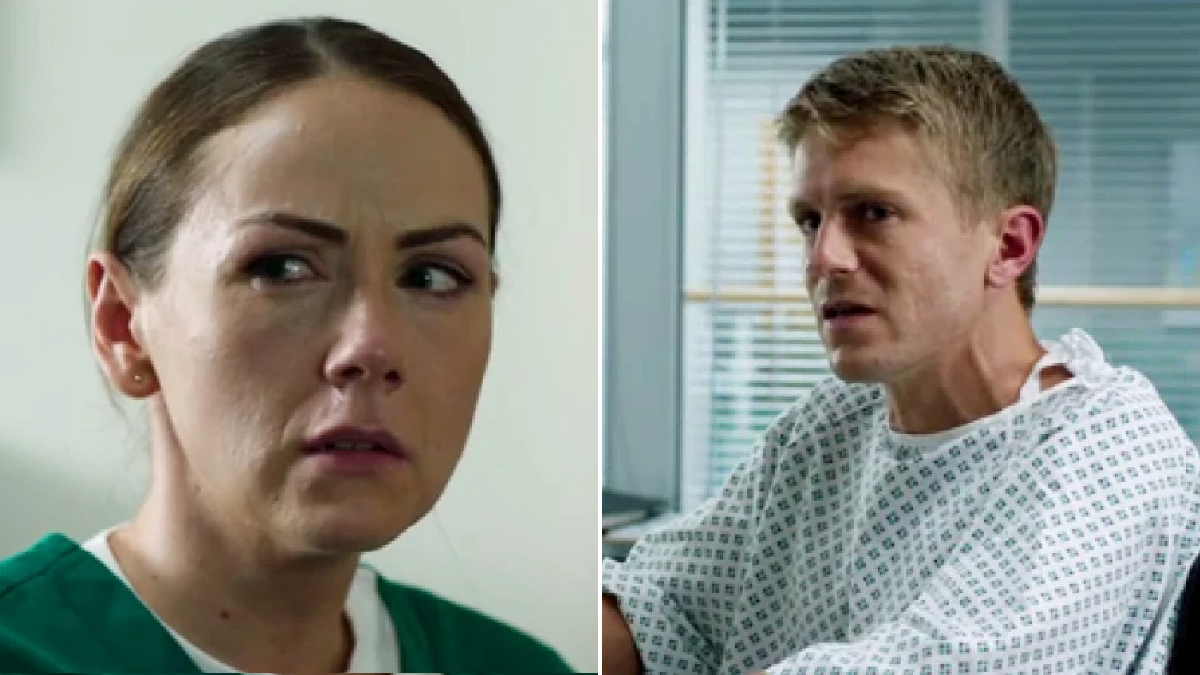 If you’ve fallen out with your spouse or colleague on Casualty you don’t get just to hug and be friends again. You have to go through some major trauma first, so you truly realise what you might have been about to lose.

Jan (Di Botcher) and her wife Ffion (Stirling Gallacher) have been estranged for some months, after Jan lied to Ffion about smuggling drugs into prison for her son Ross. Even Ffion’s diagnosis of breast cancer didn’t bring them together, as the pain of Jan’s betrayal made Ffion feel she was better alone than with a wife who could’t be trusted.

But in tonight’s episode, both women found themselves in the middle of a hostage situation. Jan proved her loyalty by refusing to leave the scene when she had the chance. ‘You’re still my wife,’ she told Ffion, despite Ffion having only just informed her that she’s appointed a divorce lawyer.

The hostage-taker was a man called Dave, who was upset because his son had died after an asthma attack, which Dave blamed on pollution from diesel. The hostage was Dave’s former employer, Tony, who’d covered up an emissions problem in his diesel-related business. Ffion had been wounded trying to tackle Dave and was bleeding from the scars of her recent breast cancer surgery.

Dave allowed Jan to stay and fling painkillers and gauze for Ffion over the perspex barrier (they were on a squash court). When they realised that Dave had lung cancer and was also grieving for the loss of his son, they did their best to be sympathetic and Ffion called off the armed police who were gathering outside. But when Tony lunged for the gun it went off – and for a few moments Ffion thought Jan had been shot.

Back in the safety of the ED, there was a tearful reconciliation for Ffion and Jan as they both realised that their greatest fear had been for each other.

Meanwhile the relationship between Ethan (George Rainsford) and Stevie (Elinor Lawless) is currently set at ‘armed truce.’ Stevie was certain that Ethan would wake up after surgery to save his life following being stabbed by a patient and immediately tell Dylan (William Beck) the stabbing had all been her fault. Her career as Holby’s angriest-looking emergency medic would be over. This was unthinkable, Faith (Kirsty Mitchell) told her, because as well as being permanently furious she’s also a very good doctor.

Luckily, Ethan agreed. ‘I don’t want you to lose your job when I didn’t lose mine, and I know what grief does,’ he told her. ‘Is this the bit where we hold hands and go frolicking through the ED together?’ she asked him.

Sue Haasler is the author of five novels and the official BBC Holby City book, which you can read about here.

Nina and Roy cover up Abi's gun crime in Corrie?

Love Island Runners-Up Cely and Johnny Reunite: 'I've Been Having So Much Fun with My Man'

You Won't Believe How Many Nicholas Sparks Books Have Become Movies