When director Darren Lynn Bousman, the man behind Saws II, III and IV, met with Chris Rock to discuss his next entry in the franchise, he found himself shocked multiple times over: Not only is Rock a fan of the genre — naturally, considering the comedian-turned-serious thespian was thinking of sinking his teeth into horror — but of the Saw franchise, in particular. And his favorite is Saw II.

“I remember the first time I actually got to sit down with him,” Bousman tells ET’s Nischelle Turner, “and he started talking to me about Saw II, I was like, ‘Am I sitting here with Chris Rock talking about one of my movies?’ What’s funny is he actually knew more about it than I did. He would be like, ‘Hey, remember in Saw II when Donnie Wahlberg–,’ and I’d be like, ‘Did I do that?!’ He knew more about it than I did, which was crazy.”

Now, Rock is the face of Spiral, a “rejiggering” of the series billed as From the Book of Saw. He stars as Detective Ezekiel “Zeke” Banks, who along with his rookie partner (Max Minghella), is tasked with investigating a string of murders exacted by a new, Jigsaw-esque serial killer. 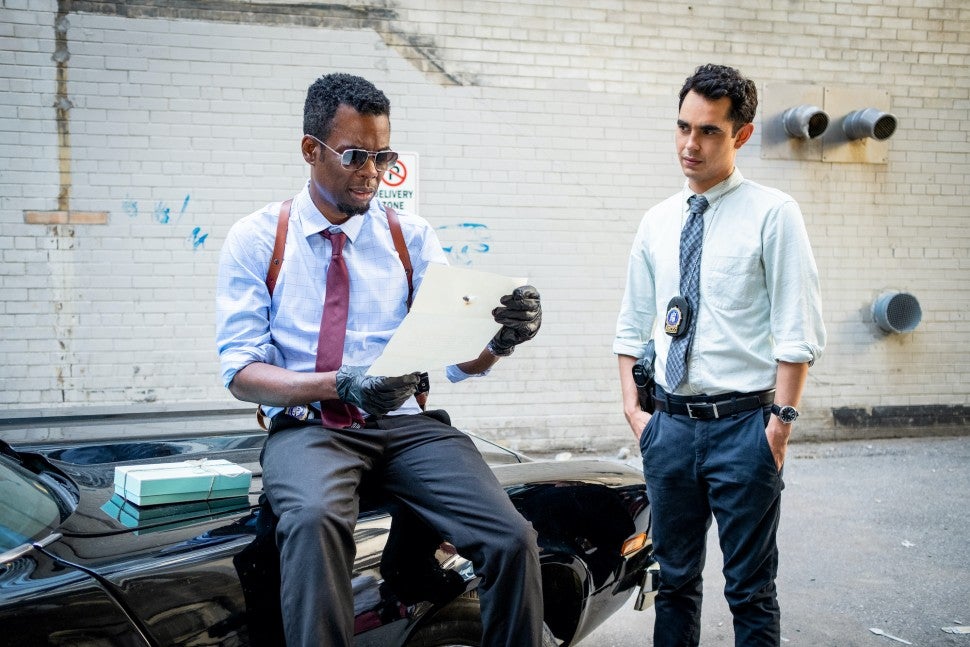 If Bousman didn’t make it immediately clear, the fandom was very much mutual. “I’ve been lucky in my career to work with great actors, but I’ve never worked with anyone as big as Chris Rock or Samuel L. Jackson” — who plays Zeke Banks’ police veteran father — “so for me, coming into this, I felt the pressure. I was coming back for a fourth time after three successful movies and I’m working with two ginormous stars. I felt the same way coming in I did on my first film, Saw II.”

“But I will tell you, after about two or three days on set and I realized how down Chris Rock was and the partner that I had in him, the tension went away,” he explains.

“They’re both just iconic in completely different ways,” Minghella says of his co-stars. “It’s very humbling, but I try not to bring too much anxiety to work. I try to check my nerves at the door, sometimes to better success than others.”

Anyway, there was a bigger star on set to pay reverence to: The traps. Over the years, the Saw movies have concocted truly countless morbid games to ensnare their victims, sick and twisted ways of exacting justice on a victim that are as inventive as they are gruesome. Spiral is no different.

“Traps are a big deal in a Saw movie. For a lot of the cast, this was our first time working on these films, so we had no idea there was so much ceremony around it,” Minghella reveals. “Everyone comes in their best clothes. And the traps are really amazing to see in real life. They’re really elaborate, and a lot of them are totally functional.”

“There’s days where you’re just soaked in blood. You look like Carrie,” Rock adds. “You have to remind yourself it’s not really happening. Even when you’re close, you see the blood and you’re like, ‘Are they killing a stunt man just to get the shot?!’ But they assure you that it’s fake. I hope it’s fake. Yeah, it’s actually scarier there.”

Spiral is only in theaters on May 14.