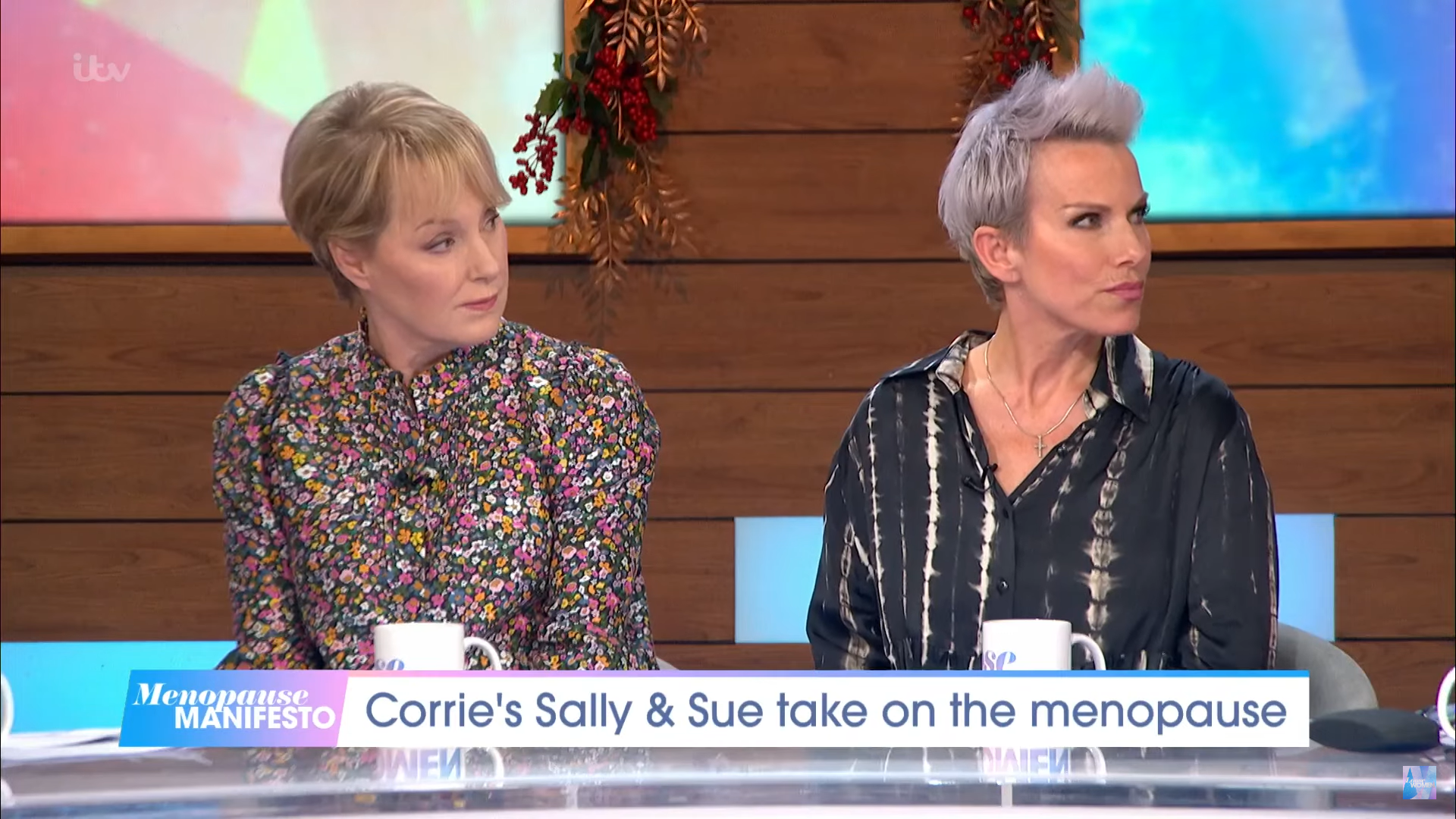 Coronation Street stars Sue Devaney and Sally Dynevor are on a mission to open up a conversation about the menopause in their workplace.

The two friends appeared on ITV’s Loose Women to talk about their experience of the menopause and the monthly meetings they want to set up at Coronation Street so their colleagues can all share their experiences and support each other.

Sally Dynevor, who plays Sally Webster in the show, said the idea started when they were sitting around a table in the green room at work having a cup of tea and talking about their symptoms.

‘We were all similar ages,’ she explained. ‘Actors wear their heart on their sleeve and we started talking about it and everyone had a different experience. It’s not one size fits all.’

Sally and Sue (who plays Debbie Webster) decided to set up a WhatsApp group, and hope this will lead to a monthly meeting to chat about what they’re going through.

Sue was very candid about her own experience, telling the panel and studio audience that she had a ‘shocking time.’

‘You know the list you get? I had all the symptoms,’ she shared. ‘I don’t do things by halves.’ The worst part for Sue was not knowing what was happening to her.

‘I’ve always had low levels of anxiety and have always managed it through exercise or whatever but I had no idea what it was,’ she said. ‘What I understand now is perimenopause is totally different from menopause. I lost my mind, I really did. I‘ve found it again, but now with menopause I lost my body!’

Perimenopause is the transitional stage before the last period, and is characterised by hormonal fluctuations which can cause physical symptoms such as hot flushes and the anxiety and depression that Sue described.

‘I had a washing machine brain and had the same thoughts going round and round over and over. I wasn’t well but I didn’t know how to treat it,’ Sue continued, saying it got to the point where she couldn’t work. She went to three different doctors and psychiatrists who gave her anti-anxiety and sleeping medication, but this was nine years ago before there were the conversations around menopause that we have today and nobody suggested that her symptoms might be being caused by hormones.

Sally experience was different as treatment for breast cancer when she was 46 meant she couldn’t take HRT and she dealt with her menopause symptoms with diet and exercise.

The Loose Women panel were interested in how the discussion in the Coronation Street green room started up, with Janet Street-Porter wondering if it was a difficult conversation to have in what can be a male-dominated profession.

‘They’re all clued up on it,’ Sue said of her male colleagues. Meanwhile the two women are determined that any of their co-workers going through the menopause won’t have to feel isolated like Sue did.

‘When you’re working you’re frightened you think you’re not good at your job any more and you think you can’t show it at work, and you can,’ she insisted. ‘Menopause is our favourite subject!’

The 'Below Deck' Season 8 Trailer Is Here! (Exclusive)