“Dopesick” announces itself right off the bat. In a dark room, his face half cloaked in shadow and standing next to a throne-like chair he’ll eventually inherit, Richard Sackler (Michael Stuhlbarg) whispers his diabolical plan to a small group of powerful men. Soon, we’ll learn the squinting skeptics clad in bow ties and ascots are Richard’s relatives, all of whom “work” for the family pharmaceutical company, Purdue Pharma, and all of whom stand to profit immensely if his plan to “redefine the nature of pain” comes to fruition.

Knowing that “Dopesick” is based on a true story means also knowing that Richard’s proposal to end an “epidemic of suffering” means starting an actual epidemic of opioid addiction, but even viewers entering Hulu’s limited series with only a tertiary knowledge of our national health emergency will recognize the telltale signs of villainy afoot. The Sacklers are so quickly and glaringly framed as evildoers that they may as well have James Bond tied to a chair in the basement. Through this scene and its immediate successors, writer and showrunner Danny Strong, along with director Barry Levinson, aren’t setting up a nuanced tale where good intentions go awry; they’re telling a story where bad men do bad things for one simple reason — money — while everyone else pays the price.

The Sacklers certainly earn their blunt characterization (not everyone has a section on their Wiki page titled “Reputation Laundering”), but “Dopesick” can’t build from its early efficiency. Over eight time-skipping episodes, Richard’s one-note baddie gets gobs of unnecessary screen time — you have to respect a series that refuses to indulge in humanizing a truly wretched individual, but why make him a consistent focus if you’re never going to flesh out his immorality? — and most of its main characters end up feeling just as simplistic. Conventionality leads to bloat, which dulls the clear passion driving “Dopesick,” and as the all-star cast struggles to make repetitious tragedies feel relevant, the series’ exhaustive approach to chronicling the start of the opioid crisis grows exhausting.

Strong’s scripts bounce back and forth across decades, using an onscreen dial that spins like a horizontal slot machine until it lands on the appropriate year. Trying to keep events straight is impossible, which wouldn’t be that big of a deal if all that back-and-forth didn’t undermine much of the drama.

Carrying one timeline is Michael Keaton’s small town physician, Dr. Samuel Finnix. The good doctor sees patients for all sorts of ailments and emergencies, be it a bum shoulder or late-night aches. One of those house calls is for Betsy Mallum (Kaitlyn Dever), a young woman proud to be working in the mines, until an errant co-worker knocks her into a machine and messes up her back. Unlucky for her, Dr. Finnix had just shared a bucket of KFC chicken with Billy the Pharma rep (Will Poulter), and while bonding over a shared love of fishing, the salesman-for-hire sold the doc on a new wonder-drug called OxyContin.

“I would never prescribe a narcotic for moderate pain,” Dr. Finnix tells Billy, and you can almost see a thought bubble emerge from the young lad’s brain: “Famous last words.” After being given a free sample bottle and pumped full of promises that this narcotic is non-addictive, the doctor hands those pills to Betsy, who’s desperate to get back to work because her job won’t allow the recommended time off. So begins a vicious cycle: Betsy feels better, her back heals, but her mind is hooked on the pills. When she takes more, she feels better, but even when she realizes her problem, the dependency is too strong to stop. Relapse. Recover. Repeat. 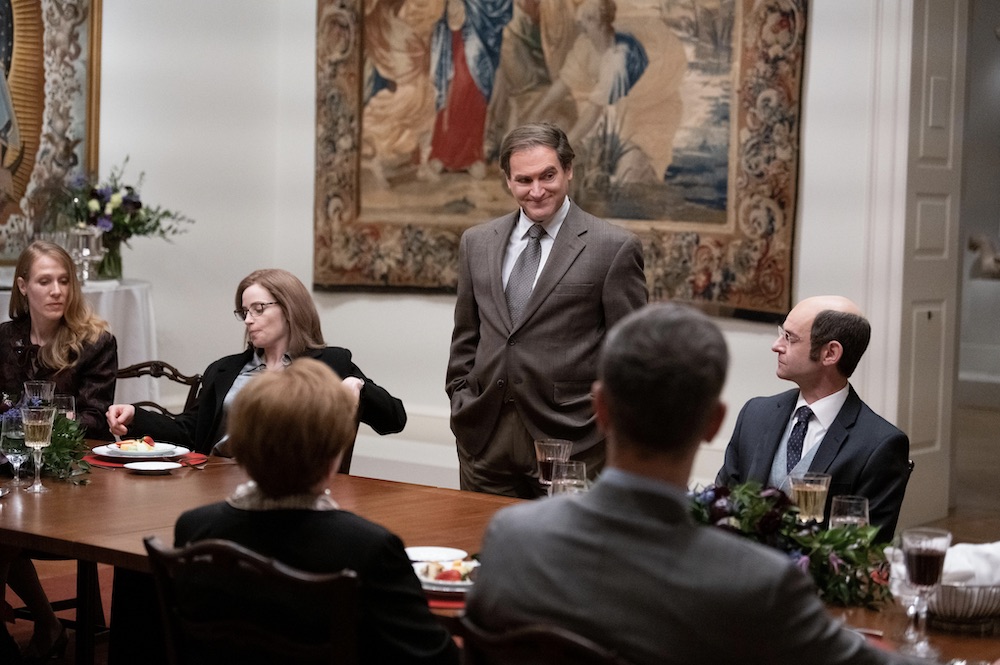 Skipping ahead about 10 years, two assistant district attorneys notice the debilitating effects opioids have had on their Virginia community and open an investigation into Purdue Pharma. Rick Mountcastle (Peter Sarsgaard) and Randy Ramseyer (John Hoogenakker) are underfunded, undermanned, and facing roadblock after roadblock before their work even formally starts, but hey, these good ol’ boys from down yonder (they love using their mountain-people accents to play dumb) aren’t about to be put off by paperwork, pessimism, or, least of all, deep-pocketed bullies. Heck (they prefer if you don’t swear), these two aren’t even discouraged when they talk to a DEA agent (Rosario Dawson) who already tried and failed to hold the Sackler family business accountable.

DEA Agent Bridget Meyer (no relation) meets Rick & Randy (no relation) sometime in 2002, but the majority of her arc takes place in the late ’90s, after we find out her marriage fell apart and career stalled following a dogged investigation into Purdue. Does this undercut any tension in scenes with her future ex-husband (Raúl Esparza), as they flirt, date, and move-in together? You bet! Does it make each one of those scenes exponentially sadder? Yup! Could such scenes have been beneficial to the series if the timelines weren’t so jumbled? Maybe, maybe not. On the one hand, they certainly don’t help “Dopesick” as it plays now; not only do we know where her story is going, but Bridget’s personal arc is trite and predictable. The double-edged sexism she deals with as the highest-ranking woman at the DEA is more compelling, but only half-explored, in part because a good chunk of her screentime is devoted to her romantic life, out of some weird, outdated obligation.

Where any lighthearted scenes could’ve helped is in breaking up the dour atmosphere omnipresent throughout the seven episodes screened for critics. “Dopesick” shouldn’t be an easy watch; this crisis is serious, some of these people are real, and the ramifications will be felt for years to come. But Strong and his producing team lean heavily into each aggravation and calamity, without the spoonful of sugar needed to keep audiences coming back week to week. It doesn’t help that by the end of the first episode, it feels like you fully understand the problem and get where every individual plot is going. (No matter which character took point, this would’ve been better as a movie.) Committed turns from Keaton (always an excellent everyman) and Dever (who goes through the wringer) only get you so far, as Hulu’s valiant endeavor just keeps hammering home a point it made straight from the jump.

What time is The Serpent on tonight and how many episodes are there? – The Sun

Fred and Rose West: The Real Story with Trevor McDonald – What time is it on TV, who were the serial couple and how many victims were murdered?