There were plenty of treats — and only tricks of the intentionally choreographed variety — in store during Dancing With the Stars‘ Halloween episode on Monday.

Of course, the biggest fright for the Season 30 contestants likely came last week, when Spice Girls alum Mel C was unexpectedly eliminated. But the fear of an untimely exit seemed to work in many couples’ favor on Monday, with season-best performances and perfect scores popping up like that hand at the end of Carrie.

The Miz and pro Witney Carson (Paso Doble inspired by Hellraiser): All told, I think this may have been The Miz’s strongest performance, and I was pleasantly surprised by the restraint he demonstrated in a style that can easily go off the “We’re supposed to be dramatic!” rails. That said, the judges’ assumption that The Miz was acting purposefully stiff as a way of embodying Pinhead, and not because he actually was dancing stiffly, seemed a teensy bit too generous to me. Judges’ Score: 34/40

Kenya Moore and pro Brandon Armstrong (Argentine Tango inspired by Arachnophobia): Hel-lo, Kenya’s legs! It’s a shame that Kenya still doesn’t look totally comfortable on the dance floor, because her lines and dynamics during performances are really excellent. But especially in this Argentine tango, Kenya appeared lost in her own thoughts, looking to Brandon for cues more than should probably happen after six weeks of competition. Judges’ Score: 32/40

JoJo Siwa and pro Jenna Johnson (Jazz inspired by It): For those that saw the 2017 It remake, you remember that scene where Pennywise dances in the most terrifying way possible, gleefully bouncing up one leg at a time with a chilling expression on his face? (Watch it here, if ya dare.) JoJo managed to capture the essence of Pennywise’s haunting performance, bringing an elasticity and energy to her moves without sacrificing her technique. Paired with a creepy “Anything Goes” remix as JoJo and Jenna’s soundtrack, I think this routine can only be described as delightfully deranged. Judges’ Score: 40/40

Cody Rigsby and pro Cheryl Burke (Cha-Cha inspired by American Psycho): Finally! Finally! Finallyyy! This cha-cha may not have been tens-across-the-board levels of perfect, but it was certainly the breakthrough I’ve been hoping Cody would have. He embraced the performance’s sultry-creepy vibe very well — only smiling in the manic way that Patrick Bateman would, when the routine called for it — and his execution of the choreography was crisp and assertive. Judges’ Score: 36/40

Jimmie Allen and pro Emma Slater (Contemporary inspired by A Quiet Place): Oh, this was lovely. Of all the male celebrities left in the competition, Jimmie is the best at conveying emotion through his movements, and this performance was done with such sensitivity. I do wish there’d been a smidge fewer lifts for Emma, in favor of letting Jimmie showcase his real dance ability without constantly hoisting her, but hey — a sob-inducing number is a sob-inducing number. Judges’ Score: 38/40

Olivia Jade and pro Val Chmerkovskiy (Paso Doble inspired by The Purge): Even more impressive than this paso doble? Olivia and Val’s tap-dance around why, exactly, Olivia might not be connecting with the voting audience. Very smooth evasion all around! Anyway, this paso doble actually was quite good; I only wish Olivia’s facial expressions had been as intense and enthusiastic as Val’s were. Judges’ Score: 36/40

Melora Hardin and pro Artem Chigvintsev (Jive inspired by Cujo, pictured): Sadly, this wasn’t Melora’s best, and it’s unfortunate that one of her weaker performances — Still good! Just weaker! — fell on a night when so many others peaked. Perhaps it was Artem’s choreography or the pace of “Hound Dog,” but this jive felt strangely sluggish, and Melora’s capable of handling something more intricate. Judges’ Score: 34/40 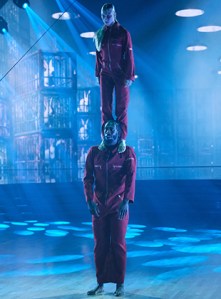 Iman Shumpert and pro Daniella Karagach (Contemporary inspired by Us, pictured): If you’ve followed my Season 30 recaps thus far, you know I think Iman has been a tad overpraised and overscored… but I swear I actually uttered a delighted, “Oh, s—t!” at the start of this routine as Iman loomed menacingly behind Daniella. After struggling to emote in previous performances, Iman completely committed to the wide-eyed, grinning character of this Us number. And though I’d argue Daniella’s jaw-dropping acrobatics are still doing a lot of the heavy lifting, Iman had to move so quickly and confidently in order to raise, catch and fling her around as often as he did here. Judges’ Score: 40/40

Suni Lee and pro Sasha Farber (Tango inspired by The Vampire Diaries): First, and I mean no disrespect to The Vampire Diaries — we love that show here at TVLine! — but couldn’t Dancing With the Stars have thought of a single other horror movie to assign to Suni and Sasha, instead of a TV show? But I digress. I’m so pleased to see Suni getting increasingly comfortable out there, and the sensual confidence she brought to this tango was excellent. Judges’ Score: 36/40

Amanda Kloots and pro Alan Bersten (Argentine Tango inspired by Saw): Amanda wasn’t about to let a ridiculous prosthetic chin stop her from giving one of the night’s best performances. Though Carrie Ann and Len seemed to think Amanda’s legwork was too sharp at times — I mean, she was portraying Jigsaw, but I suppose that’s a rationale reserved for The Miz — Amanda also had perhaps the season’s most intricate Argentine tango choreography to master, and she performed it beautifully. Judges’ Score: 38/40

And now, the results:

Your turn! Who gave your favorite Horror Night performance(s)? Tell us in a comment below!