Mandy Dingle (played by Lisa Riley) has become one of Emmerdale’s most iconic characters, currently in the midst of her second stint on the ITV soap. Since she returned to the village last year, the troublemaker has been caught up in a number of storylines, having had some of her darkest secrets exposed. This evening, she will be featured in a special lockdown episode, alongside Vinny Dingle (Bradley Johnson), where more about her time away from the Dales will be revealed to viewers. However, the new set-up to adhere to social distancing measures might mean the moneymaking opportunist will be undergoing a major change.

After 18 years away, Paddy Kirk’s (Dominic Brunt) ex-wife returned to the village and looked somewhat different to what she did during her first appearance.

With the world having changed somewhat with regards to fashion, the beloved character had bigger hair and bigger eyelashes.

True to the Dingle name and despite her outer appearance being different, Mandy was still a schemer to her core and arrived back with surrogate son Vinny, another big change to her life.

In recent weeks, the pair have been at loggerheads, however, after the youngster was introduced to his birth-father, Paul Ashdale (Reece Dinsdale).

Tonight’s instalment will see the mother and son figures confront their past, with the actors to be seen standing at least two metres away from one another, but there might be another change viewers won’t spot. 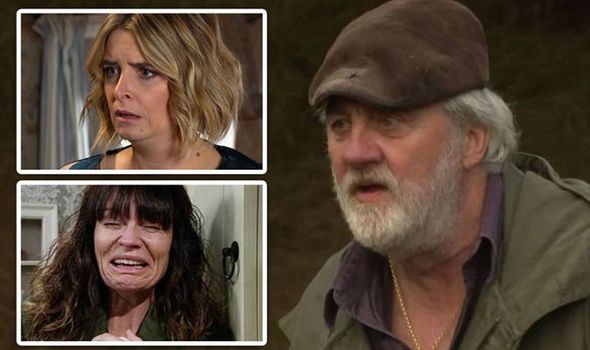 The special lockdown instalments were filmed some weeks before government measures were relaxed, so strict guidelines were followed to ensure everyone’s safety.

This included the actors doing their own hair and make-up in order to have as few people on set as possible.

For this reason, soap star Lisa, 43, has explained for the first time since her character’s return to the village, she might be looking a bit different.

In the lead up to the third two-hander of this block, the Emmerdale star said: “The only lesson I do need to teach myself is putting on eyelashes and fake hairpieces.”

We truly will have to scrap them

“As otherwise for the first time in Mandy Dingle’s history she will not be wearing false eyelashes, as I can’t put them on myself,” Lisa continued.

“For this episode and going forward we are going to be doing our own hair and makeup and as I can’t put on the eyelashes we truly will have to scrap them for this episode.”

It’s not just fake eyelashes which could be a problem either as the actress added: “Also Mandy is renowned for all her fake hair. I can’t put the hairpieces in so they will have to go.

“I have nine named hairpieces. I think the audience will be seeing “Cheryl Cole” a whole lot because we need to simplify everything and I can’t put in the others.”

Lisa continued: “The Emmerdale makeup artists can’t touch me due to social distancing and I can’t put my lashes on myself or my hairpieces in.”

Whereas Mandy might be undergoing a change to her appearance in the coming weeks, the drama on-screen will continue to unravel.

Due to Sam Dingle’s (James Hooton) wife Lydia Hart (Karen Blick) having a 50/50 chance of carrying the Huntington’s Disease gene, she and her surrogate son have had to move out of Wishing Well Cottage.

Instead, they will be living in the village salon during the lockdown period, with the episode playing out the reality of the last few months through the eyes of the characters.

However, the troublemaker is still harbouring a secret about her past and her real connection to Vinny, which is going to be explored in upcoming scenes.

As she and her surrogate son delve into the alcohol supply Mandy had been hoarding, they begin to talk more about her backstory.

In the process, the iconic character will let slip something she has been keeping from the youngster which will have huge repercussions going forward.

Viewers will have to wait and see if their lives are changed forever, or if they can move on from whatever the surrogate mother has been hiding.

Spoilers: Kim exacts deadly revenge on Andrea in Emmerdale as she locates her?

A Hunger Games Prequel Movie Is Coming With President Snow As… The Hero?