Flesh and Blood was back with the second instalment of the thrilling four-part drama airing on ITV. Over the next two evenings, viewers will come closer to finding out which family member died and who was the cold-blooded killer. However, during tonight’s episode, those watching at home were left confused by some of the comments Mary was making. Is she setting the scene for the murder and framing someone else?

Set on the Sussex coast, the story follows a modern family as it spirals towards a tragedy and possible crime.

In a series of flashbacks and present-day scenes, widowed mother Vivien (played by Francesca Annis) reveals her new love interest, Mark (Stephen Rea) to her children.

But “nosey neighbour” Mary (Imelda Staunton) has raised a few suspicions with her shady behaviour and last night, viewers were convinced she has something to do with the crime.

However, it seems she is not working alone, with some suggesting she and Mark are in cahoots with one another. 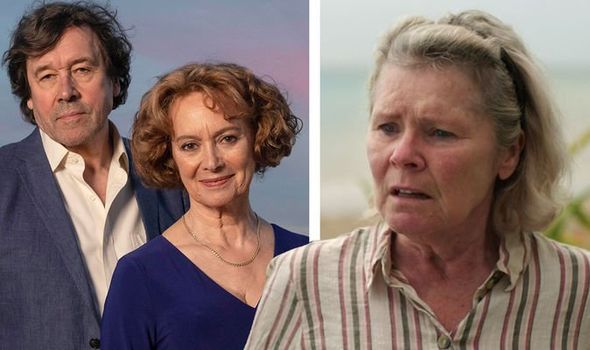 After decades of living within metres of the sea, Vivien decided she was going to sell the family home in which her three children grew up in.

Understandably, her offspring were not delighted by the idea, but nevertheless, they each set about moving their belongings out of the property.

When it was Jake’s (Russell Tovey) turn, he popped by Mary’s to ask her if he could keep a few boxes at her house, and during the conversation, the neighbour began planting seeds of doubt.

“Mary, how are you? Could I leave these with you for a few weeks?” He asked and Mary said: “Of course you can! How are things? With Leyla?” 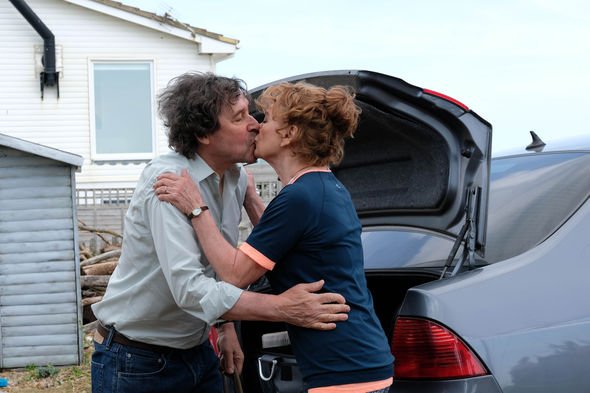 “Yes… I think we’re getting there. I think, hope. There is quite a few more of those [bags],” Jake added.

“It’s fine, it’s fine. Such a shame though that you mum’s move isn’t it?” The neighbour commented.

“But it’s not done yet Mary, we’ve still got time to turn that ship around,” Jake remarked, but Mary wasn’t convinced: “I don’t know about that, not with her new car if it’s anything to do by! He’s obviously done well for himself hasn’t he?”

Jake said: “It’s a bit too flashy for my liking,” and Mary continued: “Although, I suppose he could have bought it on credit couldn’t he? Well, people do don’t they these days, ‘buy now, pay later’. Whereas we always had to save up for things. Anyway, get your bags, I’ll put the kettle on.” 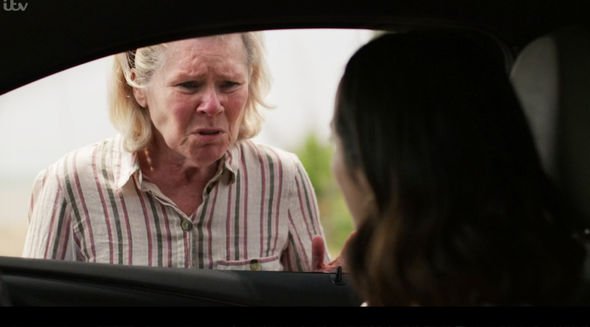 This wasn’t the only occasion, near the end of the instalment, Natalie (Lydia Leonard) arrived at the house to grab her things and took the opportunity to ask Mary a favour.

“Mary, can I ask you a favour – it’s about mum,” she said and Mary replied: “She’s in Spain with her boyfriend?”

“Only he’s not her boyfriend, he’s her husband now,” Natalie explained which shocked Mary to the core.

“Yes, they got married in Gibraltar. I know, we all feel the same. Do you mind keeping an eye on her? We’re all a bit concerned it’s happened so fast. Call me if anything’s not quite right, thanks Mary,” the youngest child said.

Natalie then walked back to her car, put a box in the boot and buckled up, but before she drove off, Mary emerged at the driver’s window and suspiciously asked: “Natalie, I’m just wondering, what did his [Mark’s] first wife die of?”

Taking to Twitter to discuss the possible theories, one said: “Mary is planting seeds of doubt in the children’s head so it looks like they all planned it together to murder him #FleshAndBlood.”

“#FleshAndBlood love how the neighbour is planting seeds of doubt with each of them, he just happened to be there when she was Ill, nicking the blueys and mentioning getting the car on credit…..is she a goodie or a baddie?” Someone else questioned.

“Nah I’m right Mary and Mark are in this plot together #FleshAndBlood,” another stated.

Flesh and Blood returns tomorrow evening at 9pm on ITV.

Ed Sheeran paid himself £73.4million last year in earnings from his Divide tour — which is £201k every day – The Sun