Home » TV & Movies » Friends and pho farewell GoT, the show that marked many a milestone

Promising epic battle scenes, the resolution of tumultuous love affairs and, yes, at least a couple of dragons, the finale of HBO's Game of Thrones will air in less than 10 days' time. As a devoted fan, I'm more than ready to see a conclusion to this convoluted but addictive story. But I'll also bid the series goodbye with a genuinely heavy heart.

I began watching Game of Thrones back in 2013 with my two Sydney housemates, well before streaming services like Netflix and Stan arrived in Australia. Every Monday evening when a new episode dropped, the three of us would gather in the lounge room and eat bowls of Vietnamese noodle soup. 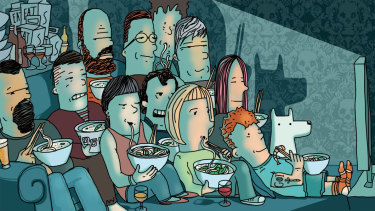 ‘The scale and complexity of the Uber Eats order during season six rivalled the show’s epic storyline.’Credit:Drew Aitken

For a newly formed household of single 20-somethings, it was an important weekly moment of togetherness. A routine we nicknamed "Game of Pho" was forged simultaneously with our Generation Y family.

The magnetic allure of our Foxtel subscription meant that by season four, we were generously inviting guests along to Game of Pho. Boyfriends and girlfriends came and went, along with the occasional one-night stand who had seriously outstayed their weekend welcome. Colleagues, relatives, interstate visitors and even some of their pets benefited from our hospitality. The only rules? No talking during the show and never order off the menu: this is Game of Pho, not Game of Fried Rice or Laksa.

As the seven kingdoms delivered more bloodshed, gratuitous sex scenes and political intrigue, and even brought a beloved character back from the dead, our world turned, too. The seasons passed, just as they did in our real lives.

While we were living together, each housemate met and fell in love with the person they'd go on to marry. By season five, these romances had expanded the Game of Pho hosting group to six.

As time marched on, so did the Army of the Dead, and we shared milestones both happy and sad. One of us fell pregnant, one came out as gay and, eventually, one announced he was relocating to London.

Unable to relinquish a beloved tradition, my husband and I recommenced Game of Pho in 2015 when we moved to Melbourne. I even conned one of my original housemates into living here, too. The viewing party has expanded and contracted, accordion-like, as new friendships have been made and relationships formed. At its peak we reached almost 20 people. The scale and complexity of the Uber Eats order during season six rivalled the show's epic storyline.

A rough tally of regular attendees over the years tells me there have been eight weddings, two of which wouldn't have been lawful when the series began. Ten babies have been born, including a set of twins and one who was delivered halfway through the current season. We offered to relocate viewing to the birthing suite but were politely declined. Through eight seasons airing over nine years, we've bought houses, started businesses, lost parents, been made redundant, commenced new jobs, and survived physical and mental illness.

Shortly after season seven finished, I was diagnosed with a brain tumour. Among my myriad thoughts and fears, I remember saying to my husband, "What if I die without knowing who finally sits on the Iron Throne?" I was only half-joking.

The final instalment of Game of Thrones is a major television event, expected to be watched by hundreds of millions of people across the world. Some have been frustrated by the slow annual (or even longer) release of each season and the weekly drop of episodes. On the contrary, I've loved it. The gradual release may be old-fashioned, but it's also produced suspense and established a sense of occasion. People don't share entertainment the way we used to. Streaming and on-demand TV mean we're all watching something different and on different schedules in our technology silos – quite unlike when Game of Thrones first aired.

Nowadays you can't discuss or debate the drama from the latest episode for fear of spoiling someone else's enjoyment. Our Game of Pho tradition, however, has given us the chance to experience entertainment together. In 2019, that kind of communal viewing event is otherwise reserved for sporting matches and trashy reality TV.

Game of Thrones is famous for its treachery. The characters tear one another down in the unflinching pursuit of power. Ruthlessness, double-crossing, cruel lies and the deepest, darkest of secrets have defined the plotline. Yet somehow the divisive world of Westeros has brought my friends and I together. Every episode. Every season. Every year.

On May 20, we'll drink in the movie-length finale of a show that accompanied our coming of age. There was some talk of alternative dining options to mark the occasion. They've thankfully been dismissed. Instead we'll settle into couches, chairs and cushions flung on the floor, with the fire burning in the background, to drink our soup and loudly slurp our noodles.

To read more from Good Weekend magazine, visit our page at The Sydney Morning Herald, The Age and Brisbane Times.