Pedro Costa is not the most obvious Oscar contender. The director of “Vitalina Varela,” a slow-burn atmospheric character study about an immigrant woman confronting her past, has never been keen on self-promotion. But now that “Vitalina Varela” is the Portuguese submission for Best International Feature Film, he has no choice.

“This is the part where I’m supposed to put a smile on,” the 62-year-old director said in a recent interview. He attempted a dry laugh that did not come naturally to him. “I would love for a different type of people to see this film. If they’ll watch it because of this Oscar thing, great.”

And they should. Costa has been making rich, ambitious documentary-fiction hybrids since the ‘90s, but they rarely get noticed much beyond the festival circuit. Nearly all of his films take place in the same rundown immigrant community of Fontainhas, in Lisbon, where he unearths faces and historical frustrations otherwise unseen at the movies. He works closely with locals, most of whom migrated to Fontainhas from Cape Verde, to develop haunting, immersive documents of their impoverished lives.

“Vitalina Varela” consolidates that approach into a poetic docudrama about the plight of its title character, who returns to the neighborhood to bury her husband after living abroad for years. Like most of Costa’s work, the movie unfolds as an entrancing gothic mystery told in light and shadows, with painterly images and intimate monologues that manifest like some treatise from a forgotten realm. “There’s not much hope around these places,” Costa said. “Everything is a little broken.”

As living remnants of brutal colonization and social hierarchies, many of the Fontainhas residents struggle to survive on the margins. Costa has turned their stories into grand literary investigations. Over the years, with movies such as “Colossal Youth,” “In Vanda Room,” and “Horse Money,” he has transformed the neighborhood into a recurring cinematic backdrop loaded with complex people ignored by much of the modern world. “I’m not from that class, and I’m not from that language,” Costa said, referencing the Cape Verdean Creole spoken in the films. “I know I’m not one of them. But that means I have to work within this border of the unknown, by reaching out to these people.”

“Vitalina Varela” does that in particularly engrossing terms. The movie, which stars its titular woman playing a variation of herself, has been winning over audiences since it took the top prize at the Locarno Film Festival in 2019. It opened theatrically a year later, and in January, Portugal selected it as its Oscar submission.

The movie has some high-profile supporters in the Academy, Willem Dafoe among them. “The performers and the camera are so unblinkingly patient and hauntingly present that you can’t help but empathize and take their story to heart,” the actor wrote via email. “As dark as the story and the photography is, the effect is humanizing thanks to simplicity, nobility, and grace of the filmmaking.”

Still, the slow-burn drama benefits from the theatrical experience rather than the streaming portal on which Oscar voters are perusing their options at the moment. Dafoe said he hopes they’ll give it a shot. “Clearly, Pedro’s work isn’t an entertainment, and not for everyone,” he wrote, “but it is very pure cinema.”

However, audiences willing to engage with Costa’s work will find that the emotion creeps into each dazzling frame and eventually becomes undeniable. Despite the precise formalism and his experimental approach, “Vitalina Varela” could be the most heartbreaking Oscar contender in this unusual season, as it captures Varela’s struggle to confront the life she left behind. 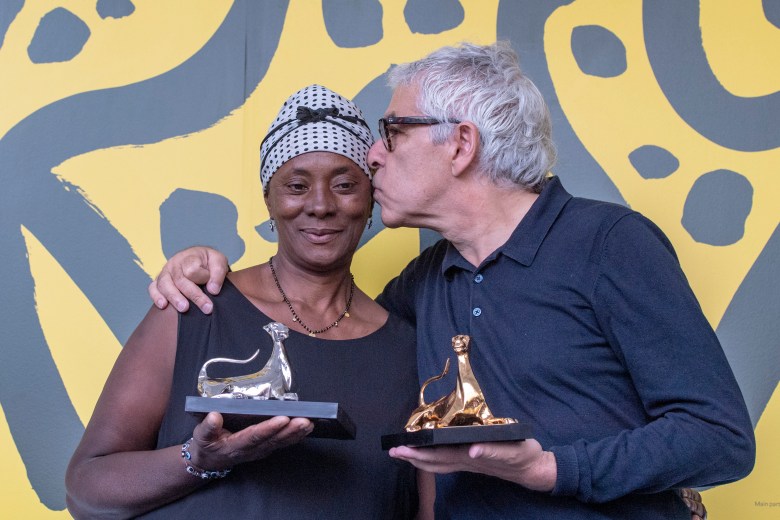 Vitalina Varela and Pedro Costa after winning the Golden Leopard at the Locarno Film Festival.

Returning to Lisbon in the hopes of reuniting with her estranged husband, she discovers he died three days earlier, and spends the bulk of the movie roaming the cobblestoned neighborhood and whispering to the life she left behind. In the process, she finds some measure of companionship: Ventura, the Cape Verdean resident who suffers from a neurological disease that causes his hands to shake, appears in several earlier Costa films. Here, he plays the priest of an abandoned church who helps Varela contend with her grief. “These people are buried in the ghettos, the awful societies they live in,” Costa said.

To that end, Costa’s work is a kind of representational advocacy. “I would like these films to connect with the brothers and sisters of the people on the screen,” he said. Each of his projects leads to the next. While shooting 2014’s “Horse Money,” Costa went door to door in Fontainhas looking for houses to shoot in. By chance, he came to Varela’s home, and wound up shooting her as she recounted her experience coming home after her husband’s death.

The monologue made it into the final cut and set the stage for Costa’s next project. “When Pedro came to my door, I was afraid he was going to ask for my documents,” Varela said by email. “A person without documents is doomed.” She had been lingering in the tragedy of her life and the dream of an idyllic family life that left her long ago. “There was nobody here for me, no family to help me,” she said. Collaborating with Costa had a cathartic effect. “He helped me a lot, made me strong, gave me courage,” she said. “Sometimes I felt like I was about to break, but Pedro said, ‘We’ll make it.’”

The movie tracks Varela’s grieving process, but also engages with the psychological challenge she faced in working through old memories to find some measure of hope for the future. Varela said the movie “is for all the women who suffer. My husband died, I had that damned cross on my shoulders, and I couldn’t move. When that cross fell, I was free. All the women who’ll see my pain, one day, they will also be free.”

Costa’s approach exists in a class of its own. His delicate mise-en-scene puts him in league with Andrei Tarkovsky, with each frame delivering a museum-worthy composition, but his naturalistic storytelling technique owes more to the looseness of neorealism. He develops each scene with his actors in real time. “I hate scripts,” Costa said. “I prefer to live with the people. Vitalina and Ventura are the best screenwriters. We never put down their words, but we use memory and inner feeling to cultivate the text, so we don’t have to write.”

Varela had to adapt to Costa’s approach over the course of the production, especially since many scenes required her to sit quietly for long periods. “We talked for months in my house, my room, and while going for long walks,” she said. “I learned to move like a cat, to feel everything just with my eyes.”

Costa’s work has played at virtually every major film festival, but doesn’t always stand out next to flashier titles. While Locarno programmed “Vitalina Varela” in competition, it went to the experimental sidebars of Wavelengths and New Frontier at TIFF and Sundance, respectively. Former Locarno artistic director Lili Hinstin said the movie, Costa’s second to play in Locarno’s competition, stood out “as a western full of sound and fury, carried by a female main character of unheard-of power.” She was especially engaged by the way the movie merged its bleak existentialism with a profound visual tapestry. “One can only bow to the plastic sumptuousness of this work,” she said. When “Vitalina Varela” won Locarno’s Golden Leopard, jury president Catherine Breillat called it “a major film in the history of cinema.”

Nevertheless, Costa accepted the narrow appeal for his work a long time ago. “I have a very special, targeted audience,” he said. “I want this movie to sort of avenge Vitalina’s pain and show it to the other women in the neighborhood, in the community, in Portugal. And, if we could, to all immigrants or women in the same conditions.” Varela was moved by the opportunity to screen the film to her neighbors after it won Locarno. “Everybody came,” she said. “I think they recognized my soul, our soul, and there is something in there for each and every one of us.”

Like many filmmakers worldwide, Costa has found it difficult to work during the pandemic, but it’s nothing compared to the challenges faced by the residents of Fontainhas, many of whom work in the service industry. “They never stopped working, so they were the first affected, and they continue to be the worst affected,” he said. But the struggle was not new to them. “They have lived in reclusion or confinement for centuries,” he said. “They have been condemned for a long time. This is something they know.”

Varela acknowledged the struggle of daily life. “This cruel disease is very serious for people like us, immigrants, who have to work — rain or shine,” she said. “We have to ride the trains and the buses. We have to bring bread to the table.” She was finding solace in her garden, a clandestine spot next to the highway. “I can be there all day,” she said.

No matter what the future brings, she added, she expressed her admiration for Costa’s impact on her life. “If I hadn’t met Pedro, maybe I would not be alive today,” she said. “I haven’t stopped working with him since.”