How to make the best of the spectacle of dysfunction known as 2018?

Let’s call it The Year Of The Pissed-Off Kids.

On Monday night, Q&A reminded us that there has actually been some good to be found in this bastard year of the baffling and bewildering.

We met Marco Bellemo, who asked a question about climate change, in the wake of last Friday’s nationwide student strike that clogged Australian cities and towns in a youthful call to arms in defence of their own future. 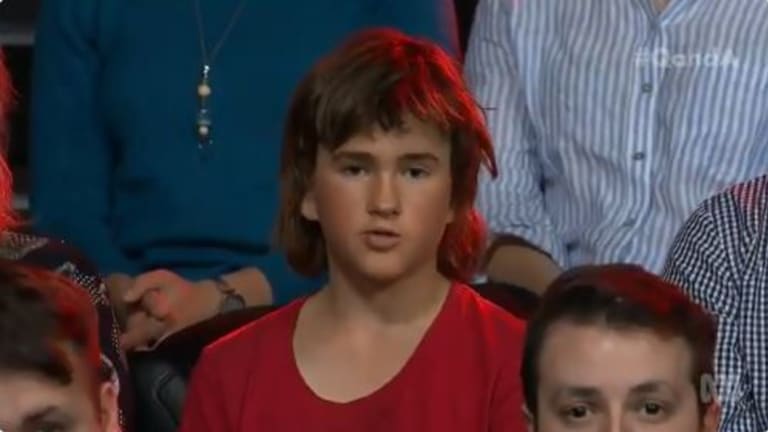 Marco Bellemo stole the show on Monday night with a question about climate change.Credit:ABC

Bellemo: “I'm greatly concerned about my future and the future of children all around the world who will suffer the consequences of climate change more than anyone else. A few days ago, thousands of students from around Australia, like me, went on strike from school to demand that the government acts on climate change.

"When will the government start to care about my future and children around the world by acting on climate change and create a strong climate policy?"

Host Hamish MacDonald: “Were you involved in organising some of the demonstrations?”

Bellemo: “I helped to get my school involved, yes.”

Bellemo and his fellow student activists have been mocked in recent days with federal minister Matt Canavan leading the charge in suggesting Bellemo and his ilk were headed only for the dole queue.

But the voice and face of the revolt on Monday night painted a different picture. Bellemo was no dill headed for a dole queue.

Student activism has many precedents over decades, but in 2018 it resonated especially strongly. It’s been the year of the teenage revolt in the US after the Parkland school shooting in February, a tragedy that sent survivors out on a potent public campaign for gun control.

Their message: we may not yet be able to vote, but we do have a voice.

Former Liberal Party minister Amanda Vanstone had a bob each way, supporting the right to protest but questioning the ideas she suspected were being put in their young heads.

"I think you can have a very useful exercise in understanding democracy by taking part in a protest," she said.

"You can have a useful exercise in it, if it’s run properly and you don’t miss too much school… but it makes me sad to hear a young person say, ‘people don’t care about my future’. Both the major parties have got policies, they disagree about it, but both major parties have got policies. Emissions are coming down… to give the impression to young people that nobody cares about them I think is a bad thing."

Bellemo was not for turning: "I feel very saddened to see the inaction, the political inaction on climate change. And it is about the future of future generations. These decisions made by politicians are going to affect future generations [and] have such great affect on them.”

Macdonald: “So when you hear Amanda Vanstone say both major parties do care about young people, do you believe that?”

Bellemo: “I don’t believe that, because I see the Liberal Party still wanting to build new coal, when we should clearly be transitioning to renewable energy to help save lives… climate change is killing people, it’s causing so [many] natural disasters, we need to transition. And if you’re supporting the fossil fuel industry then you don’t truly care about the future generations.” 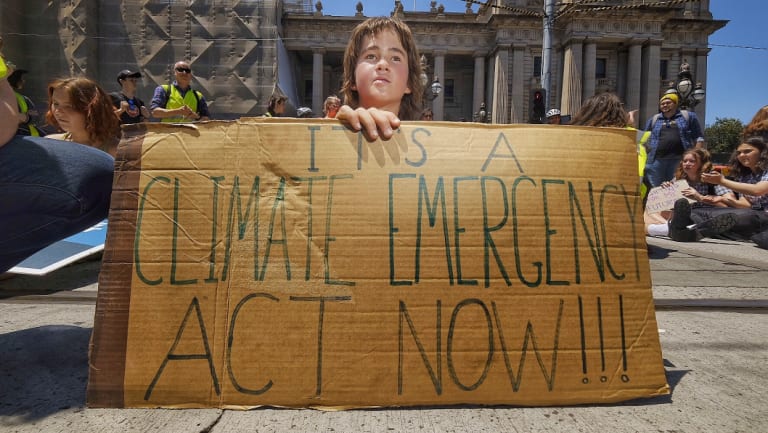 Marco Bellemo, 17, was one of thousands of students who protested the government’s inaction on climate change in Melbourne.Credit:Luis Enrique Ascui

It was Bellemo’s night, on a night that brought together a curious combination of combatants on the program’s penultimate show of the year.

Should there be an early election?

Macdonald: “It's hard to focus on the business of government or get people to pay attention to it when the whole place seems to be on fire.”

Reynolds: “There is messiness in our parties at the moment but the government and the Parliament still goes on.”

Vanstone, in answer to the same question and with a swipe at Malcolm Turnbull: No.

“If it was up to me I wouldn't call an election because someone told me to, especially a PM who had a chance to go earlier himself and didn’t.”

On the bullying of women in Parliament, after the defection of Liberal MP Julia Banks to the crossbenches, Vanstone ventured: “Poor Julia Banks was bullied. Unless I've been in some coma, I haven't read what bullying she was subjected to, by whom and when? I'm a bit annoyed at the people who say, ‘I've been bullied’. Have you? Let's deal with it.

"But just, ‘I’ve been bullied and I want attention for it, and I'm leaving because they bully me’ – if I was there, I wouldn't be putting up with it.”

Old voices were still shouting, but one voice was there to sing, as well as debate.

Billy Bragg closed the show with his 2017 song with a climate-change theme, King Tide and the Sunny Day Flood.

He opened it with this: “I want to dedicate this to Marco and his mates.”

It was Bellemo's night. Time will tell whether it was also a useful signal to his future.

How old is I Hate Suzie star Billie Piper and what’s her net worth? – The Sun