We’re at that point in the current series of I’m a Celebrity… Get Me Out of Here! where the contestants are dropping like flies.

But have you noticed a link between the latest three eliminees? A handful of sleuths on Twitter have:

Yep, the first three eliminations where all campmates could be voted for (Noel was one of only two celebs eligible when he was voted out) all led to a soap star getting the boot.

When this year’s line-up was announced, we were thrilled at the lack of reality TV stars and not one or two, but three soap stars. It looks like the voting public doesn’t feel the same way, though. 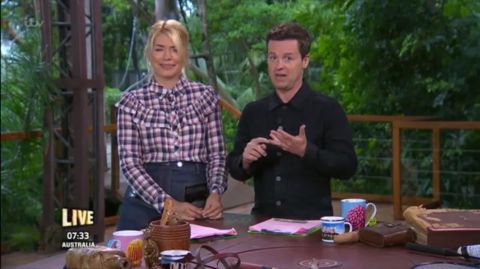 Conspiracy theories have also run rampant on social media about each eviction, with viewers claiming behind-the-scenes feuding and producer meddling had a hand in the previous three leaving.

ITV has denied those conspiracy theories, while Dec Donnelly has mocked them both on social media and directly on-air during I’m a Celebrity episodes in recent nights. Will more fix theories pop up?

Find out when I’m a Celebrity…Get Me Out of Here! continues on Wednesday (December 5) at 9pm on ITV, followed by Extra Camp directly after on ITV2.