The new Bond film is tearing the roof off – literally, it would seem. Reports emerged this week from Pinewood Studios that an explosion on the film’s set on Tuesday destroyed part of a sound-stage roof and tore off large chunks of exterior panelling, as well as causing a “minor injury” to a crew member.

The explosion is the latest setback to affect production of the film known as Bond 25, the 25th and latest in the hugely profitable series based on Ian Fleming’s books that began in 1962 and has earned well over $2bn worldwide. The UK’s Health and Safety Executive has announced it is to make inquiries into the incident, though it as yet has stopped short of a full investigation.

Bond 25 has been hit with a series of problems that, though in some ways not unusual for a production of its scale, are causing repeated delays and suggest a sense of crisis is enveloping it, and there is even talk of a “curse”. Shooting had to be cancelled after lead actor Daniel Craig injured his ankle in May and needed surgery that put him out of action for a fortnight. Producers have hired multiple writers to rework the script – most eyecatchingly, Fleabag’s Phoebe Waller-Bridge, only the second woman to receive a writing credit on a Bond film, who has called for the series to “evolve” and “treat women properly”. And a recent launch event in April, streamed live on Facebook from Jamaica, proved a disappointment, with lead producers Barbara Broccoli and Michael G Wilson unable to confirm the title of the film, due to be released in less than a year’s time, in April 2020.

Arguably the most significant setback, however, occurred in August last year, when the original director, Danny Boyle, abruptly left the project over “creative differences”, meaning Broccoli and Wilson had to start again almost from scratch, with no way to meet the original planned release date of autumn 2019. A month later, Cary Fukunaga was announced as Boyle’s replacement. 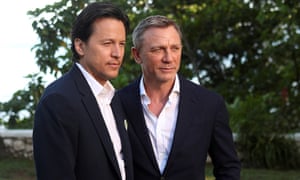 Part of the difficulties the Bond film is facing is a result of its attempts to overhaul and reposition a series that – despite the strength of its traditionalist appeal – looks in danger of becoming rapidly outdated in the current climate. “There’s no doubt that the 007 franchise needs to make a big effort to be fresh and current in the age of Time’s Up,” says Anna Smith, chair of the London Film Critics’ Circle and host of the Girls on Film podcast.

“Though Bond films are hardly woke, representation has been improving over the years, though I think there is still a long way to go when it comes to female characters – the cavalier treatment of Monica Bellucci in Spectre springs to mind. I’m excited to see what Phoebe Waller-Bridge does with the script, and if it takes time to get that right, I’m ready to wait.”

Crisis has never seemed far away in the Craig era, with the actor repeatedly sustaining injuries since taking on the role, including losing two teeth in a fight scene in Casino Royale and having a fingertip sliced off during Quantum of Solace. External factors have also contributed: the 2007-08 writers strike hampered the production of Quantum of Solace, with Craig admitting he rewrote scenes with director Marc Forster, and a financial crisis at parent studio MGM in 2010 meant extensive delays before Skyfall could get under way.

However, the extraordinary box office success of Skyfall and its follow-up, Spectre – the second and third highest-grossing films of all time in the UK – has meant that the series has had to cater to growing fan demands and wider scrutiny in the press and social media.

Smith says: “The challenge will be balancing political correctness with reassuring their core audience that James Bond is still a traditionally ‘masculine’ man and avoiding a backlash. Trolls are very quick to panic about their favourite franchises going feminist – often just based on a trailer. But I hope there are many other Bond fans who would welcome further progress.”

Adam Sandler Signs Up for Four More Films With Netflix

Eurovision fans call for Graham Norton to be replaced on BBC show: ‘He’s had a good run’