Thomas Markle reveals when he last spoke to daughter Meghan

Following his daughter Meghan Markle and her husband Prince Harry’s tell-all interview with Oprah Winfrey earlier this week, Thomas Markle joined Piers Morgan and Susanna Reid to discuss the fallout on Good Morning Britain. During the CBS interview, Oprah had quizzed the Duchess of Sussex on whether she felt “betrayed” by her father after he’d denied speaking with tabloids, something he’s gone on to take responsibility and apologise to the two for. He reiterated this apology today but also pointed out he felt he and his family felt they weren’t supported.

After discussing the setup paparazzi shots Thomas had organised in a bid to build his public image, Susanna asked: “When Megan said to you why have you done that, did you discuss that?

“I denied it,” Thomas admitted before Susanna continued: ‘Do you wish you’d done something differently?”

“I wish I hadn’t done the whole thing,” Thomas said.

However, he did explain: “But here’s the other side of this coin, no-one took any time to protect any member of this family, we were attacked by the press every day – nobody was there to care for us.” 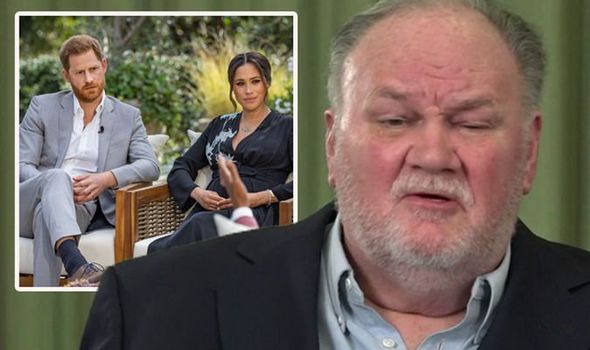 Thomas was also played the moment from Meghan and Harry’s interview in which they discuss the supposed “betrayal” from her father.

The question didn’t air as part of the main interview but was released post-broadcast.

In it, Oprah asked: “Did it feel like a betrayal when you found your father was working with tabloids?”

Meghan responded: “I’m just trying to decide if I’m even comfortable talking about that, if we’re gonna use the word betrayal its because when I asked him, he said ‘no, absolutely not.'”

‘Back the UK for once!’ Charlie Stayt infuriates BBC viewers in Eustice fishing row