Ekin-su Cülcüloğlu and Davide Sanclimemti may have won Love Island by a total landslide, but it was clear to see Luca Bish was stunned.

Laura Whitmore announced Ekin-su and Davide beat Luca and Gemma Owen in the Love Island final, and confirmed the twist giving either of the winners a chance to take the entire prize money and run had been scrapped.

While the nation has been besotted with Ekin-su and Davide, they were picked as the least compatible couple by all the other islanders just days before.

After Luca confronted the other islanders who also voted for him and Gemma as among the ‘least compatible’ of the final five, it seemed pretty clear he wasn’t going to take losing lightly.

In the final episode of Love or Lie Island of the series, our resident body language expert Judi James to a look at Luca’s reaction, insisting he was visibly ‘caught off guard’.

‘What was interesting, though, when you look at him and they were waiting for the result when he was still in the running, he was really struggling to hike his mouth up into a smile and again,’ said Judi.

‘I think he was trying to remember to smile and this horrible rictus grin was coming up but of course after the other two won you’ve got a shot of him frowning and then suddenly realising “the other cameras are on us”.

‘It’s called a lightning smile which is when it comes from nowhere and then it vanishes to nowhere as well. You know a smile takes a long time to go through the face and it starts with the eyes. He’s just trying to do it with his mouth and it looks completely lacking in any authenticity.

‘He did say something to Gemma, I’m still thinking that they’re quite surprised that “the actors” won it whereas they perhaps felt that it should have been themselves who they see as “the real couple”. 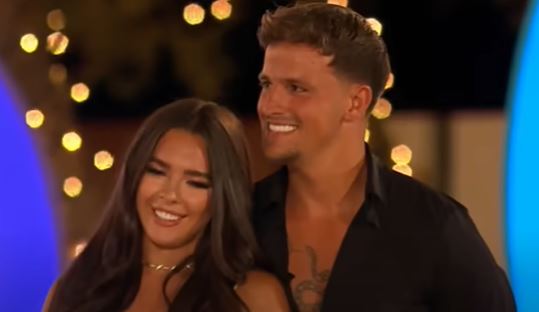 Judi dug deeper into Luca’s shock, adding: ‘You can see his thought process al the way through the run. He starts to do this staccato head movement when he’s trying to work out what happened and gives eye dart, but then he’ll react.

‘I think a lot of the others have been a lot better at sitting back and smiling politely.’

Luca could be in for a shock when he discovers Ekin-su and Davide not only won Love Island, but they got more than 60 percent of the final vote with Gemma and Luca coming in second with just 14 percent.

After their win, they told fans: ‘‘Thank you everyone for voting [for] us and thank you for making us who we are.’

Jumping in, Davide added: ‘I didn’t expect it. I still don’t believe it.’

‘I can’t believe it,’ Ekin-Su agreed. ‘I think everyone’s winners in here and I just feel really lucky to be here.’

‘We’re all four great couples but yeah thank you for everyone,’ Davide said graciously.

Still beaming from cheek to cheek, Ekin-Su told fans: ‘Thank you for everyone for going on our journey with us, it means so much, so much.’

Love Island returns for The Reunion this Sunday at 9pm on ITV2.

Say hello to your social lives once again – Love Island 2022 is over, with Ekin-Su Cülcüloğlu and Davide Sanclimenti being crowned the winners in an epic final.

If you missed it, don’t fret – here are the highlights of the end of a brilliant series: