Home » TV & Movies » Piers Morgan hits back at Donald Trump for unfollowing him: ‘I’m over it’

Donald Trump, the President of the United States, saw a lot of press coverage over the weekend as he was seen giving his daily press conference to discuss the ongoing coronavirus pandemic. During his press conference on Thursday, Trump suggested it may be beneficial to look into “ingesting” disinfectant in some way to combat the growing numbers of coronavirus.

Following this Trump was met with a huge amount of criticism, as the press and public alike pointed out this was not good advice.

The blowback from his comments eventually prompted Trump to come out and respond to the criticisms.

During Trump’s response he claimed he was being “sarcastic” to the reporters in front of him. 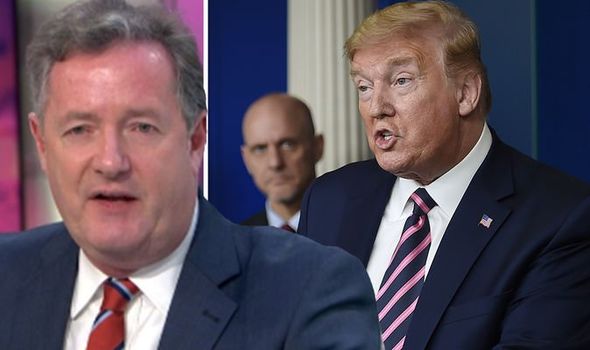 Ferguson staunchly defended Trump and maintained the President was not suggesting American citizens ought to ingest the disinfectant.

Morgan explained: “My argument for Trump is: He is talking himself out of office.”

Ferguson responded: “Well, people have been saying he’s been talking himself out of office for three years, so.”

After discussing the issue at length, Reid chimed in to announce there has been a “seismic split” between Trump and Morgan – as the President unfollowed her co-host on Twitter.

Almost mocking Morgan about this issue, Reid asked: “How did that feel?

Morgan simply replied: “I woke up, saw that I had been unfollowed.”

He then took a deep breath, before adding: “And… I’m over it. We’re good.”

Last week saw Piers receiving a number of Ofcom complaints after he grilled Minister of Health and Social Care Helen Whately on the show.

But shortly after the complaints, Piers apologised to the organisation for asking his followers to speak out.

Speaking out on his Twitter, he wrote: “Apparently nearly 2000 people have now complained to @Ofcom about me grilling Care Minister Helen Whateley too ‘unfairly’ when she couldn’t answer even basic questions.

“If you think I should continue grilling ministers in the way I’ve been doing, please tell @OFCOM. Thanks.”

Ofcom’s official page obviously received a number of responses, forcing it to step in and respond to Piers directly.

They wrote: “Dear Piers, We’re usually happy with you keeping us busy. But right now we’re struggling to keep up after you asked your followers to contact us.”

He wrote back: “My apologies… I underestimated the scale of public support.”