Performers whose Oscar chances could get a boost on Sunday include Carey Mulligan, Frances McDormand, Maria Bakalova and Yuh-Jung Youn 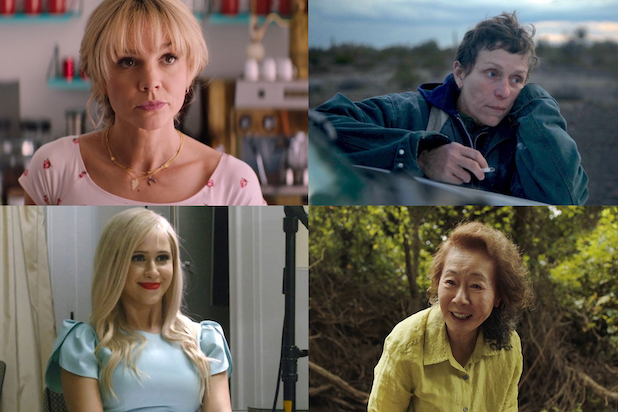 The Screen Actors Guild Awards, which will take place on Sunday in a scaled-down, pre-taped, one-hour ceremony, will probably tell us a few things we already know about this year’s awards races, and maybe a few things we don’t about a couple of tight races.

The chances that they can create turmoil in the Best Actor and Best Supporting Actor races are slim, but there’s a lot at stake in the two actress categories at the SAG Awards, and the opportunity for the guild to christen real front runners.

Carey Mulligan, Frances McDormand or Viola Davis? Maria Bakalova, Yuh-Jung Youn or Glenn Close? Those are confusing races at the moment, but they may be less confusing by 7 p.m. on Sunday night.

Then again, the SAG Awards can be a reliable Oscar predictor, but it’s also sometimes a lackluster one.

Last year, for instance, all four of the 2020 SAG winners — Joaquin Phoenix for “Joker,” Renee Zellweger for “Judy,” Brad Pitt for “Once Upon a Time … in Hollywood” and Laura Dern for “Marriage Story” — went on to win Oscars, while the surprise winner in the SAG ensemble category, “Parasite,” also won the Oscar for Best Picture.

But the year before that, only two of the 2019 SAG champs, Rami Malek and Mahershala Ali, did go on to win Oscars. SAG winners Glenn Close (“The Wife”) and Emily Blunt (“A Quiet Place”) did not; Close lost in an upset to Olivia Colman, while Blunt wasn’t even nominated for the Oscar, which was won by Regina King, who herself was snubbed by SAG voters for “If Beale Street Could Talk.”

Plus, the film that won the ensemble award in 2019, “Black Panther,” lost Best Picture to “Green Book.”

Over the last decade, SAG’s individual winners have gone 4-for-4 five times, 3-for-4 four times and 2-for-4 once; its ensemble winner has won Best Picture five times and lost it five times, with four of those losses coming in the last five years.

We won’t know for another three weeks how accurate SAG will be this year (and, admittedly, it’s shortchanging the Screen Actors Guild to simply view it in terms of how it affects the Academy Awards). But here’s what we’re looking at in the five SAG Awards film categories: 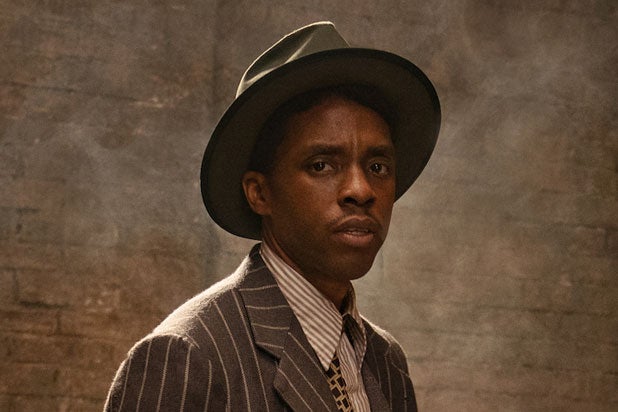 Outstanding Performance by a Male Actor in a Leading Role
The nominees match the Oscars across the board: Riz Ahmed for “Sound of Metal,” Chadwick Boseman for “Ma Rainey’s Black Bottom,” Anthony Hopkins for “The Father,” Gary Oldman for “Mank” and Steven Yeun for “Minari.” But Boseman is the prohibitive favorite for a posthumous award, both at the SAG Awards and at the Oscars.

If Hopkins or Ahmed manages to pull an upset, it’ll be shocking and we’ll think twice about this category being a slam dunk for Boseman. But don’t expect that to happen.

Outstanding Performance by a Female Actor in a Leading Role
Now, this category is interesting. It seems to be a close race between Carey Mulligan for “Promising Young Woman” and Frances McDormand for “Nomadland,” with Viola Davis a possibility for “Ma Rainey’s Black Bottom” and Vanessa Kirby less likely for “Pieces of a Woman.” Amy Adams got the fifth spot at the SAG Awards for “Hillbilly Elegy,” while Andra Day got it at the Oscars for “The United States vs. Billie Holiday.”

If Mulligan wins, as we suspect she will, she’ll solidify her position as a slight Oscar favorite; if McDormand does, she’ll boost her chances to win Best Actress and also make her a film even more of a Best Picture favorite. If Davis wins, who knows? 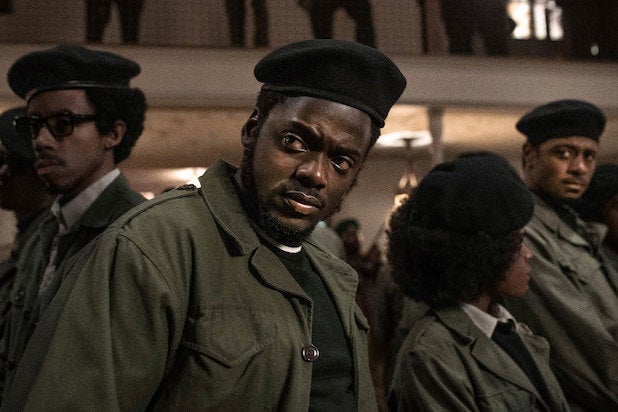 Daniel Kaluuya in “Judas and the Black Messiah” (Warner Bros.)

Outstanding Performance by a Male Actor in a Supporting Role
Only three of the SAG nominees in this category are also Oscar nominees: Daniel Kaluuya for “Judas and the Black Messiah,” Sacha Baron Cohen for “The Trial of the Chicago 7” and Leslie Odom Jr. for “One Night in Miami.” For the other slots, SAG chose Jared Leto for “The Little Things” and Chadwick Boseman for “Da 5 Bloods,” while Oscar voters went for Paul Raci for “Sound of Metal” and LaKeith Stanfield for “Judas and the Black Messiah.”

The Kaluuya/Stanfield split creates an interesting dynamic at the Oscars, one that could help Baron Cohen or Odom. But at SAG, this category feels secure for Kaluuya, who ought to go into the ceremony as the presumed favorite in the category and come out of it the same way.

Outstanding Performance by a Female Actor in a Supporting Role
Like the lead actress category, this one is a tight race. It’s between two nominees who are acting royalty, Glenn Close in “Hillbilly Elegy” and Olivia Colman in “The Father,” and two international actresses getting their first real U.S. exposure, Maria Bakalova in “Borat Subsequent Moviefilm” and Yuh-Jung Youn in “Minari.” (SAG also nominated Helena Zengel for “News of the World,” while the Oscars went for Amanda Seyfried in “Mank.”)

At the moment, Youn is a slight favorite, with Close and Bakalova close behind. Whoever wins here will become the Oscar favorite (unless it’s Zengel), which makes this a significant category, at least for appearances in the two weeks leading up to Oscar voting.

Outstanding Performance by a Cast in a Motion Picture
The shaky correlation between the SAG Ensemble Award and Best Picture got a boost last year: The SAG win for “Parasite” was the strongest sign to date that it could be a contender for the big prize at the Oscars. But of this year’s five SAG contenders, only “The Trial of the Chicago 7” and “Minari” are also Best Picture nominees; the other three films, “Da 5 Bloods,” “Ma Rainey’s Black Bottom” and “One Night in Miami,” can’t get an Oscar boost if they win.

“Chicago 7” and “Minari” are indeed the likeliest winners, unless SAG voters want a full-on Chadwick Boseman love-fest, and whichever one takes the prize will at least have a talking point in its quest to take down “Nomadland” at the Oscars. “Chicago 7” has the kind of huge cast that has often won this award in the past, but it could be very tempting for voters to move from their very popular win for the Korean film “Parasite” to another for the Korean-American indie “Minari.”

‘The Kingmaker’ Review: The Rise and Fall (and Rise?) of Imelda Marcos