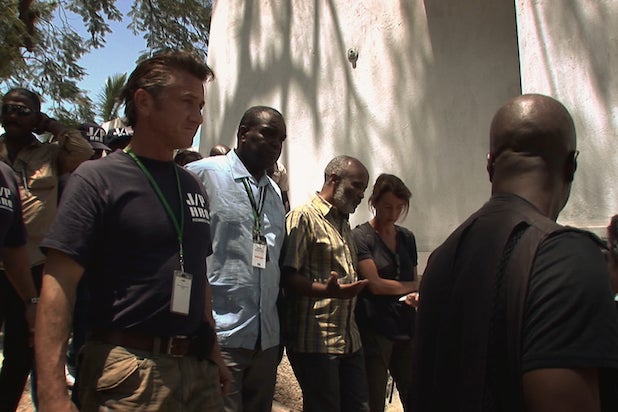 Discovery+ has acquired the worldwide rights to “Citizen Penn,” a documentary about actor Sean Penn’s humanitarian work in Haiti following the 7.0-magnitude earthquake that devastated the region in 2010.

The film is written and directed by Don Hardy (“Pick of the Litter”) and followed Penn over the course of 10 years as he and a team of volunteers set up a long base to bring aid to Haitians, including through his non-profit organization called CORE. Discovery+ plans to release “Citizen Penn” on its streaming service beginning May 6.

“Citizen Penn” ​chronicles the moment Penn and his team of volunteers landed in Haiti, just days after the earthquake struck, and the ten years since. The film offers viewers an intimate, honest, and self-reflective look into the triumphs and challenges of those who decided to do something. For Penn, Haiti changed his life. He went there for what he thought was a two-week aid mission to drop off supplies, help doctors provide immediate medical care, and then get out and get back to his normal life. Instead, he stayed and created an organization called J/P HRO (now CORE) that took over management duties for the largest camp for displaced people in the entire country.

Over the past few years, CORE has expanded its efforts across the United States, most recently organizing free COVID-19 testing sites across the country and running the nation’s largest vaccination site at Dodgers Stadium in Los Angeles. “Citizen Penn” also highlights the team and their current projects in the U.S.

“What Sean Penn and his team at CORE have been able to achieve is nothing short of remarkable. From a devastating earthquake in Haiti to the current situation with COVID-19 in the U.S., Don Hardy and Shawn Dailey captured the visceral urgency of their humanitarian work and stayed with the story for over decade, long after the national news crews all went home,” Igal Svet, vice president of documentaries and Discovery+ said. “It’s a privilege to share their incredible journey of grit, ingenuity and perseverance on discovery+ during a moment in time the world needs it most. CITIZEN PENN is about rolling up your sleeves and getting the job done, no matter who you are or where you come from.”

“From climate to conflict resolution, to poverty and Covid-19, citizenship increasingly requires service. Service itself can be a bumpy road, but one we all have to travel. Don Hardy traveled it with CORE (JP/HRO) for over a decade, and I hope his insightful filmmaking will find some form of inspiration for those who watch it. He shows the good, the bad, and the ugly,” Penn said in a statement.

“”Citizen Penn’ is a film about how you build an airplane while it’s already in the air and how you keep it flying after it has grown bigger than you ever imagined. Hopefully, CORE’s work will inspire others to step forward to help – volunteer, donate, get involved. This is not a time to stand on the sidelines,” Hardy added.

The acquisition “Citizen Penn” adds to Discovery+’s slate of documentary originals, including “Francesco” about Pope Francis that just launched this week, “Rebel Hearts,” which premiered at this year’s Sundance, and “Introducing, Selma Blair,” which won a prize at SXSW and is debuting later this year.

“Citizen Penn” was originally set to premiere at the Tribeca Film Festival 2020, but the film went on to win the Audience Choice Award at the Heartland Film Festival and played AFI Fest, Raindance and the Vancouver International Film Festival, among others.

The film was written and directed by Don Hardy, produced by Hardy and Shawn Dailey and executive produced by Ellen Fair, Kim Forbes Tramel, Dan Braun and Josh Braun.

WandaVision's Emma Caulfield Talks Dottie's 'Surreal Moment' — Plus, Did the Writers Sneak in a Buffy Reference?