Shadow and Bone is bulking up for Season 2 with four new characters and three more cast members promoted to series regulars.

The Witcher’s Jack Wolfe has joined the Netflix series as Wylan Hendriks — also known as Wylan Van Eck — a member of the Six of Crows who uses his mother’s maiden name while hiding out in the Barrel. 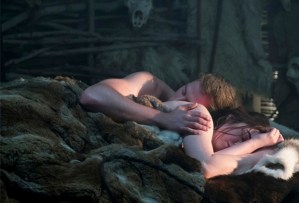 Daisy Head has been promoted to series regular as Genya Safin, the tailor for the Queen who conspired with Kirigan to spy on Alina and poison the King.

Plus, expect to see a lot more of Nina and Mattias. Danielle Galligan and Calahan Skogman, who play the Heartrender and Drüskelle who fell for each other after being shipwrecked, have also been upped to series regulars. In the finale, Nina betrayed Matthias (to save his life) by accusing him of being a slaver and having him sent to Hellgate for trial.

Adapted from Leigh Bardugo’s bestselling Shadow and Bone and Six of Crows novels, the series follows Alina (played by Jessie Mei Li), a seemingly ordinary young woman who crosses paths with General Kirigan (Ben Barnes), a powerful Grisha leader with nefarious plans for the Fold, after demonstrating the ability to summon light.

Season 1 ended with Alina absorbing the stag amplifier and using her light to guide everyone out of the Fold. Meanwhile, Kirigan — who was swept up by one of the monsters he created while fighting Mal (Archie Renaux) — was last seen leading his army of nichevo’ya outside of the Fold.

'90 Day Fiancé': Are Ed and Liz Still Together After 'The Single Life'?

'Willow' Sequel Series Confirmed to Be in Talks for Disney+