The next Scream film won’t be Courteney Cox‘s only return to horror in 2022: Shining Vale, Starz’s upcoming horror-comedy starring Cox and Greg Kinnear, will premiere on Sunday, March 6 at 10/9c, the network announced Tuesday.

Described as part-family comedy, part-classic horror homage, Shining Vale stars Cox and Kinnear as Pat and Terry Phelps, a married couple that moves to Shining Vale, Connecticut, in an attempt to save their relationship after Pat has an affair. But after relocating to an old Victorian mansion for their fresh start — the site of multiple murders, Pat and Terry later learn — Pat starts to see things move and hear the bumps in the night.

“Convinced she’s either depressed or possessed — turns out the symptoms are exactly the same – she’s also the only one who sees the spirit of the person who committed these murders: Rosemary, a ’50s housewife who may or may not be trying to take over Pat’s body,” the logline teases. “Everyone has their demons, but for Pat Phelps, they may be real.”

Scroll down to see Shining Vale‘s full key art, then drop a comment and tell us if you’ll be watching the show. 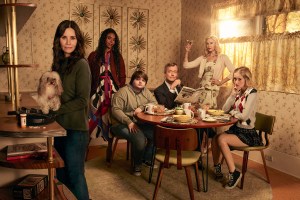 Ageism still lurks in Hollywood, according to analysis of female film characters